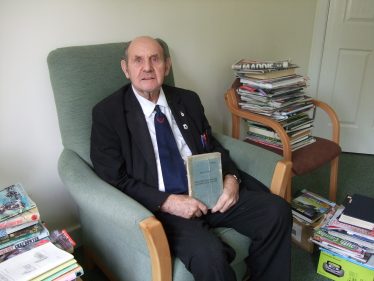 Don Chinery (aged 88) remembers Meldreth Football Club (3min 38secs)
A Transcription of this audio file can be found at the bottom of this page. 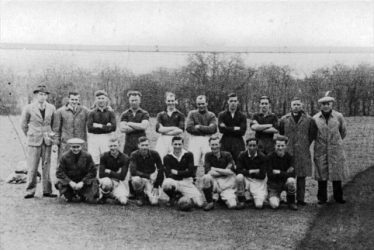 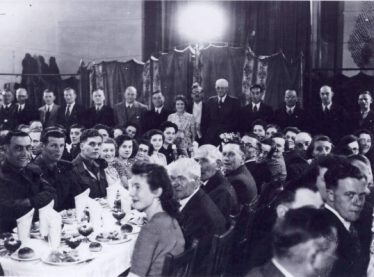 It appears from reports in the Royston Crow that Meldreth Football Club was disbanded in about 1930. In 1946 the club was revived and played at the Meldreth Manor House, home of Mr W Rathbone (now Meldreth Manor, a Scope School).

The Club’s history in the latter part of the 1940s is revealed by the following newspaper reports:

After sixteen years the Meldreth Football Club has been revived, and such is the enthusiasm displayed, that it is hoped to join the league next season.

Mr. W Rathbone has kindly agreed to allow play on his meadow.

A few friendlies have been arranged, commencing this week with a match at Fenny Lane. Names of the teams can be seen on the notice board, which is hoped that supporters will watch further activities.

Whist drives will also be arranged to augment the club funds. Mr.K Winter is to be commended for handing over the balance after a lapse of so long a time.

All local lads interested should get in touch with Mr. W Newell.

MELBOURN 0 – MELDRETH 3
The first post-war football meeting of the local villages of Meldreth and Melbourn took place on Saturday at the Bury Field, Melbourn and after a very keen and sporting game, ended in a win for Meldreth by 3-0.

The football was of the end-to-end type and both sides attacked strongly, but the defences held out until 30 minutes had elapsed when from a sustained attack, Cills* of Meldreth took a deliberate aim and lobbed the ball high into the net with the goalkeeper unsighted. Half Time: Meldreth 1, Melbourn 0.

In the second half the exchanges were very exciting and the Melbourn defence was hard pressed at times and eventually, from a good movement, the ball passed through the middle for Towl to pick up and score with a fast shot from close in.

Melbourn now pressed hard and were unlucky not to score, but Jude (in goal) was very safe. Eventually the Meldreth forwards again got away and E Waldock netted.

The result was in keeping with the run of the play and both sides are to be complimented on putting up such a clean game and the good crowd of spectators thoroughly enjoyed the sporting exhibition.

*(Ellis?) We are unsure if the spelling is correct.

On Saturday Meldreth entertained Foxton in the Cambs League and after an enjoyable game lost by 3-2. The game was very fast, both defences being tested,and as it developed it became a real ding dong struggle. Some 30 minutes of sustained attack by Meldreth ended in Towl getting away with a good effort to open the scoring. The success was short-lived as Foxton equalised immediately. Half time score: one each.

In the second half the game was still exciting and the local spirit prevailed as both sides tried hard to score. Eventually from a through pass by H. Waldock, Towl ran 30 yards to draw the goalie and score from some distance. Here Foxton pressed hard and after an offence for carrying, scored the equaliser. A penalty for alleged hands was awarded, but Jude scored only to see a free kick given just outside the area for a similar offence from which Foxton scored.

A draw would have been a fair result as both teams played a hard and sporting game.

Tomorrow Meldreth are at home to Haddenham in the Willingham Nursery Cup.

Football Club – The Annual General Meeting was held on Tuesday last week at the Clubroom, a very enthusiastic gathering of some 40 members being present.  The Chairman reported that the Club were fortunate in having received the permission of Mr G C W Palmer to use one of his fields for the season and all present were very appreciative.  The following officers were elected for the season.  1947-48:  President Mr Geo. Palmer;  Chairman Mr F Sims;  Hon. Secretary Mr K Waldock;  Hon. Treasurer Mr S Pearce;  Committee: Messrs. J Thurley, M Wing, T Howell, H Waldock, T Meikle, A Dazley, T Winter, H Jacklin;  Captain Mr F Mills;  Vice-Captain Mr E Waldock.  All members are requested to watch these columns for notice of ground practice and any intending new members should get in touch with the Secretary.

The first annual dinner and social evening of the Meldreth Football Club was held in the Hall, Meldreth on Saturday when over 100 members and their wives and friends were present.

The dinner commenced at 7.30 sharp and all agreed that the menu (as supplied by Mr R D Peacock of Royston) was excellent in every way.

After the loyal toast had been given, Mr F Sims (Chairman) proposed the toast of “The Meldreth Football Club” and gave the Club’s social and playing record over the past year.  He thanked all those who had helped in very many ways to put the Club in its present sound position and said the only worry they had at the moment was a ground for next season.

Mr D Cross (Captain) replied to the toast and said that although they had not been too successful on the field of play, he hoped they would all stick together for another season.

Mr Dazley (Treasurer) then proposed “The Visitors” which included Mr J Cox (Vice-President), Mrs Dainty, Mr J Farnham, Mr Spiller and the Falcon Club Quartet.  He stated how the Club were ever mindful of what they owed to the people of the village who supported the Club in lots of ways.

Mrs Dainty replied that the village was noted throughout Cambridgeshire for its united efforts and she was very pleased to be able to be present at such a jovial gathering of people and to know that the Football Club was such a success.

The final toast of “The Club Management” was then proposed by Mr K Waldock (Vice-Captain) who said how the players all appreciated what the Committee and Secretary had done for them during the season.

The Secretary (Mr. W Newell) replied that he had been pleased to help the Club in its first full season after being defunct for 16 years, which had been very helpful towards building up for the years to come.

The Club officials then signed a cheque and handed it to Mrs Dainty for the Red Cross Association in recognition of their willingness to help all and sundry at all times.

The Falcon Club boys then proceeded to give a good variety musical programme and Mr K Waldock and Mr Piggott kept things going until midnight when “Auld Lange Syne” was sung to bring the evening to a close.

The Club wish to thank all those who assisted in making the evening a memorable one.

I was one of the founders of Meldreth Football Club. The other people involved were Jim Winter, Darkie Waldock, a fellow from Shepreth, I can’t think of his name now, quite a big bloke from Shepreth, Harry Jude. Harry Jude was the goalkeeper. We used to play on one of George Palmer’s meadows. Over the Station Hill and you come round the corner you nip up Bury Lane or you come round the corner, there used to be a little shop there and there were some owners there, only one or two people, then you turned again and went round the corner and pardon the language we used to call it Cow Shit Corner.  You used to walk through what you call “The Meads”. It take me back a bit. The President was old George Palmer and he said you’ve formed a football team, he said when you play the first match I want to kick the first ball. We got the first match, playing a team from Cambridge ?? they used to call them, put the ball on the spot and he got out there and he said right – woof – and he just booted this ball and he walked off again.  He was quite happy he kicked off the first ball.  We finished up playing in the league but we played friendly matches for a start. Anybody you could get in touch with – Chishill, Barley, Barkway, all up round the hills. I was centre half believe it or believe it not they always used to call me “The Stopper”. The team was all local boys round the village and we played every Saturday in the winter months. To raise money we would organise anything we could to get a bob or two. I played football ‘’til I was well over forty but I got so I was getting slow in my movements so I thought it was time I packed the b*** game up. Yes I had some wonderful times.

Footnote: The Meldreth Football Club initially started playing on Mr W Rathbone’s meadow and moved to George Palmer’s on ‘Cowslip Corner’ in 1947 as evidenced in The Royston Crow (above).