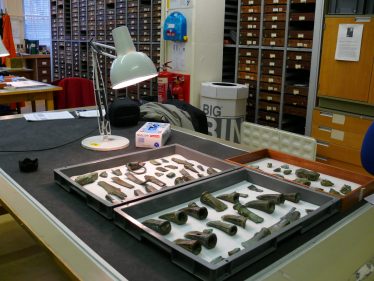 zoom
Some axe heads. The nearest one still has the remains of its wooden shaft attached.
Photo by Robert Skeen courtesy of Bristish Museum 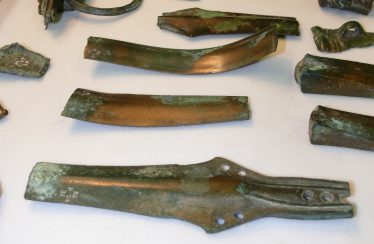 zoom
In addition to swords and axes, the hoard includes a cauldron handle, a spearhead and some more general tools, including a woodworking gouge
Photo by Robert Skeen courtesy of the British Museum 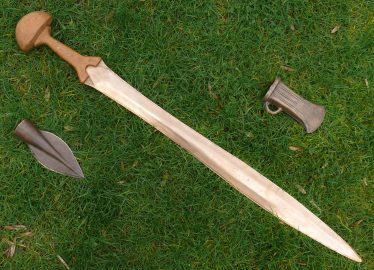 The Meldreth Hoard gives an important and fascinating glimpse of our ancient past. It consists of a large collection of bronze weapons and tools that date from the late Bronze Age (1,000 BC to 701 BC). Most are broken or fragmented. The Hoard was probably deliberately hidden and lay undiscovered until it was found near Meldreth station by a “working man” in November 1880. It was presented to the British Museum by A W Franks and now resides in the British Museum research outstation in Shoreditch.

Many bronze age hoards have been found across Europe but there is a significant concentration in the East Anglian region. The Meldreth Hoard consists of over 60 individual items and, while not the largest, is certainly an important example.

Bronze age hoards are thought to be either:

Whether it is a founder’s hoard or an offering, the Meldreth Hoard is evidence of the very high quality of workmanship displayed in weapons and implements produced some 3,000 years ago. It also gives an indication of the relative wealth of at least some parts of the society of the time.

Some examples from the Hoard

The axe was the ‘Swiss Army knife’ of the bronze age and served as both weapon and tool. The hoard includes many axe heads ranging from the older solid types (known as ‘palstaves’) through to the later and more efficient “socketed” axes.  There is even a design known as the ‘Meldreth axe’ named from an example in the hoard.

Swords were high prestige items and evolved from rapier like weapons to broader leaf bladed designs. Later examples include swords which have their handles cast as part of the blade. All of the swords in the hoard have been deliberately broken.

Tools and Utensils.  The hoard includes one of the handles from a bronze cauldron – these are quite rare.  It also includes some tools for working wood including a skilfully made gouge that would not be out of place in a modern carpenters toolbox.  There are also pieces of slag and ingots of bronze ready to be cast into new objects.