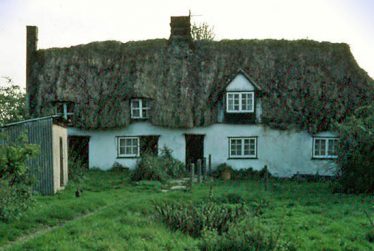 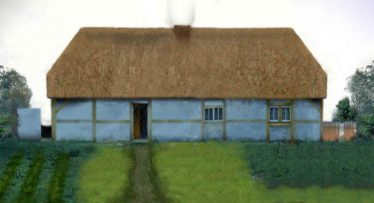 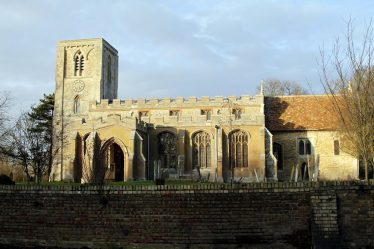 The inspiration for these pages began with this photograph of a now gone cottage in Chiswick End (pictured right) shown during a Meldreth Local History Group Coffee Morning. An image such as this gives us further insight into the history of our village buildings and supplement the exploration of the materials our forebears used in the Building Materials pages on this website.

We hope that these pages on the evolution and layout of buildings will enable you, when walking around the village, to spot intriguing features which give an insight into how the buildings evolved, and the families within them.

We would be delighted to hear from anyone who has old floor plans or photographs of their property, or accounts of how the building has changed over time. Please email us if you have any information you would be willing to share.

First impressions of Chiswick End Cottage are of a tumbledown labourer’s cottage. Its thatched roof is disintegrating and the garden is overgrown. Home to one or more lower working-class families, and for decades without the modern conveniences of running water and electricity, it represents a building approaching the end of its useful life.

Look again and what you now see is a post-Medieval three-bay hall house whose design template descends directly from the Medieval open hall house, itself a direct descendant of the pre-Conquest Anglo Saxon long hall.

Probably purpose built for the use of a higher status land worker – a yeoman – it had lasted some two hundred years before being photographed, though there is much evidence of alterations and adaptations made by the generations of people living there.

Today, Meldreth contains a good number of old buildings. Including the Church, the Stocks and the stone cross base, forty-one locations are listed as being of historical interest. The majority of the listed buildings are what we describe as half-timbered and represent the archetypal sought-after country cottage.

In terms of age, none appear to be older than 16th century so although often romantically described as Medieval they are in historical terms, modern. Early modern, but still modern. For reference the Medieval period, or Middle Ages, is considered to have begun in 500AD following the collapse of the Roman Empire and ended somewhere between Columbus setting sail for the New World in 1452 and the Protestant Reformation in 1517.

Of the listed buildings in Meldreth only significant parts of the Church and the stone cross base are obviously Medieval in origin.

Not one single listed building in the village retains its original form. Just as today we add extensions and remove internal walls, so did our ancestors adapt and modify their homes as prevailing attitudes towards convenience and comfort changed; often in parallel with technological advancement, building material availability, social mobility, and last but not least, individual spending power.

The Modern Era: Black Death and the Great Rebuilding