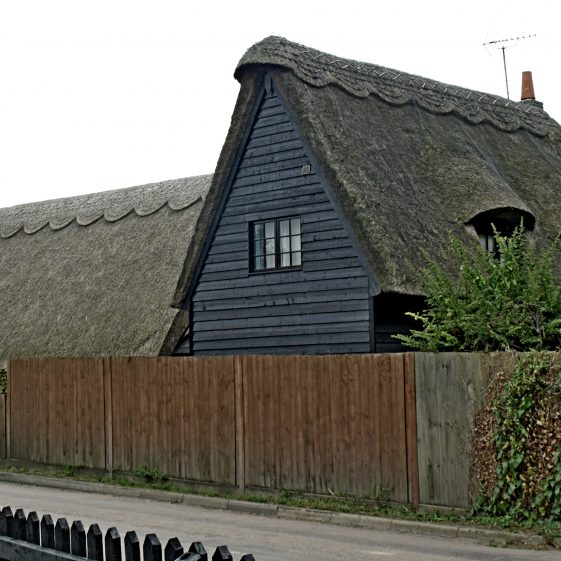 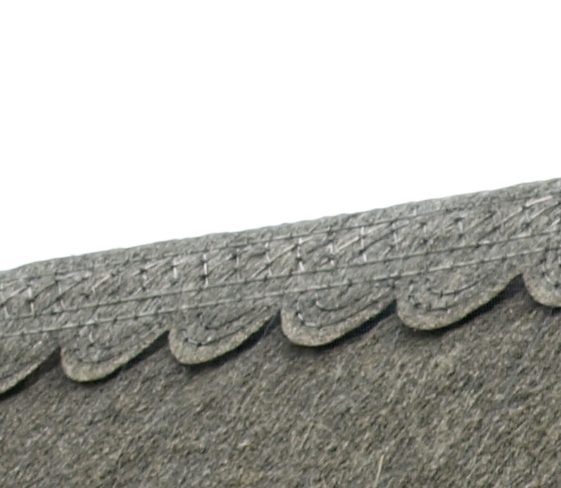 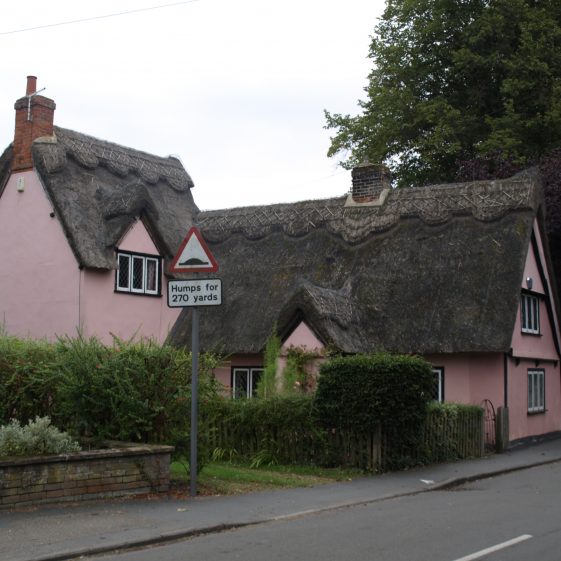 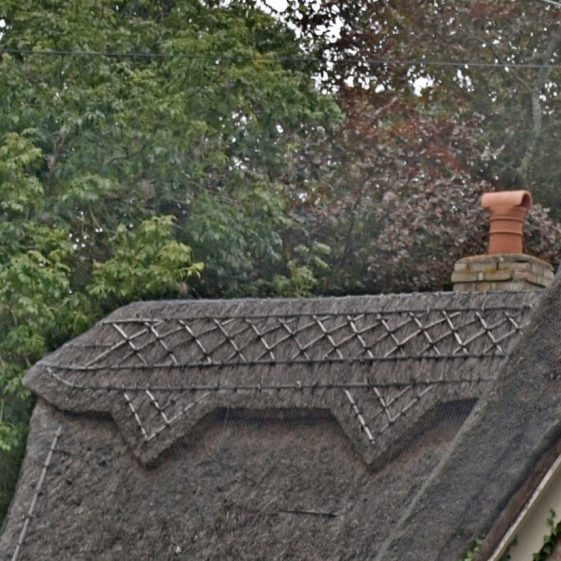 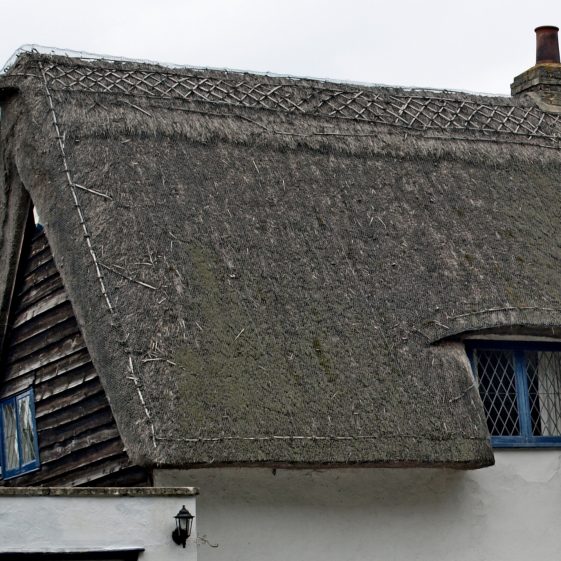 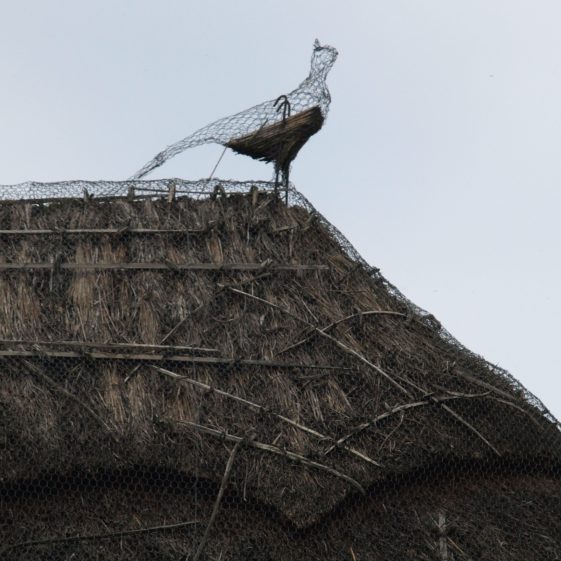 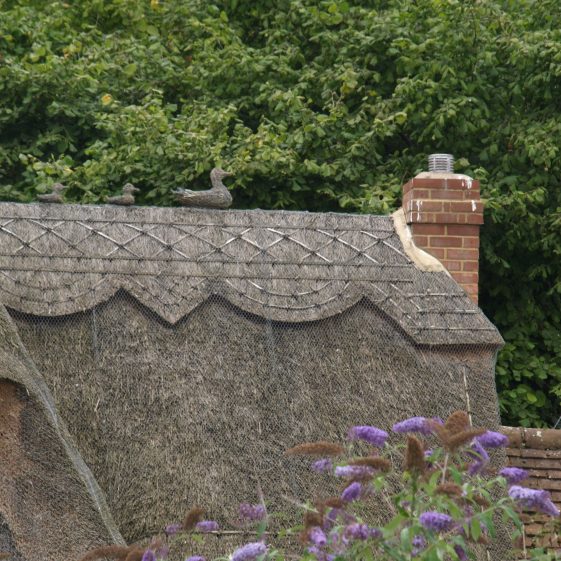 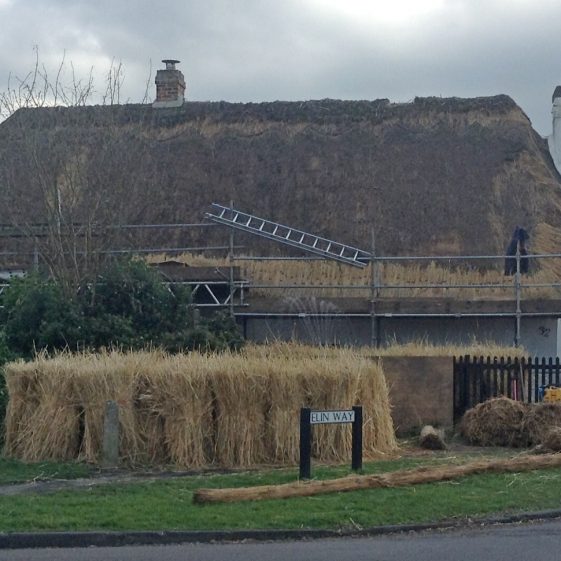 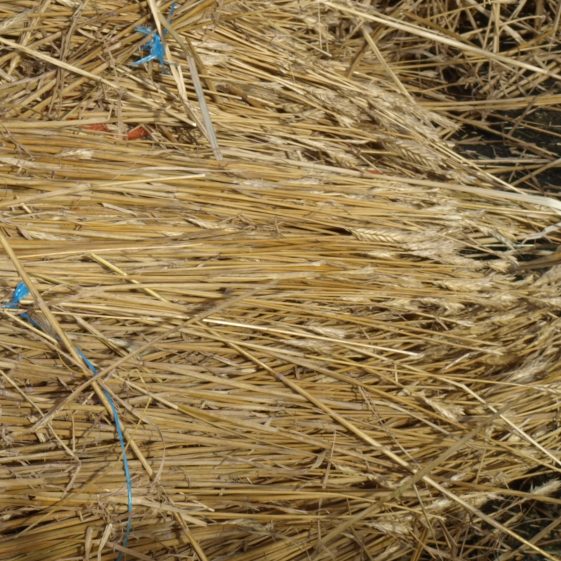 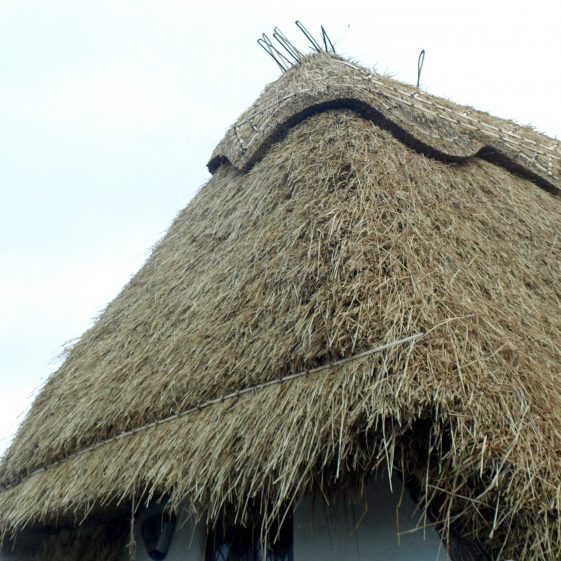 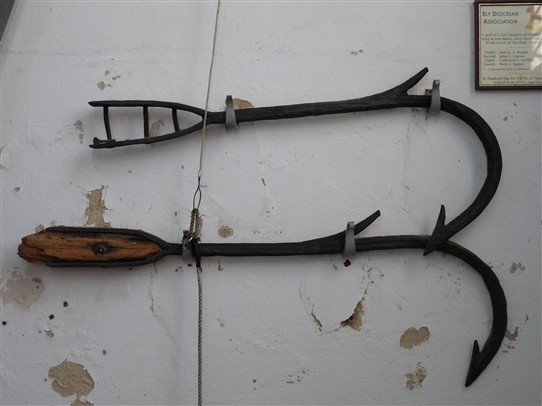 The earliest roofing material in the UK was likely to have been a form of thatch. The word thatch comes from an Old English word thaec meaning roof-covering indicating that it was already common in Anglo Saxon Britain. Topcliffe Manor House, Meldreth is recorded as being thatched in 1380. This practice has continued to the present day and many thatched buildings remain in Meldreth. Of the 31 listed dwellings in the village, sixteen were thatched at the time of listing with an additional one (Chiswick Farmhouse) noted as “originally thatched”.

After a major fire in 1212, thatched roofs were banned in London and Worcester’s ordinances of 1467 showed concern for the dangers of fire as thatched houses were not allowed within the walls.

Slate began to replace thatch in the early nineteenth century as Welsh slate became available via the railways and in the twentieth century new types of wheat, producing less appropriate straw, began to be cultivated with the introduction of the combine harvester, reducing the availability of straw for thatching. In the south (including East Anglia) thatched buildings declined from 573,544 in 1860 to just 23,144 in 1960 (95.9%). However thatched buildings became popular again in the latter part of the twentieth century.

New thatched houses were discouraged from the late nineteenth century when building standards began to be introduced. However it was allowed again from 1918 when there was shortage of other materials following the war. There are three thatched buildings in Meldreth that are not listed, possibly because they were built or thatched relatively recently: Walnut Cottage at 9 Whitecroft Road, 98 North End and Fordham’s Cottage 34 Chiswick End.

There are a number of pictures on the site showing thatched buildings which have now been demolished or the roofs replaced with other materials.

All the listed thatched buildings in Meldreth, where the material is mentioned at listing, have been thatched with longstraw not reed.

Longstraw or combed wheat reed is a little thicker, is shaggier and has a smoother outline than reed. Heads and tails are mixed together and the bundles are called yealms and can last for up to 100 years. The under thatch, usually reed can last for centuries.  To control the quality of the Long Straw used the thatchers’ grow, harvest and thrash their own wheat crop. The wheat grown is an old, tall variety, grown without the input of additional fertilisers to ensure strong stalks. Under favourable growing conditions the wheat can grow to about 5 – 6 foot tall.  There is a farmer in Whittlesford who still produces straw for thatching.  Rush or sedge are often used for ridges as the material is more pliable, but does not last as long; a maximum of 50 years.

The main thatch material used in other parts of East Anglia is Norfolk Reed (or water reed) which is also harvested in Suffolk. It is collected after winter frosts have killed off the leaves and cut, dried and stacked into bundles. It can last for 70 years.  Reed has a compact even texture with clean cut edges. The heads of the reeds are laid in the same direction.

Methods of thatching have changed little as can been seen from old pictures. It is a highly skilled craft beginning at the eaves and working up.  Craftsmen indicate their individual styles in the ridge patterns, linked to hazel battens (brotches) under the thatch and now a thatch sculpture e.g. of a pheasant is often added on the ridge.

Thatch is the only roof you can really use with cob or clay bat as these walls cannot support the weight of tiles.

The pitch on a thatched roof is usually steeper than on other kinds of roof to allow rain or snow to fall away more rapidly.

Generally the steeper the pitch of roof the older the cottage. East Anglian reed roofs are particularly steep with a sharper line than in other parts of the country due to the nature of the reed material. The thatching style was simpler without blocked ridges. However there is now some concern that traditional regional styles may be lost over time as processes become more standardised. It will be interesting to document the change in Meldreth styles over the coming years.  For instance many houses now have blocked ridges.

At 47 High Street (which was the Post Office) the C17th ceiling, wall frame and roof were intact at the time of listing.

Sarah Butler mentions thatched cottages in her memoirs: “All were thatched with straw, also local. Most of the village men could do a bit of patching up when it was necessary, which was quite often as sparrows played such havoc, the thatch being a favourite nesting place”.

There was a well known family of thatchers in Melbourn: the Stanfords.

Advantages and Disadvantages of Thatch

Thatch is a good insulator as air is trapped between the layers so the building is warm in winter and cool in summer. However the material is very flammable.

There have been several serious fires in Meldreth, some linked to thatched cottages.

Inside the church tower are two thatching hooks (pictured in the gallery above). An entry in the Constable’s account for 1723 records the purchase of two fire-hooks from Thomas Barber, Smith. The church provided a central location in which to keep these large hooks for ripping off thatch when cottages caught fire.

The Re-thatching of a Melbourn Cottage

Please see the download below for a record of the rethatching of a Melbourn cottage in 2015.

More information on thatching and its materials are available at: