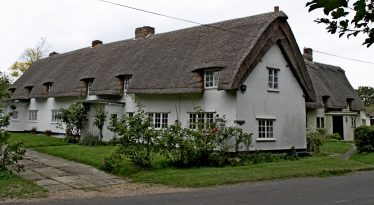 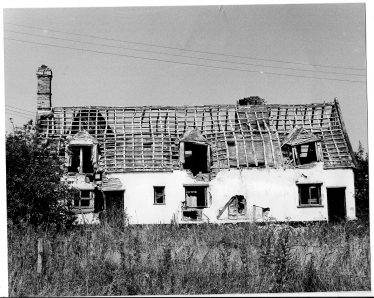 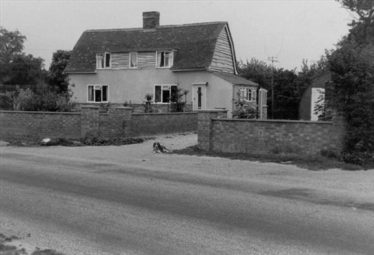 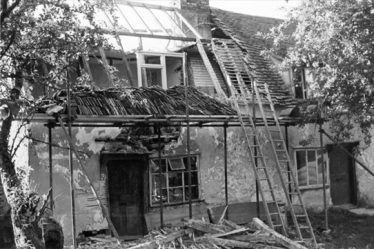 There is evidence of human inhabitation in Meldreth from Neolithic times (for example flint arrow heads have been found on local field walks) and as the settlers became more sedentary, they would gradually have developed buildings to live in.

The evidence from Mesolithic (e.g. Star Carr near York) and Neolithic (e.g. Must Farm in Cambridgeshire) archaeological sites indicate that prehistoric dwellings were mainly timber construction (from the existence of post holes and at Must Farm the burnt timbers were preserved in the river mud). The exact design of roof or walls is mainly speculative.

However, evidence from other parts of the world indicate that natural materials were often used, including wood and mud (wattle and daub) and plants (thatch). Both wattle and daub and thatch are still used in Meldreth buildings today.

Later, the Romans brought more sophisticated approaches to building. A few shards of Roman building materials were found on a field walk near Chiswick End in 2015. This walk was on a field adjacent to the Bury Lane solar panel site where investigations (Archaeological Project Services report 122/13 and a later report published in July 2014) revealed a substantial Roman settlement.

Housing styles developed over the ages and the materials used were influenced by natural materials available locally. The picture of 23 North End (above right) shows many of the features of older buildings exposed.  This can be compared with the photographs of the building during and after renovation. Later, styles and materials used changed with developing technologies and also as transportation allowed items to be brought from further afield.

Apart from Holy Trinity Church (the oldest parts of the present building date from the 12th century) the three oldest remaining buildings in Meldreth (according to the listed building records) are 16th century: 33 North End – formerly the Green Man, Chiswick House and Sheene Manor. There are 22 seventeenth century dwellings listed out of the total of 33 grade two listed dwellings. Willow Way Cottage at 9-11 North End (pictured right) is one of these and was originally a typical row of thatched cottages. It is now a single dwelling.

There was an English tradition, without any legal basis, that if an English person (male or female) could build a house on common land between sunrise and sunset on one day including a roof and a fire in the hearth, then they would have the right of undisturbed possession. This was sometimes called “keyhole tenure”. and lasted until the early 20th century.  However it was such a problem that an Act known as the Erection of Cottages Act 1588  as introduced.  The Act prohibited the construction of of any dwelling that did not have at least 4 acres (which had to be kept manured) assigned to it out of the freehold or other heritable land belonging to the person responsible for its construction.  The fine for an offence was high at £ 10 (about £ 3,800 in current value using the Bank of England inflation calculator).

Exemption from the Act could be obtained by petition on grounds of poverty, provided the permission of the manorial lord was given. Lodgers and the subdivision of houses were not allowed.  A further Act in 1601 (An Act for the relief of the poor) gave churchwardens and overseers authority to build cottages on ‘waste and common’ for the use of the poor, with permission of the manorial lord.

Wattle and daub and thatch were probably the main building materials used in dwellings as the hamlets which later constituted the village began to form. In the late medieval period these early dwellings would have developed into more substantial wooden framed buildings, of which there are several examples still remaining in the village. Thirty-one of the 33 listed dwellings are described as timber-framed and many of these would have also used wattle and daub as the infill material between the timber beams. Daub was found in several archaeological test pits dug in the village in 2013, including those related to manorial sites.

Thatch was an easily available local material for roofing as there was a good supply of wheat straw or reeds. Sixteen of the listed buildings are thatched and one is described as having been previously thatched.

Stone would not have been readily available for the majority of the population in Meldreth until the modern period and even then does not appear to have been used in village dwellings. The main stone available in East Anglia is a limestone. There was medieval (and possibly Roman) quarrying at Barnack near Peterborough which produced a stone which is present in Meldreth church (although it was later repaired with another type of stone).

Slates would also not have been available in the early history of the village although there is a type of East Anglian limestone which splits in frosty weather, forming thin layers that can be used as roofing slates. However, this particular form of slate has not been documented in Meldreth. Eight of the listed dwellings are described as having slate roofs (three just on an extension).

Tiles were also a later roofing material. Eleven of the listed dwellings are described as having tiled roofs.

Clay is available in Cambridgeshire (Gault or Oxford clay) and there are some examples of the use of clay bat (an unfired clay block) in Meldreth buildings. There were extensive brickworks in the county and the more substantial buildings e.g. The Court at 118/120 High Street are made of brick. The Laurels at 72 North End is recorded as using Gault bricks.

Another naturally occurring building material is chalk (clunch) and there is some examples of use of clunch in Meldreth dwellings.

The Romans also used a form of cement, hydraulic lime mortar, which in this neighbourhood may have used the local chalk.

Evidence of Building Trades in Meldreth

The census returns from 1841 to 1911 give an indication of the different building trades carried out by inhabitants of the village. Meldreth had, of course, a much lower population during these years with just 700-800 residents recorded at each nineteenth-century census. By 1901 this had dropped to 626 and by 1911, to below 600.

By far the most prevalent trade was that of carpenter, with ten carpenters listed in the 1841 census, dropping to just four in 1910 and none in 1911. Rarely more than one bricklayer, plasterer, glazier or thatcher is mentioned in any one census. These building tradesmen were generally born locally, in and around Cambridgeshire, but those working on the railway were born further away and only appear in the 1851 census so presumably were employed by the railway and arrived and moved on as the railway construction progressed.

For a full analysis of Meldreth residents who were employed in building-related trades between 1841 and 1911 please see our downloadable pdf file.

In some families, the son continued with the trade, e.g. Plumb and Hale.