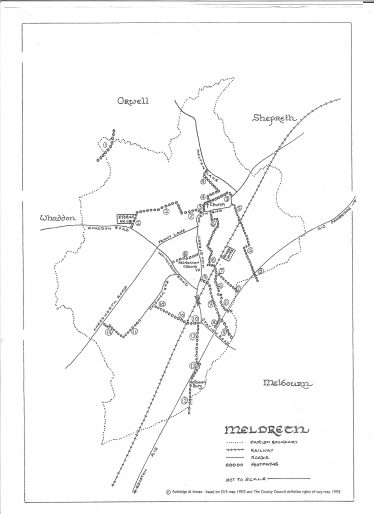 Meldreth has approximately ten miles of public footpaths.  These are maintained by volunteers, working under the direction of the Parish Council’s Parish Paths Partnership.

The route of each footpath is described below and may be viewed by clicking on the image on the right.

Start at Whaddon parish boundary (accessed from path starting at the industrial barns by Methodist Church, Whaddon) over arable fields, through a wood to King’s Bridge over the river at the Orwell Parish Boundary.  The path continues across the former Malton golf course.

From Whaddon Road, take the path between Etex’s (Marley Eternit) car park and the Sports and Social Club. Turn right, cross fields following line of telegraph poles. After third bridge, keep ditch on left, field on right. At end of field turn right onto farm track. Turn left through gap in hedge at remains of gate/stile. You will come to a meadow where hedge on right finishes.  Following hedge on left, pass through old, narrow gateway. Emerge behind old smithy to exit at North End.

Commence at gate and stile to left of churchyard in North End, proceed along grass track, bear right along post and rail fence and young hedge to footbridge and stile. Keep hedge on right, continue in direction of wooden boundary fence of The Warren. Proceed between garden and meadow boundaries, bear right onto tarmac roadway exiting onto North End.

The path commences beyond footbridge and stile on Footpath 3; proceed diagonally across meadow to left of trees. Continue behind The Warren to stile in corner of field. Bear left, keeping post and wire fence on right. At end of field, turn left, then right over footbridge and stile. Cross pasture to stile opposite then through field, part rough and part planted with vines.  Passing through gap in hedge, exit onto Malton Lane.

Begin at entrance to College Farm Business Centre, North End. Bear right along tarmac road with Belmington Close on right, arable land on left.  Continue along farm track, cross railway line, gated on both sides. Follow grass track through arable fields, known as “Overdown”, over stile, cross A10 to another stile, across field to footbridge which marks the parish boundary. If you continue across field and turn right onto grassy track you will exit at The Moor, Melbourn.

Start at North End opposite church and go through brick entrance to Topcliffe Mill. Follow gravel drive, bear left at gateway to house. On reaching watermill, turn left, cross stile or go through kissing gate. Follow perimeter of field, cross stile or go through kissing gate. Keep river on right through mainly wooded area. Path continues through Melwood (a designated local nature reserve) and then goes behind Flambards Close and crosses railway line with stiles. An alternative route passes under the railway line, known as Pile Bridge. Continue with river on right under A10 and beyond parish boundary where path exits onto Melbourn Village College playing field.

From near Pile Bridge (see Footpath 6), cross field to open ditch bridged by sleepers (parish boundary). Follow path across field to stile, over A10 to stile on other side of road leading to arable land and exit at The Moor, Melbourn.

Known as Polly’s Acre along recreation ground, path starts at junction of Whitecroft Road and Howard Road at old metal squeeze gate. Continue between fences and hedges before reaching the recreation ground and exiting along narrow passage between houses on High Street.

Begin at kissing gate at bottom of station footpath between “Hunter’s Moon” and Allerton Terrace in the High Street. Cross railway bridge and field beyond, called The Meads. Path continues under A10 and ends at junction of slip road and Station Road.

Starts at Station Road, Meldreth at side of A10 bridge and runs parallel to A10 joining Footpath 9 by farm barns.

Take wide track, right of farmhouse next to Fieldgate Nurseries in Station Road. Cross railway line and stiles. Take grass path between fields from telegraph pole. On reaching hedge (keep hedge on right), and at corner of field go through gap (five-bar gate on your right) and exit into Chiswick End.

Footpath, Bury Lane, begins immediately right of Fieldgate Nurseries and continues as grass lane. Cross A10, continue between post and rail fences then along gravel path which joins tarmac road exiting onto old A10 in Melbourn near Melbourn Bury. The parish boundary lies a few yards from the old A10.

Starts by turning right at end of Footpath 11, follow line of hedge to end of path, exiting at Mettle Hill/Kneesworth Road.

A short path from Flambards across the River Mel to join Footpath 6.

Please note that this is a rough guide only and that in places rural footpaths can be unsuitable for pushchairs, etc.