Highways and Byways of Meldreth: the Medieval Period 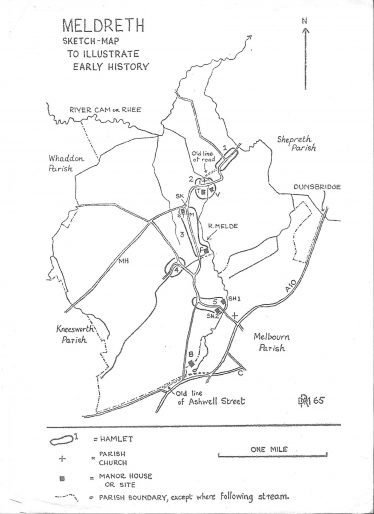 zoom
Map of Meldreth
from The Early History of Meldreth by D R Mills, 1965

This page on routes through and around Meldreth follows a first page which describes the ancient trackways around the village. The earliest detailed records of thoroughfares associated with the village are the Topcliffe manorial court rolls and the information on this page is based on the references to various types of thoroughfares that are mentioned in these documents.

The Topcliffe manorial court rolls are held by London Metropolitan Archives (LMA) and date from 1316 to 1746. In addition to the original rolls in Latin, the LMA hold a translation of the rolls by the St Thomas’s Hospital archivist, E M McInnes. These are in the process of being transcribed for Meldreth Local History Group by Arnold Stanford. The information on this particular page has been taken from the court rolls dating from 1316 to 1516. These give a rich picture of the village during this interesting period. They include a wide variety of references to thoroughfares, with a range of terms being used: road, strete (street), lane, path, drive, track, way/wey, footway and highway. Close is also recorded but during this period refers to a piece of land, e.g. Topclyffes Closse.

Interestingly, there are more references to watercourses and mills in the manorial records than to roads. In fact many of the references to thoroughfares are as a result of them having been flooded and fines are levied for the lack of maintenance of the adjacent watercourses or for mill ponds being too high rather than for the lack of maintenance of the roads themselves.

The land of the highway, to the centre of the road, was owned by the adjacent landowner (a similar principle applies to riparian owners and watercourses) so they would have had responsibility for its maintenance. From 1285 landowners had to maintain the “King’s Highway” when it was on their land. In 1555 a new law required Parish Councils to maintain the roads in their parish.

The maintenance of smaller paths on common land was probably left to the villagers and fines may not have been incurred for failure of maintenance, which would explain why these are rarely mentioned in the court records.

Unfortunately, the earliest detailed map we have of Meldreth is the Enclosure Map of 1820 so it has been difficult to identify the exact location of many of the named thoroughfares. In addition, the manor of Topcliffe had land in other villages so some of the names refer to thoroughfares which were outside the boundaries of the present-day village, for instance Ashwell Street which is in Melbourn.

There are a number of different spellings for some of the thoroughfares. This was not unusual at the time and could also be due to a mis-reading of the original Latin text during translation or to errors during transcription.

The street names mentioned in the court rolls that I can link to modern roads are:

Balleslane / Ballislane / Bals lane) which relates to what has become Malton Lane. One reference from 1317 states that someone made a gutter in it “to the hurt of the village”.

Asshewelstrete / Ashewellstrete / Asshewell Strete / Alwelstrete / Ashwelstrete which I identify with Ashwell street. This was an ancient route which became a Roman road from Ashwell with a link to the Icknield Way passing through the northern tip of Melbourn where Topcliffe Manor also had land;

Fenellane which is possibly Fenny Lane. However there is also reference to Veyseis/Veysie’s Lane linked to Veyseis Closse (Close). Veysie’s was recorded in the 1950s as being the old name for Fenny Lane. There maybe a link to Vesey’s Manor;

Methewehill / Meclowhill is very likely to be Mettle Hill. In other sources the name has also been quoted as Motlowhill and Metlow Hill which adds to the likelihood that it derives from the Anglo Saxon ‘moot hlaw’ – a meeting or assembly point on a mound or small hill. This may have been the moot or meeting place for the Armingford Hundred;

Le Northende towards Tyrellys / Northeend / Le Northendestrete. This probably refers to North End and the Tyrellys reference may be to Tyrell Manor land in Shepreth. Dobbies garden centre in Shepreth is on land that was called Tyrells. However, in the sixteenth century the manors of Tyrells and Flambards were linked with land in Malton, Meldreth and Shepreth so this may have been referring to another of their land holdings or manors. There is a reference to it leading to Colyswayour, which we haven’t been able to identify;

Southstrete / (Le) SouthEndstrete / Southendestrete / Southeendstreat. This is described as a lane and is possibly the South end of the High Street. There is also a reference to Southende Crosse;

Topklenyslane / Topklefyslane refers to the lane from North End to Topcliffe Mill which is still in existence (as a private drive) and now links to the footpath along the Mel.

Brodstrete / Le Brodestrete / Broodstrete / Bodstrete was probably a significant thoroughfare as it is it is described as a highway but also, significantly, on occasions as the King’s Highway. It is possible that it is that section of North End that runs to the south of the church now. This would link to two references that describe it as near Chirchmyll/ Churchemylne (sic). We think this mill may have been near the church.

Street Names Unable to be Linked to Present Day Roads

The street names which we have so far been unable to link to modern roads are:

Cherrhye Lane this may be at the entrance to Whaddon where the road crosses Whaddon Moor Drain. Cherry Close is identified at this location at enclosure.

Grenelowepath next to mellefeld. There was a Greenlow farm and now Greenlow Kennels in Melbourn near the Meldreth boundary but it is not clear if this is linked.

Le Moor possibly the Moor in Melbourn or L Moor between Meldreth and Shepreth.

Mellelane/Millane presumably a lane leading to one of the watermills

Portewey possibly Portway in Melbourn. It is described as a road. The name Portway often relates to a route to a town or port and this may have been a cartway to Cambridge;

Redwey there is a reference in the court rolls for 1513 to the need to clean “Le Broke of Redwey as far as Le High Rey”. The High Rey maybe the upper reaches of the River Rhee.

Whitcroft (various spellings) mentioned as a field  but maybe related to Whitecroft Road.

Wodeway, Woodwey Possibly Wood Way. A Wood Way in Melbourn ran from the western edge of the village south from Ashwell Street to the Icknield Way

The King’s highway is mentioned a few times in addition to the links to Broad street. One says it is “towards Cantebr“ probably referring to Cantabrigia (Cambridge). Other locations linked to it, unfortunately not identified, are Colardis and Belamyys.

The term highway is used, often because it has been flooded. It is also used to identify land adjacent to it. It is possibly what came to be the High Street.

For information on the terms used for different types of thoroughfares and their derivation, please see the attached document.

Bridges were also important and had to be maintained.  For instance in 1434 Thomas Dischalers was fined and ordered to repair Holmesbrygge. In 1455, John Chalers was fined for failing to maintain the same bridge (which also appears in the records as Holmebrigge/ Holmbrige). A few years later in 1461, John Dyschalerys (possibly the same person), was also fined for not maintaining this bridge. Presumably this was an important bridge, possibly crossed by one of the main thoroughfares, as it is the one most mentioned. It may have been at Sheene Mill as the bridge there (replacing a ford) was called Holm bridge. It was replaced by the current iron bridge in 1852.  Alternatively it may have been the bridge now called King’s Bridge on Malton Farm (formerly Malton Golf Course). Please see our separate page on Fords and Bridges.

Other bridges I have identified are: Mylredhome brygge (this could be another name for Holmebrigge), Malton bridge, Cherrhye Brege, Gentynes Bridg (sic), Boybregge (near Whaddon; referred to as late as 1942 by Beatrice Clay), Lacheforthebregge, Nuttes Bridge and Fennell Laines Bridge. Cherrhye Bridge may be at the entrance to Whaddon where the road crosses Whaddon Moor Drain. Cherry Close is identified at this location at enclosure.