New Chapter in the Life of Meldreth's Wesleyan Chapel 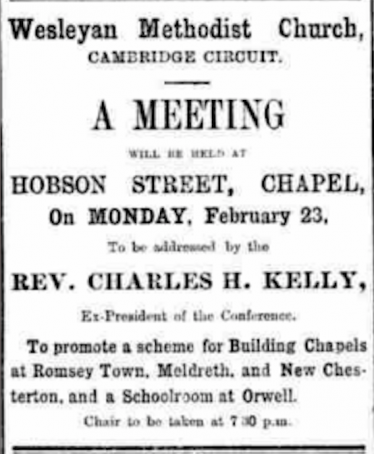 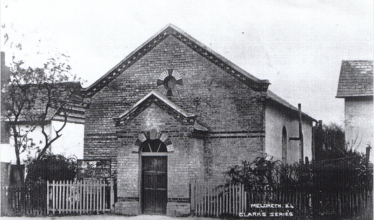 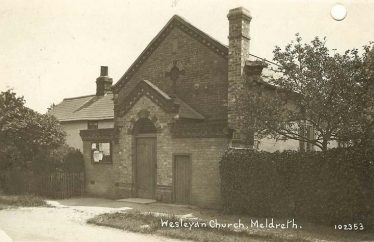 zoom
Wesleyan Chapel, North End, Meldreth after the 1906 renovation work, as it would probably have looked in 1939
Bell's postcard, 1920s, supplied by Ann Handscombe 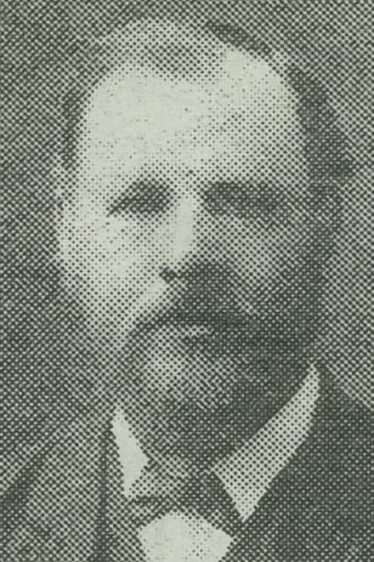 zoom
Charles Kerridge, 1847/8 to 1927, bricklayer and partner in the Kerridge and Shaw building company, Cambridge who renovated the Wesleyan Chapel in 1906
www.millroadcemetery.org.uk 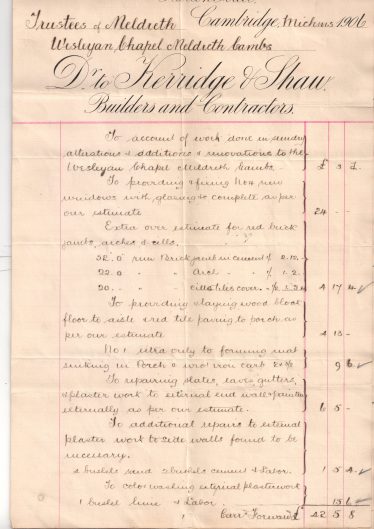 zoom
Extract from Kerridge and Shaw's invoice for the renovation work, 1906
Maurice Prové

zoom
Rodney 'Gypsy' Smith, 1860-1947, a famous evangelical preacher who visited Meldreth on the occasion of the Wesleyan Chapel's re-opening in 1906
www.revival-library.org

On 19th February 1903, the Cambridge Evening News announced a meeting of the Wesley Methodist Church, Cambridge Circuit to be held at the Hobson Street Chapel, Cambridge on Monday 23rd February “to promote a scheme for building chapels at Romsey Town, Meldreth, New Chesterton and a Schoolroom at Orwell.” The meeting was to be addressed by Rev. Charles H. Kelly, ex-President of the Methodist Conference.

A report of the meeting appeared in the same newspaper shortly afterwards. “On Monday evening the Wesleyan Methodists of the Cambridge Circuit commenced in earnest a new extension scheme … fully propounded at a largely attended meeting held at Hobson Street Chapel under the presidency of Rev. W. Bradfield who is the superintendent minister of the Circuit.” During the meeting he gave a very downbeat assessment of the condition of Meldreth’s existing Wesleyan Chapel:

“With regard to the chapel at “Meldreth, the seats were as uncomfortable as any he had experienced for many years and the building did not worthily represent what Methodism was in that village. The people in the place were very ready to help in the building of a new one. At Orwell they had filled the chapel every night during the last week … (applause).” But the Orwell chapel had no schoolroom and needed one if it were to continue to thrive. The “proposed buildings at Meldreth and Orwell would each cost about £500 … It was proposed to contribute £200 more from the scheme (announced at the meeting) to the Meldreth project; donations would bring in a further £100 and another £100 would probably be raised at the foundation stone-laying and opening.” Mr. Bradfield next drew attention to “promise forms” which had been left in the pews for people attending the meeting to complete. He wanted it to be understood that any promise made was not for a single donation but for a subscription for three years. He urged that they should all pull together and “if they did so he knew it would be for God’s glory and the great advantage of the Cambridge circuit (applause).”

We are told that the Rev. Kelly (of London) “delivered an eloquent and racy address, in the course of which he said the proposed scheme was a very great one, but they were meeting a great necessity of the time … He contended that it was the religion of England that had made her what she is today, and said they must therefore extend that religion … It was necessary that everybody should be interested in it, and that everybody should give something: if not money then labour or prayer (hear, hear).” Various promises were made of financial support to the scheme, amounting to £903, shortly after which the meeting closed.

The renovation work was carried out in 1906 by Kerridge and Shaw, Builders and Contractors of Sturton Street, Cambridge. An extract from the invoice for their work is shown here and a transcript of the full document is attached (see below). Charles Kerridge was a Suffolk bricklayer who originally worked for builder James Footer of Exning. He married one of his employer’s daughters and in 1880 set up business in Cambridge with carpenter George Shaw who had married another of James Footer’s daughters. Kerridge and Shaw began in a small way from their premises on Sturton Street, off Mill Road but their reliability became known and the business prospered. They built many landmark buildings in Cambridge including St Andrew’s Street Baptist Church, the adjoining fire station and the medical school in Downing Street – also the Colchester Town Hall and the Grand Hotel, Southwold.  The Kerridge family grave is in the Mill Road Cemetery. (Note: one of Charles Kerridge’s five sons was Kelsey Charles Kerridge who went on to become a Cambridge Alderman and after whom the Kelsey Kerridge Sports Centre is named).

The renovation of the Wesleyan Chapel was not entirely straightforward. The walls were found to be damp, the plasterwork in poor condition and, “by reason of irregularities”, boarding the ceiling required additional work. New pews to replace the uncomfortable ones were “carted” from Orwell. An entry on the Orwell Past and Present local history website tells us that the old pews and rostrum from their chapel were sold to Meldreth for 23 shillings. Once all the work had been finished the Cambridge Independent Press was able to report, on 10th August 1906, that the Chapel had begun the next chapter in its history:

“Yesterday meetings were held at Meldreth in connection with the re-opening of the Wesleyan Chapel which has just been thoroughly renovated. This scheme is another instance of the activity of local Wesleyans, who during this year have built a new chapel at Orwell and laid the foundation of another at Romsey Town. The chapel at Meldreth was built 70 or 80 years ago at a time when non-conformists had to be content with somewhat humble meeting houses [note: this suggested construction date is not accurate – 1850 is the correct date]. The building had fallen into disrepair, the pews were of the high-backed, old-fashioned kind with little doors, the windows afforded but little protection against cold winds, and the heating apparatus was inefficient. The chapel has now been thoroughly cleaned and a great many improvements effected. A new rostrum has been erected and the chapel re-seated. The building is now lighted by handsome tinted glass windows, the porch has been re-built and a new heating apparatus installed [a new chimney replacing the old external heating pipe is clearly visible in the later photograph]. The ceiling has been match-boarded, and the walls, both inside and out, have been newly-faced. In the porch a tile floor has been substituted for the old one of plain brick. The cost of the work is £130 (the invoice was for £171) and towards this, £52 has been raised by means of collecting cards. The builders are Messrs. Kerridge and Shaw, of Cambridge.

The re-opening services were well attended. In the afternoon, the Rev. William Bradfield, the superintendent minister, preached to a large congregation. Tea was served on the lawn at ‘The Laurels’, the residence of Mrs. Bowman, who has taken a great deal of interest in the scheme (she is listed as a farmer and landowner in the Kelly’s Directory, 1900). In the evening a public meeting was held, when those taking part included Gypsy Smith (a famous evangelical preacher invited by General William Booth to join him in his work for the Salvation Army),  Rev W. Bradfield, Mr. C. Kerridge, Mr. Talbot Peel, Mr. Peters (Orwell), Mr. J .H. Thomas (Wimpole) and others.”

An entry in the London Gazette, 25th February 1913 confirmed that the Wesleyan Methodist Chapel in Meldreth was, on 19th February of that year, registered for solemnising marriages by authorisation of Arthur Sharpe, Superintendent Registrar.

I would like to thank Maurice Prové for his help in researching the chapel and for giving me access to documents he has in his possession.

Transcription of the invoice for the renovation of Meldreth Wesleyan Chapel, 1906 (82 KB Adobe Acrobat document, opens in a new window)
Maurice Prové