You are here: HomenextNew contributionsnextPonies and Galloways - Going to the Races

Ponies and Galloways - Going to the Races 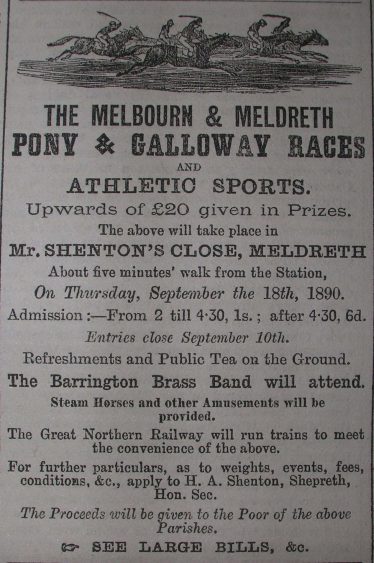 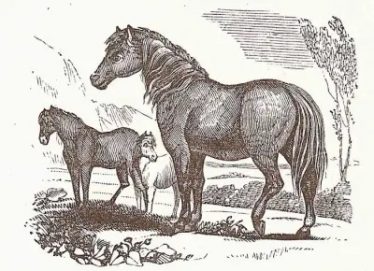 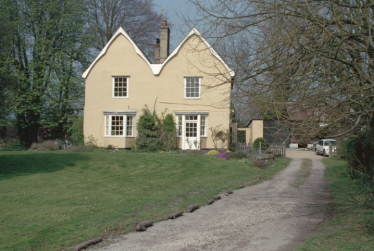 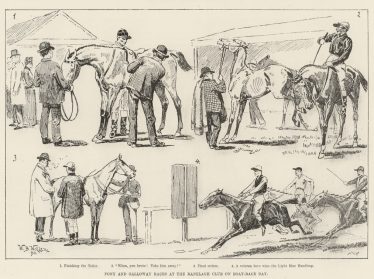 In Cambridgeshire, the town of Newmarket is synonymous with horse racing but back in the early 1890s, Meldreth and Melbourn held their own distinctive race meetings – sometimes with a little controversy. The Cambridge Independent Press  of Saturday 20th September, 1890 carried a report of the ‘Meldreth and Melbourn Pony and Galloway Races and Athletic Sports’, held on the previous Thursday afternoon. (Note: the Galloway Pony is an extinct horse breed, once native to Scotland and northern England. It was said to have good looks, a wide, deep chest and a tendency to go at pace rather than trot. Though small in size they were exceptionally hardy and very good to ride. In the 18th century Galloways were bred in Swaledale to haul lead ore; there is even a reference in Shakespeare to “Galloway nags” (Henry IV, Part 2). They died out through cross-breeding as farmers found they needed horses of greater weight and better adapted to pulling carts and machinery. The name Galloway is sometimes given to horses of an intermediate size between a pony and a full-sized horse, whatever their breed. It may be that the term was used in this way in describing the Meldreth and Melbourn races. Pony and Galloway races took place in other parts of the country and one of the illustrations here shows an event which took place at the now defunct Ranelagh Club in West London on Boat Race day).

‘A large number of people assembled in Mr Shenton’s close at Meldreth (situated close to the Stocks) to witness the Pony and Galloway Races and Athletic Sports, which took place with enormous success, under the guidance of the following gentlemen, to whom a word of praise is due: Stewards, Messrs. C. Flanders, R. Flitton, E. Nelson, J. Porter, Dr. Reynolds, H. Coningsby (horse racing) and A. Jarman – the link here may be to the same local man whose untimely death was recorded in 1895 – (athletics); starters, Messrs. G. Chamberlain (horse racing) and P. Rumble (athletics); clerk of the course, Mr. W. Wedd; clerk of the scales, Mr. J. Disbrey; timekeeper, Mr. J.C.L. Shenton. Tea and other refreshments were provided upon the grounds at low prices and during the afternoon and evening a programme of music was nicely rendered by the Barrington Brass Band. Appended is the List of Prize Winners:

MELDRETH STAKES – for ponies and Galloways; 14 hands 11st 7lbs, 7lbs allowed per inch under; distance one mile; prizes, 1st £2, 2nd £1- five ran. 1st Mr. H.Pauley’s Snail, ridden by the owner; 2nd Mr. W. Brown’s Miss Winifred, ridden by H. Randall. Won by six lengths. The course was run over once too many, the time, therefore, was not taken. An objection was raised because Snail, who had previously won a race, did not carry the 7lbs penalty in the second. It was eventually decided that the prize money should be equally divided between the first and second.

CONSOLATION RACE – 15 hands 12st, 7lbs allowed per inch under; distance one mile, prize £1.The only entry was Mr. Nelson’s Honesty. The race was therefore declared void. A handicap match was then arranged between Mr. Nelson’s Honesty (11st), ridden by its owner and Mr. Cornwall’s Sinner (12st) ridden by Nightingale, which resulted in a win for the former by one length. Time, 2mins 14secs.’

But competition was not only of the equestrian kind – a number of athletic events were also held. A 100 yards Open Handicap took place with a staggered start for the runners, presumably based on their known speed over the distance. The final was won by R. Brown, with A. Giles second and a tie for third place between A. Abrey and J. Bodkin. R. Brown also won the Half Mile Open Handicap. The Mile Open Handicap was won by L. Guiver and a Half Mile Handicap, confined to runners from Meldreth, Melbourn and Shepreth only, by J. Huggins.

The following year the annual Melbourn and Meldreth Races were held in mid-May. The same newspaper of 23rd May 1891 recounted that:

‘The stewards of this very popular little race meeting may heartily congratulate themselves on the success attending their fourth annual races on Monday last. The weather experienced during the preceding few days had been anything but flattering and, indeed, until noon on Monday there was a continuous downfall of sleet and rain. Then the rain ceased and although the sun did not deign to shine and the atmospherical conditions were anything but pleasant, quite a large concourse of people drew together and the greatest interest was manifested in the various races. The card comprised seven events, being divided into one hurdle and six flat races…’ The course, described as ‘about three laps to the mile’, had moved from the previous year to ‘the grounds of the Lord of the Manor (Mr. Hitch) and from the manner in which it had been laid out the numerous spectators were able to get a fairly good view of the races. During the afternoon a brass band greatly enlivened the proceedings with a good programme of music, and the usual amusements attending a race meeting, such as the shooting galleries, throwing at coconuts etc. came in for a good share of patronage.’ (Note: the grounds referred to here are almost certainly those of Lordship Manor House on High Street, Melbourn. Dating from the fourteenth century and built on a moated site, the house was sold in 1703 to a Mr Richard Hitch and seems to have remained in the Hitch family at least until the early 1890s).

We are told that the Covent Garden Stakes over a mile and a half was the ‘most important race of the day and the greatest interest was taken in it. Trumpington and Bill were the most fancied. After three attempts, the lot were sent off to a capital start and Trumpington was at once sent to the front. In coming up the straight in the first lap, he was leading by about four lengths and, continuing to make the pace very warm, he increased his lead….(and) won in the easiest possible manner by between thirty and forty lengths.’

When it came to the Members’ Cup for horses from within a radius of seven miles, the ‘favouritism was shared by Rare Bits and Mimi’ and ‘when the bell rang for the last lap, Rare Bits, who was being ridden in splendid style, went to the front and won easily, Little Jim being second and Mimi third. Vivandier, a long way behind, was last but a question arose as to whether the the full course had been gone and the rider of Vivandier, acting on instructions, went round again by himself and claimed the cup as the only horse that had completed the distance. The stewards took the matter into consideration and eventually awarded the race to Vivandier, ruling that none of the others completed the course and therefore disqualifying them. This caused a good deal of dissatisfaction.’

There are no reports of any athletic events having taken place at this 1891 meeting.

The following year the event returned to Meldreth and the Herts and Cambs Reporter of Friday, June 10th 1892 carried an account of the racing which took place on a warm sunny Whit Monday with a prize fund of £50 at stake. ‘Special facilities were given by the G.N.R. Company, some of whose through trains from London to Royston and Cambridge were stopped at Meldreth for the occasion … The races took place in the same field which was used two years ago, viz. Mr Shenton’s field with an entrance near the Old Parish Stocks. The fine weather brought a large number of visitors who were out for a day’s pleasure, besides those who were present from the more exclusive interest in the running of the horses themselves … With a larger attendance than at any previous meeting …. the running was smoother and more free from accidents than on former occasions.’

But again proceedings did not go entirely to plan. In the Covent Garden Stakes with seven runners, we are told that ‘Blossom led in the first part but was eventually overtaken by Polecat, The Demon and Rice Pudding coming up next in order, and after a good race Polecat won by a length and a half. Directly the numbers had been posted up and while the bookmakers were paying out their money, two of the competitors, Blossom and Rice Pudding (who had beaten Bovril in an earlier race), went another lap, their riders being of the opinion that the full course had not been run. The disputed point formed the subject of consideration by the stewards but the judge’s decision as posted up was upheld … The Shepreth Brass Band played a selection of music during the afternoon and evening and there were swing boats and an aerial trapeze.’