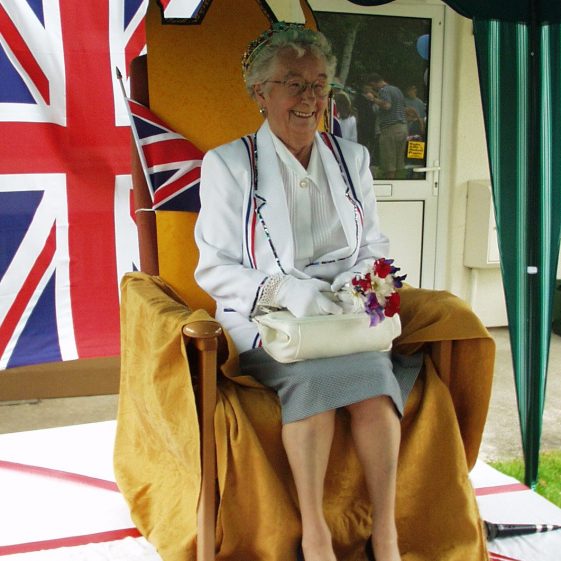 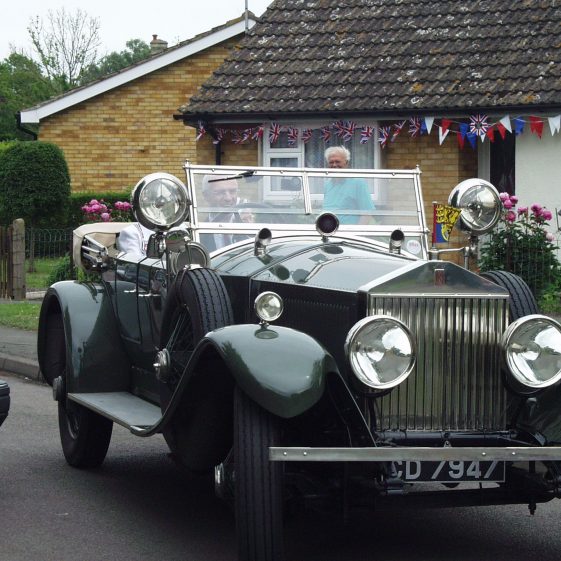 The arrival of 'Her Majesty' in a 1927 open top Phantom 1 Rolls Royce, driven by Christopher van Essen
Tim Gane 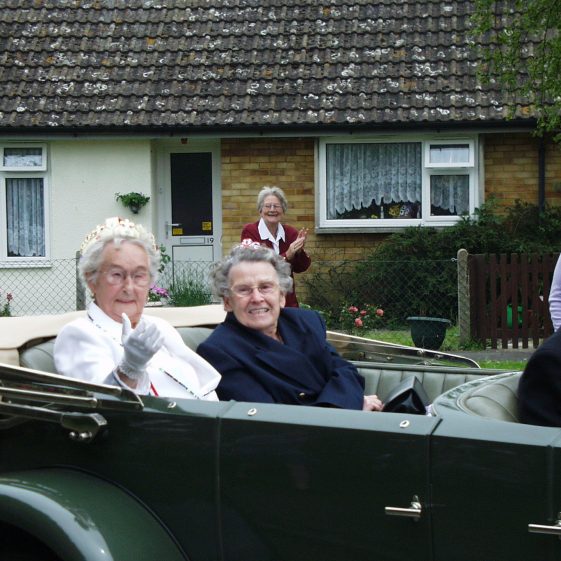 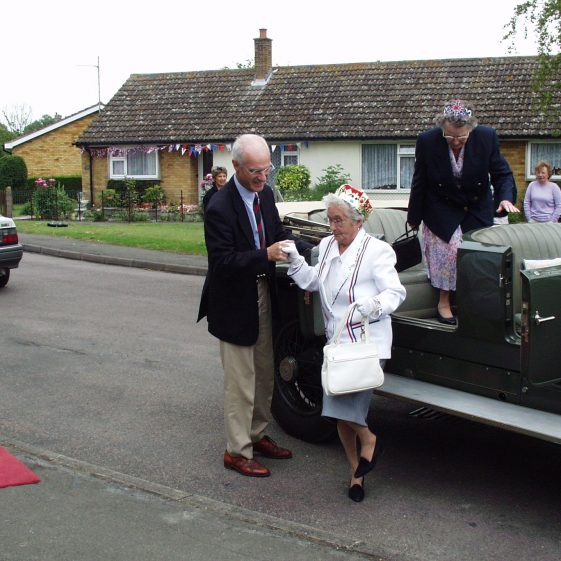 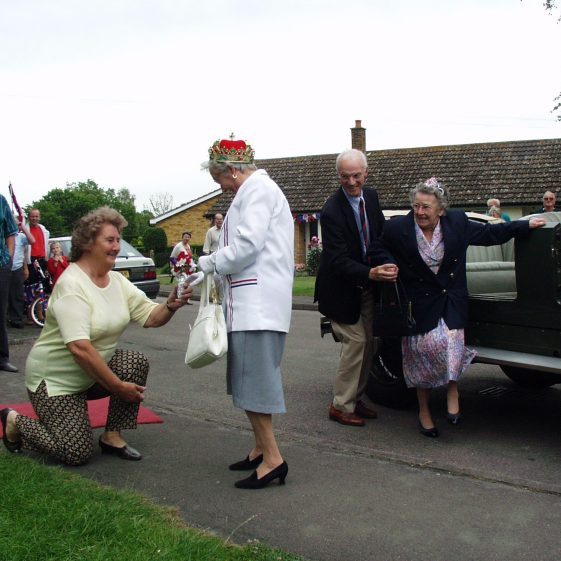 Flowers presented to 'Her Majesty' by Hazel Waldock
Joan Gane 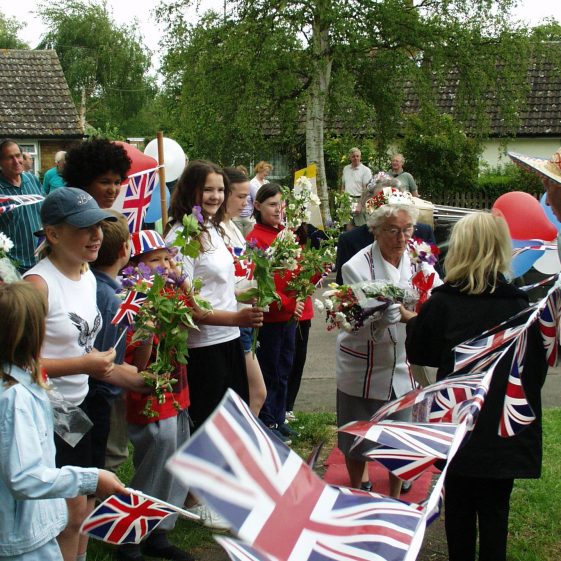 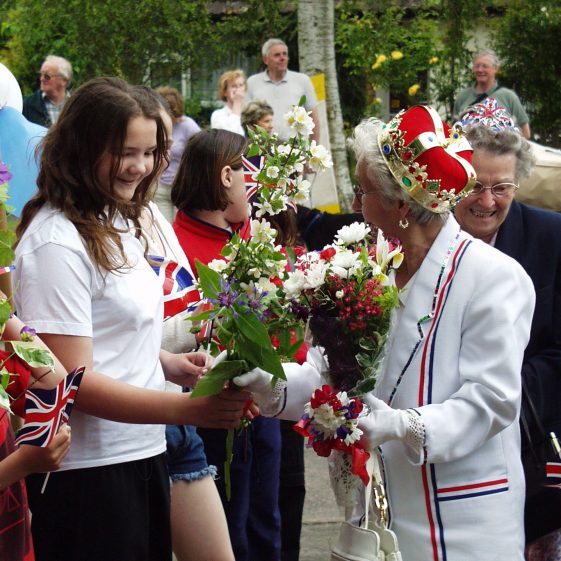 Gifts of more flowers for 'Her Majesty'
Joan Gane 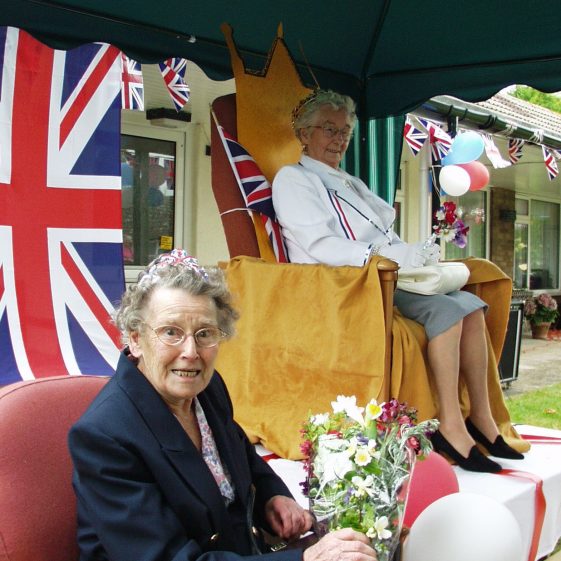 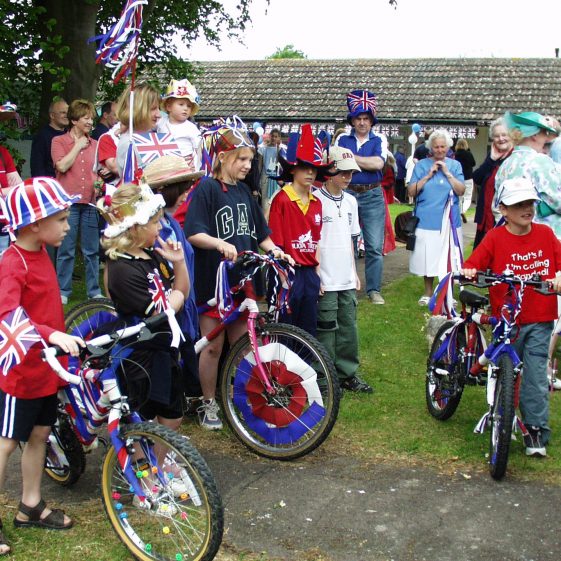 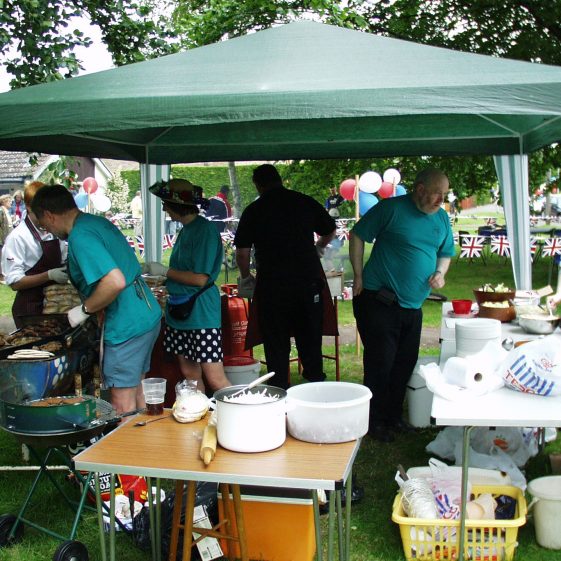 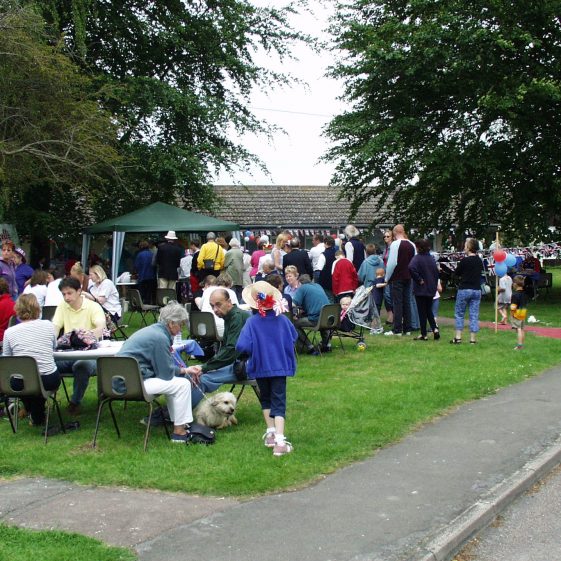 The Jubilee site on The Green in Elin Way
Joan Gane 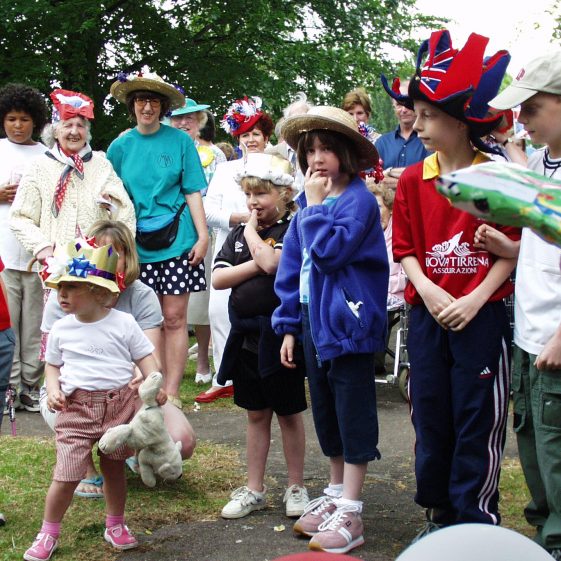 Some of the Meldreth loyal Subjects
Tim Gane 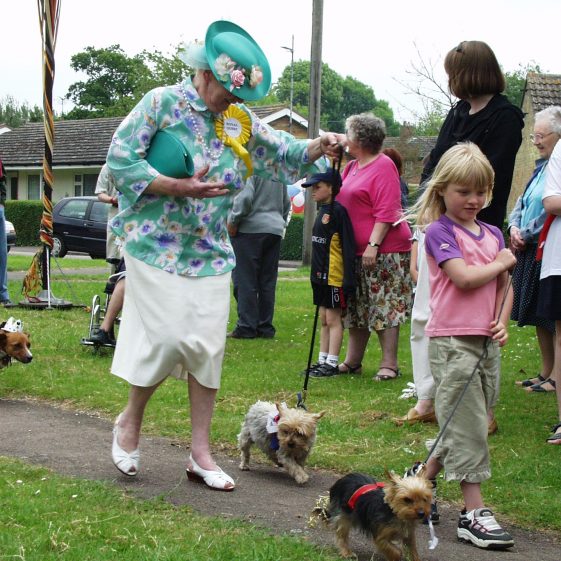 Members of the MVA had only just recovered from organising all the events of the millennium year. However, they were keen to show support for the Queen’s Golden Jubilee and so met up on 23rd April 2002 to make the arrangements.

The MVA members included Ken Singleton, Barbara Gowling, Avril Mac Arthur, Margaret Hunter, Carol and Peter Mathews and Joan and Tim Gane. The event had been suggested by Lisa, the Manager of the Sheltered Housing complex, who suggested that the street party came to the elderly residents rather than them having to go to another venue. The MVA agreed and arranged for the celebrations to be centred on Elin Way.

The committee agreed that Meldreth should have its own Queen for the day and a member suggested a friend who resembled the Queen and would be perfect. Sadly, after accepting the role, the lady ‘abdicated’ two days before the event as she did not want to wear a hat!  I had to quickly search for a new Queen with a dog . I found Lily Sumsion and  her dog from Whitecroft Road. We also found her a lady in waiting, Doreen Stern,  and an open topped Phantom 1 Rolls Royce, courtesy of Christopher Van Essen.

The provisional plan was discussed with Meldreth Parish Council at their May meeting on 2nd May 2002 and they offered to cover any incidental costs. It was agreed that there was no need to close Elin Way; there would be enough room on the green for the event. The event was advertised in Meldreth Matters.

Russell Davey, our local butcher,  set up a barbecue on the green in Elin Way. Tim Gane, Peter Mathews and Barbara Gowling assisted Russell. The ice creams for the day were provided by GoCold , a local Meldreth business at the time. An amusing ‘hitch’ was that the mobile freezer was plugged into a resident’s electricity supply. Unfortunately he did not tell us that he was on a metred supply. The £3 we gave him did not cover the electricity costs and so it ran out! The ice creams turned out more like Mr Whippy’s!

Ken Singleton set up a small target bowls area for people to try the game. A bouncy castle was set up on the recreation ground and a football tournament was run there by Tony Charter.  The Village Hall was also open for teas during the day and a disco was held in there in the evening.

The village maypole was brought to Elin Way from the school.  Joan and Tim Gane had recently trained some of the Meldreth school pupils in maypole dancing so they gave a demonstration. The adults joined in later, reliving childhood memories!

After everything was set up and before Lily Sumsion, our Queen arrived, Meldreth residents arrived to line Elin Way and cheer. ‘The Queen’ drew up in the car waving to all her subjects and she was helped from the car by Christopher van Essen before receiving a bouquet of flowers from one of her ‘subjects’. Everyone cheered, bowed and curtsied.

Lily walked with her dog up to her throne along a red carpet, with her lady in waiting  beside her. The throne was on a plinth and had been decorated accordingly. The residents certainly made her feel welcome.

The competitions were judged by ‘Her Majesty’ and certificates issued.

It was a great day and everyone enjoyed it. There was something for everyone. Our oldest resident attending was age 102 and our youngest was in a pram. All of the Jubilee outfits were wonderful with red, white and blue at every turn of the head. Luckily the weather held out and everyone went home having had a lovely community day. It embraced a true feeling of Britishness and a show of love and respect for our real Queen Elizabeth II.