You are here: HomenextNew contributionsnextThe Last Will and Testament of Mary Palmer

The Last Will and Testament of Mary Palmer 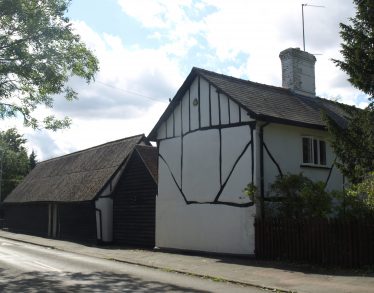 zoom
Temple House, High Street which was inherited by Mary Palmer in 1788.
Photograph by Bruce Huett

The Palmer family had a long association with Meldreth, stretching over several centuries. Mary or Mollie Palmer was born in 1755 and died in 1827. She inherited Blacks, otherwise known as Temple House, in Meldreth’s High Street from her father George in 1788.

Note
Whilst every attempt has been made to transcribe the will accurately, MLHG accepts no responsibility for any errors. A copy of the original will may be downloaded from the National Archives site, ref. PROB-11-1727-266.

This is a Codicil to be annexed to and taken as part pf the Will and Testament
of one Mary Palmer of Meldreth in the County of Cambridge, spinster, bearing date
the seventh day of May one thousand eight hundred and seventeen. First I direct that
the legacy of ten pounds by my said will bequeathed to Mrs Sarah Morris since deceased
shall sink into my personal estate for the benefit of my residuary legatee; also I
revoke the legacy of one hundred pounds by my said will bequeathed to or charged
in favour of Mr Joseph Pattisson Wedd my Executor; also I direct that the clothes
and wearing apparel by my said will bequeathed shall be divided among the several
legatees to whom the same are given by my said will, by and at the discretion of
my friend Miss Hester Nash of Royston, whose division as to the same shall be binding
on my said legatees. Also I revoke the devise in my said will contained of my
estates at Barkway and Little Wilbraham to my friend Mr William Nash and in
lieu thereof I give and devise all my messuages, land, tenements and hereditaments
whether freehold or copyhold, or of what tenure soever which are situate, lying or
being in Great Wilbraham and Little Wilbraham in the County of Cambridge, and in
Barkway in the County of Hertford or in any or either of the said parishes to
William Hollick Nash of Royston and his heirs and assigns to the intent that he
and they may be admitted customary tenants of the copyhold parts of the said
premises and may stand and be possessed of all the said premises in trust for
Master Nash aforesaid, Elizabeth Nash, Mary Wedd, Sarah Fordham and Martha Nash
the five daughters of the said William Nash as tenants in common for their respective
lives with remainder as to the one fifth share limited to each of them for her life,
as aforesaid in trust for the said Mary Wedd and Sarah Fordham for their respective
lives as tenants in common, with remainder as to the moiety of each of them in trust
for all her children as tenants in common, their heirs and assigns for ever, and
revoke the appointment of the said William Nash to be an executor of my said will,
and I appoint the said Joseph Pattisson Wedd sole Executor thereof, and in all other
respects I ratify and confirm my said will, in witness whereof I have hereunto set
my hand and seal this fifteenth day of September in the year of our Lord one
thousand eight hundred and twenty four. Mary Palmer. Signed, sealed, published
and declared by the said Mary Palmer as and for a codicil to her last Will and
in the presence of us who at her request in her presence and in the presence of each
that have hereunto set our names as witnesses, Chas. Stokes, Thos. Pickering, J.H Edwards.

This is a further codicil to be annexed to and taken as part of the last will
and testament of me Mary palmer, of Meldreth, in the County of Cambridge, spinster.
I give to Mrs Bygrave of Malton for her kind assistance to me the sum of twenty five
pounds of lawful money and a handsome suit of mourning. And I leave all my
freehold and copyhold estates in my will devised to my cousin George Palmer and his heirs with
the payment of my debts, funeral and testamentary expenses, and my legacies not
charged on other real estates in aid of my personal estate, and in all other
respects I ratify and confirm my said will and codicil heretofore made by me
thereto in witness whereof I have hereunto set my hand and seal this twenty sixth
day of March in the year of our Lord One Thousand Eight Hundred and Twenty
Seven. Mary Palmer Signed sealed, published, and declared by the said Mary
Palmer as and for a further codicil to her last will and testament in the presence of
us who at her request in her presence, and in the presence of each other, have hereunto
set our names as witnesses the interlineation above the seventh line
from the top being first made. Sophia Crook, Benjamin Howard Junior, Emma Bullen,
Meldreth, Cambs.
Proved at London with two codicils the 19th June 1827, before the worshipful
Jesse Addams, Doctor of Laws and Surrogate, by the oath of Joseph Pattisson Wedd the
sole Executor named in the first codicil to whom administration was granted having
been first sworn duly to administer.