The Renovation of the Meldreth Funeral Bier 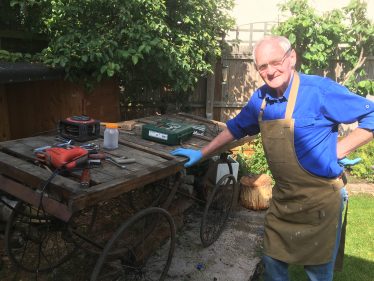 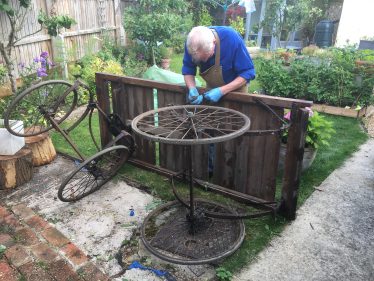 zoom
The dismantling of the bier is underway. Fortunately the brass screws were easy to remove.
Tim Gane 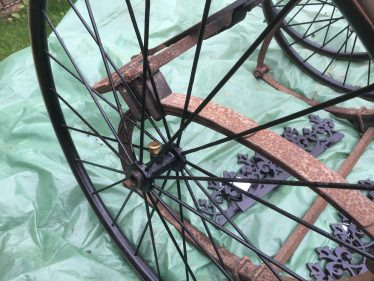 zoom
By August 25th 2021 John had cleaned and painted the wheels and side castings. Each casting was labelled to ensure it was returned to its correct position. The brass grease caps cleaned up as new.
Tim Gane 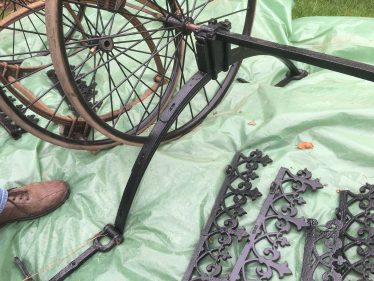 zoom
The rear wheels and springs had been painted and the side castings are as good as new.
Tim Gane 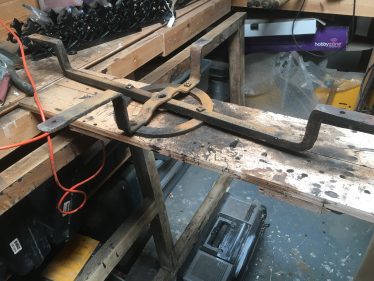 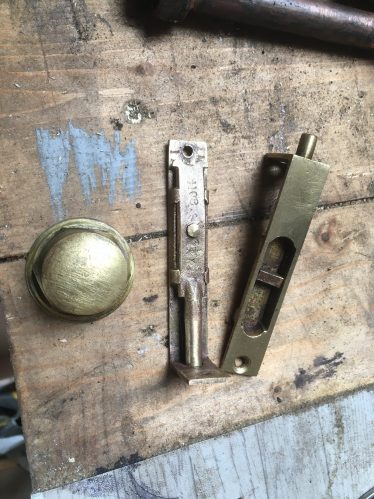 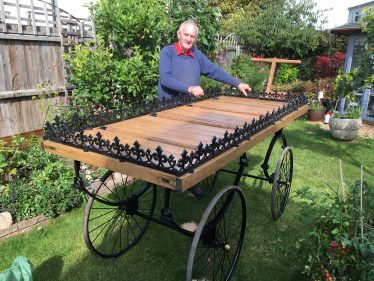 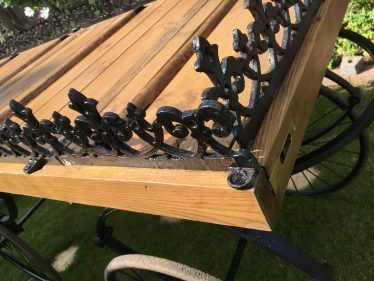 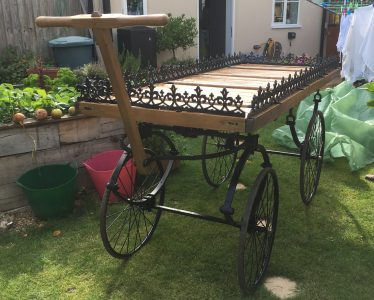 zoom
The restored bier with the new pull bar and handle.
Tim Gane 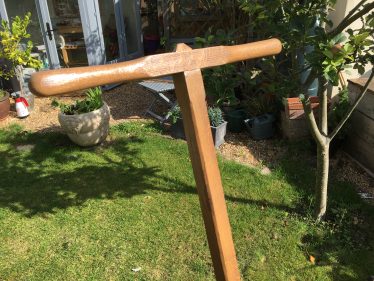 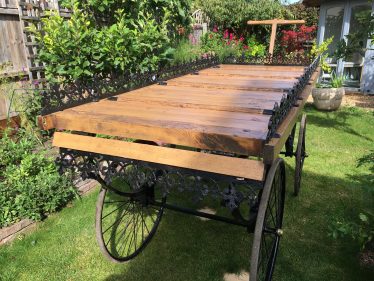 zoom
The hinged, drop-down tail board to assist with the loading and unloading of the coffin.
Tim Gane

It was back in January 2009 that Meldreth Local History Group first became aware of the funeral bier, made in 1921/22 by Herbert Gipson. It had been transferred from its purpose-built shed in  Fenny Lane Cemetery and put into Raymond Course’s barn at Northfield House. No-one could tell us when this had occurred but it had been quite some time judging by the amount of dust and general detritus that had accumulated on it over the years!

The bier was dragged out, photographed and then discussions began as to what to do with it.  Raymond was clearing his barn and so it had to move from there, but no-one wanted it, especially in its present state. At that time there was little interest for it to go into the Church especially given its condition. Articles were published in Meldreth Matters asking if anyone was interested in undertaking its restoration. A Funeral Directors in Royston said they would fund it, but only on the condition that they could display it in their window. This was discounted as the general consensus was that it should remain in the village. The BBC TV show ‘The Repair Shop’ was even approached but it was not something they were interested in.

In the meantime, the bier was moved to various sheds and barns around the village until John Morgan, a retiree from Yorkshire, who moved to Meldreth in 2014, offered to restore it. John had spent the previous twenty years restoring sash windows and was the ideal person to restore our funeral bier.

Meldreth Local History Group contacted Meldreth Parish Council, the owner of the bier, to obtain the necessary permission for restoration work to begin. The Parish Council contributed half of the cost of the materials required, with the remaining fifty percent coming from the funds of the disbanded Meldreth Village Association. John Morgan and John Richards very kindly donated their time to the project so there were no labour costs.

Work started in August 2021, the bier’s 100th year, with John Morgan stripping the bier down to its basic components. There had been some deterioration in the twelve years since its initial ‘discovery’ and there was considerable woodworm damage in the bier’s wooden bed. Fortunately, the main oak frame was perfect. The pulling shaft attaching to the steering mechanism was fine, but the handle was rotten and eaten by woodworm. John Richards, a skilled wood turner in the village, turned down a new handle to an exact copy of the original.

The bier bed was rebuilt with fresh timber which was treated with three coats of Sadolin Medium Oak wood stain followed by two coats of Danish Oil. The wooden coffin rollers were cleaned up and treated similarly before greasing and reassembling.

The cast metal bed sides were all in good order, requiring only cleaning and painting. Even after 100 years the nuts, bolts and screws could be easily removed and in the main, could be reused.  The remaining metal parts though were very rusty and required sanding, rust treatment, priming and finally painting with black Hammerite undercoat and a top coat of metal paint.

John Morgan found that the bier had been built from standard parts, readily available at the time and nothing had been specially fabricated. The brass bolts and grease caps cleaned up as good as new.

During reassembly the grease points were filled with molybdenum grease and all moving parts greased or oiled as appropriate.

John Morgan finished the assembly in September 2021 and the finished bier looked as good as the day it was first made 100 years ago, as can be seen from the accompanying photographs.

The question now is where the bier can be kept. The ideal location is Meldreth’s Holy Trinity Church but there is still very little interest in this.