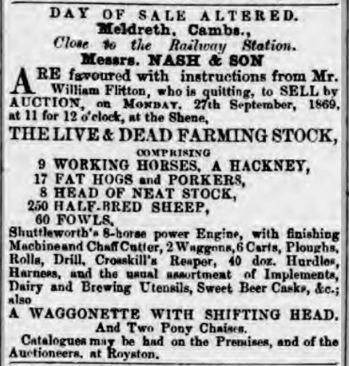 My great grandfather Ralph Henry Flitton was born in Meldreth in 1846.  He had three brothers and two sisters who were all born in the village between 1842 and 1857.   Their father, William, was born in 1819 at Little Barford House which, I presume, is at or near Hail Weston, which has also been listed as his birthplace.  He either inherited or purchased land near Meldreth and by the time of Ralph’s birth, was a successful farmer.   At some point in the mid 1800s he acquired the Sheene Mill and in 1861, his two sons were listed as being millers in the census.

In 1852 John Casbon, a 10-year-old boy was sentenced to seven years’ transportation after setting light to a haulm stack that belonged to William Flitton. William was one of a number of Meldreth residents who signed a letter the following year requesting leniency in the case.  For the full story of the case see “The Old Cow Got Round It”.

According to a newspaper clipping (right), William put the mill up for sale in 1869 along with all his “live and dead stock” and retired to Bedford.  However, three years later, his son Ralph moved to Melbourn with his new bride Letitia and took up ownership of a water and steam mill (possibly Sheene Mill).  They lived in a house opposite the vicarage described by Letitia as “our pretty little old fashioned reed-thatched home which stood on 5 acres consisting of lawn, shrubbery, lovely apple orchard & vegetable garden with good out houses, stable, etc”.  Here they had two sons, the second of whom, Arthur Guy, only lived for three months and is buried in the Melbourn cemetery.

In 1882, the family moved to Meldreth to live in “the Cottage” where their third son and my grandfather, Ralph Cyril Flitton was born.  At some point in the ten years they lived here, some sort of financial misfortune befell Ralph Henry and the family lost everything they owned.  In the 1891 census his occupation is listed as “fruit grocer”.  On May 13, 1893, Ralph, Letitia, Geoffrey and Cyril emigrated to Vancouver, BC.   It seems to have been an extraordinary decision – to travel to the farthest coast of Canada where they knew no one and start out all over again.  Especially considering that Ralph was nearly 50 years of age!

Family letters and photos show that Letitia stayed in contact with her parents, Charles and Sarah Deane of Bedford (who probably provided financial assistance for the trip to Canada).  She also received some correspondence from unidentified friends living in Meldreth until at least 1910.  There is no evidence of any contact with Ralph’s father, brothers or sisters after he left for Canada.

I would be grateful if anyone can provide more background to this story – especially the ownership or operation of Sheene Mill in the 1800s.