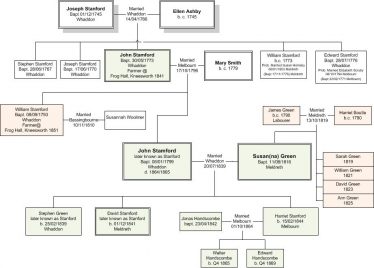 The censuses of 1841, 1851 and 1861 suggest that our branch of the family originated from Frog Hall (173 Bridge Street), Dyers Green, Whaddon and worked as smallholder farmers, very likely renting land from Biscoe Hill Wortham; land which had previously been owned by the Nightingale family and which bordered on the Earl of Hardwicke’s estate at Whaddon. According to the Whaddon Village Design Statement, Frog Hall is a listed thatched cottage dating to the late 16th or early 17th century with a timber frame and rendered walls. It is a single storey cottage with attic floor and still has its original bread oven. In 1897 it formed an item in a sale of the Kneesworth Estate.

During the 18th and 19th centuries there is only a small number of births named Stamford recorded at Whaddon church. There is fairly strong evidence that William Stamford (1793) and John Stamford (1799) shared the same parents (John Stamford and Mary Smith) and that John Stamford was the son of Joseph Stamford and Ellen Ashby of Whaddon. William married Susannah Woolmer and apparently continued to farm at Frog Hall until after his parents died. Sarah Fortune, a niece born at Fowlmere, lived with William and Susannah. She eventually married William Jarman who became the publican at the British Queen in Meldreth. It is apparent from the 1871 census that the family had moved out of Frog Hall and into the public house. William was now a widower; he was also an agricultural foreman rather than a farmer with a small tenanted farm and one employee.

Meanwhile, William’s brother John was apparently apprenticed to become a bricklayer. On 25th February 1839 Susan Green, daughter of James Green and Harriet Boutle, gave birth to a son Stephen but did not marry John (his father) until 20 July 1839. They lived at Chiswick End in Meldreth in 1841. My great grandfather David Stanford (born Stamford) followed on 1 December 1841 and his sister Harriet on 15 February 1844. Around the same time that Harriet was born, Stephen seems to have died (Q1 1844, unverified). Susan unfortunately died in 1850, and by 1851 the family had apparently moved to the area of “Melbourne in Meldreth” near the railway. Harriet married Jonas Handscombe in 1864 and John Stamford died around the same time. Soon after this David left Cambridgeshire to live in Camberwell in South London. My grandfather John Charles Stanford was his youngest son. Somewhere along the line David (or his father) changed the spelling…. perhaps local rivalry was responsible – I’m led to believe that the residents of Meldreth and Melbourn have been known to have had the occasional set-to, and the spelling seems to be with an ‘m’ in the Meldreth/Bassingbourne area, whilst Melbourn seems distinctly ‘n’.

In theory, David had left his sister happily married to Jonas Handscombe, but it seems to have not been a happy marriage at all. Her second child, Edward, was registered as born in Camberwell suggesting that she had not wanted to stay in Cambridgeshire at this time. She had returned to Meldreth by 1871 as all of them are in the census together living in the High Street. In 1881, however, both Walter (b.1865) and Edward (b.1869) were in Bassingbourn Workhouse while she appears to have gone into service at a house in St Pancras. I think both boys managed to survive the ordeal of their upbringing, but I have been unable to trace the whereabouts of Jonas after 1871. If anyone can provide information about Jonas (not his father, who died in 1872, aged 69, and was buried at Holy Trinity Church Meldreth on 14 May) I would be most interested.

David married Mary Jane Beck, a girl born in Jersey whose parents migrated when she was a toddler. They had several children, most of whom survived to adulthood. His youngest son’s youngest son was my father, born in 1939 in Brymer Road, which, like some of the houses at Chiswick End, no longer exists today!