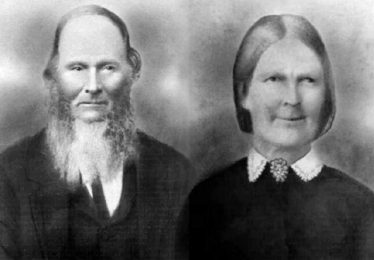 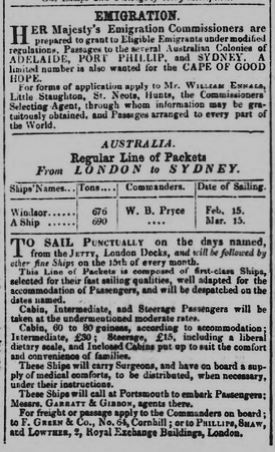 zoom
One of many advertisements and articles in the local press regarding emigration to Australia
Cambridge Chronicle and Journal, 18th January 1851

On 27th October 1854 the 856 ton Shand sailed from Plymouth, England with Captain H Christie in command. On board were 332 passengers bound for Portland Bay, Victoria, Australia, where they arrived on 20th January 1855 after a voyage of 84 days. Almost half the passengers that disembarked there on 20th January 1855 boarded the steamer Champion, bound for Port Fairy, arriving there nine days later.

Among the pioneers to this new land were skilled migrants including masons, carpenters, wheelwrights, bricklayers, plasterers, tailors, sawyers, bakers and smiths. The passage itself was not without incident: Surgeon Superintendent Dr Lightfoot reported seven deaths and fifteen births while at sea.

Amos Lee, an agricultural labourer, his wife Harriet Walduck, whom he had married in Meldreth on 15th October 1848, their son William (aged 7) and Harriet’s two brothers, Simon and Charles were among the passengers. The ship’s log shows that Amos and Harriet, both age 28, and their son were Methodists, able to read and write and were natives of Cambridge[shire].

On arrival in Portland, Amos was engaged by Mr. Halhead of Town Hill at the rate of 60 pounds per annum for a term of six months.

Five months later the Blenheim arrived in Sydney on 6th July 1855 after a fair passage from Southampton, England. She had 306 immigrants on board: 38 single females, 60 single men and 103 married couples and their families. Two births and two deaths (of infants) occurred during the voyage; the majority of the passengers were in excellent health and the ship remarkably clean.

On board was Amos’s brother John Lee aged 38, his wife Elizabeth Rayner aged 37 (religious denomination Baptist) and their children, all of whom had been born in Meldreth:

What prompted so many members of the family to move to Australia is not known. However, in the years immediately before they emigrated there were a number of articles in the Cambridgeshire papers about Australia detailing opportunities for emigration.

An article in the Cambridge Chronicle on 2nd September 1848 gave information about the Australian colonies, stating that, “a supply of labour is the grand want. According to a majority of the witnesses, the colony could receive during the present year 20,000 actual labourers, independently of their wives and families, without depressing to any important extent the rate of wages.” Additional articles in this and other local papers spoke of the “surprising but true reports of the riches and fertility of the Australian Colonies” and invited applications from farm labourers and others for emigration, detailing assisted emigration.

On 2nd April 1853, not long before the family left Meldreth, an article in the Cambridge Independent Press began, “Five years ago, the man who talked and wrote about emigration was sure to be looked on as either a visionary or a bore, or perhaps, as both. Now, emigration is the topic of the day. It is talked of and thought of not only by statesmen, by orators, by authors, by capitalists, by merchants, by all who are members of what are called the educated classes, Also it is talked of and thought of  by millions, who seldom have talked of any public matter before, and who, probably, never thought seriously of any matter at all.”

At the time Meldreth was a small rural community.  The population in 1851 – the year the railway arrived in the village – was just 776 and perhaps John and Elizabeth felt that there would be more opportunities for them in Australia.  They left behind many members of their extended family, who continued to live in Meldreth and the local area.

For a short period after their arrival, the family settled on the Hunter River at Bowthorn.  However, it is thought that a severe drought forced them to leave and within two or three years John and Elizabeth and their family had moved to the Clarence River. Some of the family travelled overland by bullock dray and horseback and some travelled by boat, the SS Urara. When reaching Grafton they found the main street full of mud and cart tracks.

They proceeded to Southgate where they leased land on the river bank not far from the present Ulmarra ferry, from William J Ensbey. William, his wife Ruth and their three sons Charles, John and Alfred, had also came out from Cambridgeshire on the Blenheim. The land was occupied by John on a five year clearing lease and it continued under lease to him and his son Joseph until Joseph’s death in 1908.

The untouched land had to be cleared and farming operations begun by planting corn and potatoes among the stumps and logs. After Joseph’s death in 1908 the land was taken over by William Ensbey’s grandson, John Richard Ensbey.

John and Elizabeth had two more children after they moved to Australia: Joseph on 22nd May 1856 and Elizabeth Charlotte in about 1859.

Mary Anne died of inflammation aged 12, seven years after the family’s arrival in Australia, on 21st January 1862 in Ulmarra. She was buried the following day in the Church of England cemetery in Grafton, NSW.

John Lee died on 18th March 1902 at Southgate at the age of 85. He was buried the following day in the Baptist cemetery in Grafton, alongside his wife Elizabeth who had passed away two years earlier, on the 7th September 1900, aged 81.

An extract from the Lee family tree details the family connections described above.

The next generation had a lot to thank John and his wife Elizabeth for. Mrs Lee was the first lady to meet many children coming in to the world of colonial Australia in the Clarence region of New South Wales. On 7th May 1932 at the celebration of the golden jubilee of Southgate School, a Mr George Boothby proposing a toast, referred to the laying of the foundation stone by John Lee. The mallet and trowel presented to him, remained in the family for a long time before it was given to the Grafton Historical Society. John was also reputed to have been the strongest man in the county of Cambridge.

It has been claimed that John and all his descendants are direct descendants of Amos and Walter Leigh, two of Sir Francis Drake’s captains. (Leigh is the old English spelling for Lee).

An Extract from the Lee Family Tree
(20 KB Adobe Acrobat document, opens in a new window)