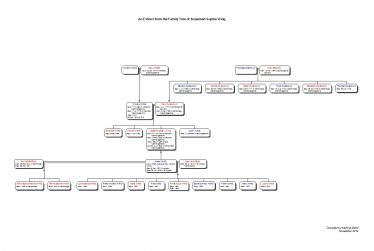 zoom
An extract from the family tree of Susannah Sophia Wing 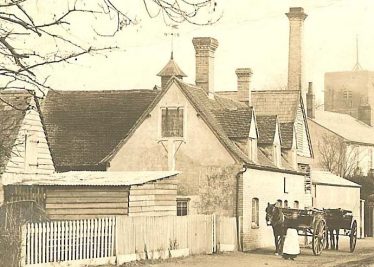 zoom
The Green Man Public House, North End. Was this where the seduction took place?
Detail from a Robert H Clark Postcard supplied by Brian Clarke

This page grew out of our page on the Seduction Scandal of 1820 and is an attempt to identify those named in the reports of the scandal and to identify the public house in which the family lived.

Some of the information below was kindly supplied by Trevor Hamilton, who first added a comment to this site in August 2012, whilst the rest has come from searching online sources such as the parish baptism records found on FindMyPast.  Please click on the family tree to the right to view a detailed extract of the Wing family’s tree or click on the download link at the bottom of this page.

Alfred was born in Holborn, London on 6th May 1821, the illegitimate son of (Susannah) Sophia Wing following her seduction by Augustus Paul Jenkins.  By June 1841 Alfred was working as a schoolmaster in the Cambridge Union Workhouse in Mill Road.  On 28th December 1841 he married Ann Robinson, aged 18, a schoolmistress in the workhouse.  On the marriage certificate, Alfred’s father is listed as Augustus Paul WING (surgeon).  Alfred and Ann had two daughters whilst working at the Cambridge Union Workhouse: Annie Sophia Harriet in 1842 and Harriet Sabina in 1947, named after his mother and aunt (and wife).

By 1851, Alfred was a widower, still working at the workhouse.  In the 1861 census he is shown as being married to Mary Ann Wing (nee Peak) although no record of a marriage has been found.  Alfred is listed as Alfred Augustus, aged 32, a police constable.  The couple had four children, Julia Matilda (8), Alfred William (6) and twins Fredk and Clara (3).  Alfred (William) was born in Dublin in 1855 when Alfred Augustus was serving with the Cambridge militia.

Alfred and Mary Ann went on to have another five children, Annie Maud, Edward Arthur, Frank, Harry and Laura, and lived in London until at least 1891.  His occupation is variously shown as Keeper of Spa Fields Chapel, Accountant and Bank Manager. In all census records, Alfred gave his birthplace as St. Clement Dane in London.

Throughout his life Alfred went by the name of Alfred Augustus Paul Jenkins Wing, perhaps indicating that he remained close to his father, despite the circumstances surrounding his birth.

Alfred’s mother was Susannah Sophia Wing.  Susannah was born on 21st June 1803 and was baptised at Holy Trinity Church Meldreth on 10th February 1805.  She lived in Meldreth with her family until the seduction took place.  She was in very poor health by the time the case came to trial and she died in Cambridge in 1822 and was buried on 3rd July that year.  She was 19 years old.

Susannah’s father was William Wing, who was baptised in Meldreth on 17th July 1774.  His parents were William Wing and Mary Ward, who married on 30th January 1774.  William married Mary Chisholm (see below) on 3rd March 1795.  He died at the age of 40, leaving Mary to raise their four young children, and was buried in Meldreth on 19th August 1814.

Susannah’s mother was Mary Chisholm, who was born in Cambridge in 1777.  She was one of seven children born to Thomas Chisholm and Mary Brown, who married in Cambridge on 15th April 1764.  According to the report of the court case, Mary had moved to Cambridge following the death of her husband in 1814 and had left the running of their public house plus the raising of three of their children in the care of her in-laws, William and Mary Wing.

Where did the seduction take place?

The public house in Meldreth run by the Wing family is not identified in any of the reports of the case we have found.  However, we believe we have narrowed it down to two possible pubs.  The Cambridge Quarter Session records shows that a license was granted to William Wing in 1795 to run the Green Man.  In addition, we know that a James Wing took over the tenancy of the Bell Public House in 1764 and that this pub remained in the Wing family until 1837.  It is possible that these two men were related.  A final clue comes from newspaper reports of the case, where it is stated that Susannah used to visit the house of the Course family, which was “about half a mile from the public house”.  This would indicate the Green Man as the most likely location as the Course family lived in North End.  The Bell is about a mile from where they lived.

An Extract from the Wing Family Tree (20 KB Adobe Acrobat document, opens in a new window)