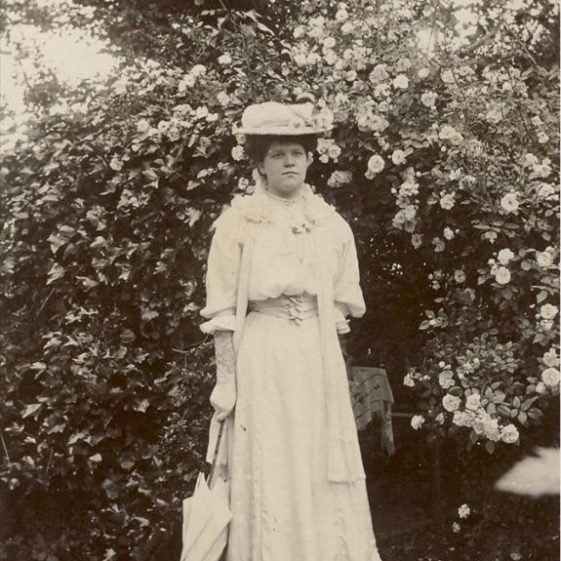 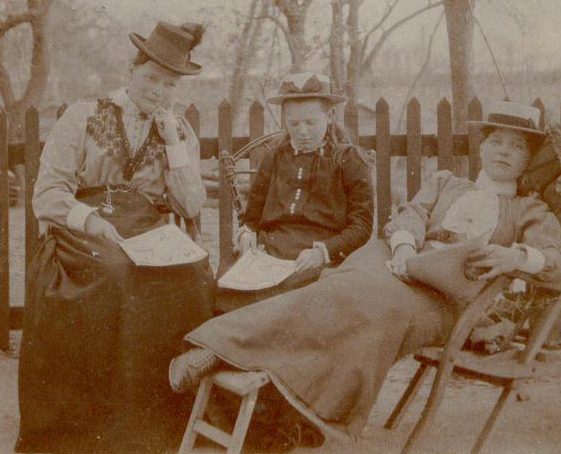 Emma Matilda, May and Louise Nodder at Cornwall House in 1900
Photograph supplied by Barbara Warner 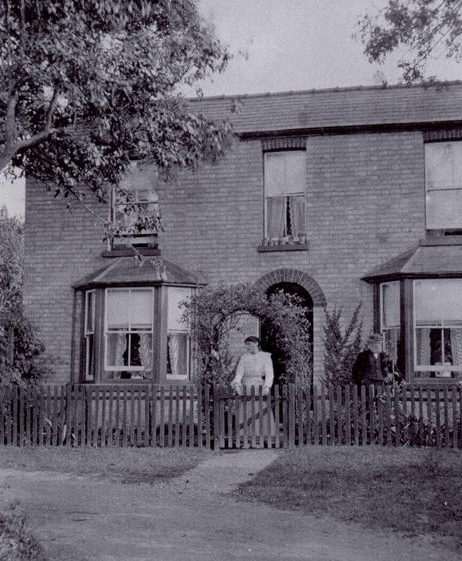 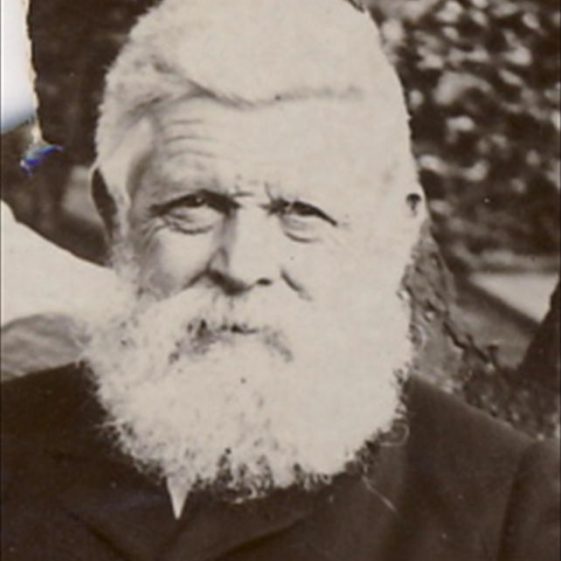 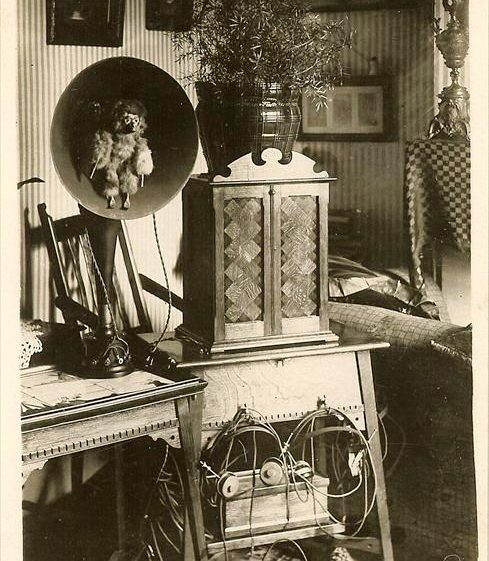 The interior of Torpoint House, 1934 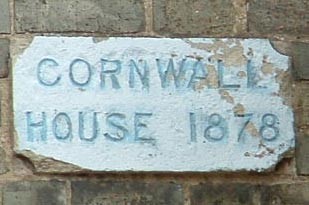 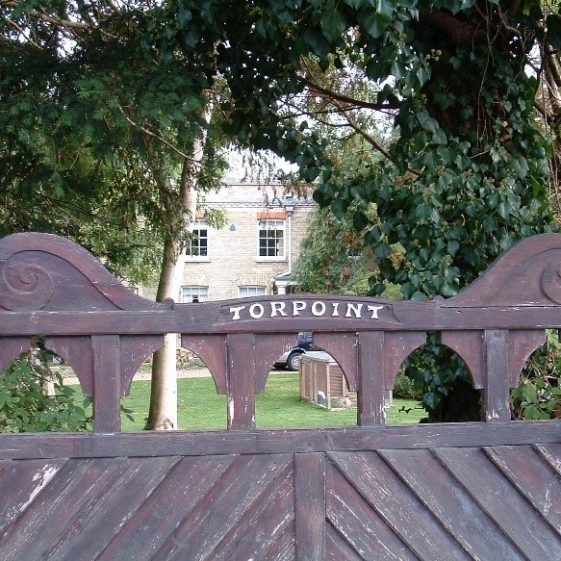 One of the difficulties faced by local history groups everywhere is how to gather information from those families and individuals whose last members have left the area or who have died out. In respect of Meldreth, one such family is the Nodders who were an important part of the community in North End for almost exactly a century until the mid-1970s when the last Nodder resident died. The most curious aspect of their presence is that Nodder is very much a Cornish surname with a strong naval and seafaring tradition – hardly the sort of family one might expect to turn up in a village as far from the sea as Meldreth.

The story of the Nodders’ arrival in Meldreth in the 1870s actually begins with a Shepreth family, the Hopwoods, whose history has been extensively researched by Rosemary Frost. William Hopwood, an agricultural or railway labourer in the censuses of 1841 and 1851, and his wife, Susan produced, we think, thirteen children in the 20 years from 1829 to 1849. All were born in Shepreth. Their two youngest daughters were Mary Ann and Emma Matilda.

In 1868, Mary Ann, by then in her late twenties, married one John Nodder, a ‘Naval seaman’ of Torpoint in Cornwall (just across the Tamar from Plymouth) and they set up home in Torpoint. Their first child was born there later that year. I have no idea how Mary Ann first came to know John as even with the advent of the railways, the journey from Shepreth to Torpoint cannot, at that time, have been easy. Nevertheless, in 1874 Mary Ann’s younger sister, Emma Matilda (pictured above) married John’s younger brother, Alexander (also pictured above). i.e. two brothers married two sisters, thereby causing serious problems for future family historians trying to draw neat family trees.

The sequence of events in the next few years is uncertain. However, two substantial houses were built on large plots of land in Stone Lane, North End, Meldreth after Alexander Nodder purchased the land from William Stockbridge in January 1876. One, called Cornwall House was completed in 1878. The other, called Torpoint, was, I’m sure, built at the same time. Where the money for the land and houses came from I do not know as the Hopwoods seem to have been mere labourers and tenant farmers, while the Nodder brothers were very lowly naval seamen who, it seems from their naval records, hardly, if ever ventured beyond Plymouth Sound. It is tempting to think that the houses were built by William Hopwood, who was widowed in 1876, to encourage his daughters to move to Meldreth and look after him in his old age. This may well be true, although we may never know for sure. Maybe he even named the houses himself to tempt his daughters back ‘home’. If true, it was successful because by the 1881 census we have John and Mary Ann living in ‘Torpoint’ and Alexander and Emma living next door in Cornwall House. Moreover, William Hopwood was ‘lodging’ with Alexander and Emma where, I guess, he lived until he died in 1887 (buried Meldreth June 1887).

Both Torpoint and Cornwall House had substantial orchards planted, I guess around the time the houses were built, and both families became fruit growers and market gardeners, though John Nodder, who had been a “ship’s carpenter” during his naval career, still gave his profession as
‘Carpenter’ in both the 1901 census and in several trade directories from 1892 to 1916. The first mention of the Nodder family as fruit growers appears with Alexander’s listing in the 1912 directory. In 1922 and 1929, George Nodder is listed as a fruit grower.

John and Mary Ann Nodder went on to produce seven children, the youngest of whom was Sidney (‘Sid’) who was born in ‘Torpoint’ house in 1885 and died there in 1973 at which point the house was sold and passed out of the Nodder family. Sid gave his profession as ‘Carpenter’ in the 1901 census and in trade directories from 1922 to 1937.

Alexander and Emma, living in Cornwall House, had five children. When Alexander died in 1916 the house, orchard and market garden business was inherited by his son, George. Alexander’s two daughters were Louise (‘Lou’) and May. In 1926 Louise married Herbert Stearn, one of the famous family of Cambridge photographers. They built the very substantial ‘Brymble House’ next to the railway crossing between Meldreth and Shepreth which also had an extensive orchard which continued to be maintained and cropped by the Nodders. The large ‘Maltings’ building at North End was also owned by the Stearns and used for apple storage by the Nodders.

May, in 1923 married a widower village policeman in Barrington, Albert ‘Bert’ Newell. After some years living in Madingley, in November 1931 they purchased ‘Cornwall House’ from George Nodder for £500.00 and moved in. May Newell thus returned to the house of her birth and lived there for the next 45 years. Bert died in 1974, and May in 1975 thus, like her cousin Sid, dying in the same house that she had been born in. How many other Meldreth residents can claim to have been born and died in the same house?

Brymble House was sold in 1967 after Lou Stearn died (her husband had died in 1942), while Cornwall House was sold in late 1975 and became Meldreth Village Vets. The Maltings, now residential properties, was also sold.

Thus the extended Nodder family arrived in North End, Meldreth from Torpoint, Cornwall in the late 1870s. They built houses, planted orchards, raised families, worked, lived and died there for just under a century. But by the late 1970s they had disappeared from the village. The only sign of them that remains is the 1878 plaque on the wall of Cornwall House, shown on the left and a few gravestones in Meldreth and Shepreth churchyards.