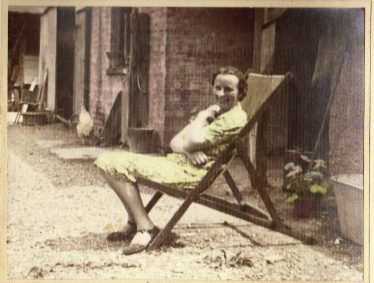 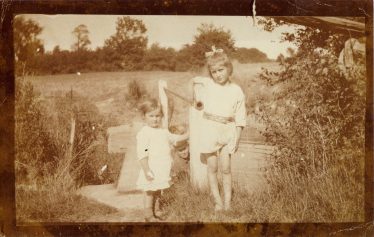 zoom
Evelyn, Sylvia and Norman (can you see him?) in a field near Meldreth Church in the 1920's
Sylvia Gipson 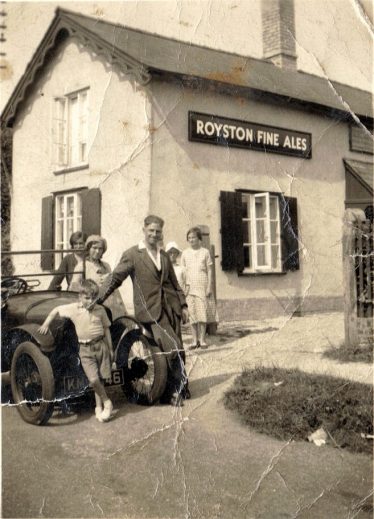 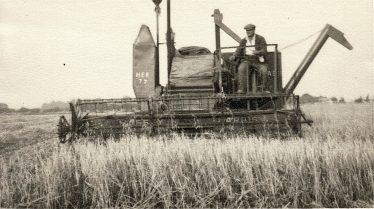 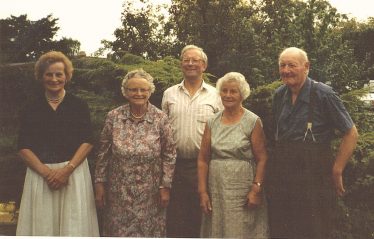 Frederick (Fred) Thurley was born in Meldreth in 1838, the son of William and Mary Thurley. He ran the British Queen Public House from before 1886.

He married Ann Beck, a widow with two daughters, Hannah and Flora. Ann and Fred had a daughter Elizabeth (known as Dolly); she was born in London St Luke’s, an area of Islington, in 1874.

Ann died in 1891 age 57 years and is buried in Meldreth Churchyard.

Frederick married Charlotte Gipson in 1892, a widow, and they went on to have a daughter, Gladys, born 1893. Gladys married Cyril Jarman from Kneesworth in 1927.

Charlotte’s son Herbert came to the British Queen with her. He was given the name Antonious Dore Van Dyke Gipson at birth. But when he came to live in Meldreth, aged 6 years, he was known as Bertie Thurley. He then became known as Herbert Gipson and lived at the British Queen for the rest of his life. He was a skilled carpenter and was commissioned by the Parish Council to make the parish’s funeral bier in 1921-22.  Herbert also farmed a small holding on Mettle Hill in Meldreth.

Charlotte ran the British Queen until her death in 1932.

Herbert married Agnes Ransome, daughter of John and Susannah, in Cambridge in 1908. He was 21 years old and Agnes was 25 years old. They lived at the British Queen with Herbert’s mother Charlotte Thurley and went onto have five children all born in the Public House.

Muriel, their first child was born in 1910. She lived and worked in the British Queen until 1966. She then went to live in a bungalow in Woolpack Way, with her sister Sylvia, until her death in 2002.

Norman was born in 1912 and lived in Meldreth all his life. he married Dorothy England in 1938. They lived in the coachman’s cottage at the Court when they were first married and then moved to Southfield on Whaddon Road, which Norman built. He was a farmer and fruit grower. Norman died in 1995 is buried with Dorothy  in Whaddon churchyard.

Sylvia was born in 1916 and has lived all her life in Meldreth. In 2010 she was one of the guests of honour at Meldreth School Centenary celebrations.

Evelyn was born in 1920. She married Jim Webb and they had a daughter Linda. Evelyn died in 1997 and her ashes are interred in Fowlmere churchyard.

John was born in the British Queen in 1923. He left Meldreth school aged 14 years and was an apprentice at Bridge Garage Shepreth and then to Jack Wedd at South Cambs Motor Company in Melbourn.

In 1942 John joined the army and served in India and Burma with the REME where he ran a mobile workshop.

In 1947 he returned to Meldreth and opened a repair workshop in the barn at the rear of the British Queen pub – despite his fathers reservations, as only a handful of people in the village had cars!

In 1960 he purchase the Woolpack farm from the estate of HOS Ellis and built a garage workshop and filling station on the site which opened in 1961.

In 1979 he retired and dedicated much of his time to bell ringing and restoring not only Meldreth & Melbourn church bells but also bells around the UK. He also installed a ring of 8 bells in Philadelphia USA for the Whitechapel Bell foundry.

He served on the Parish Council for 31 years and  was Churchwarden for 35 years. He has sung in Meldreth church choir  since he was 11 years old and has rung over 1500 peals on Meldreth Church bells – a world record achieved and celebrated in 2008 at the age of 85. John died in 2017.