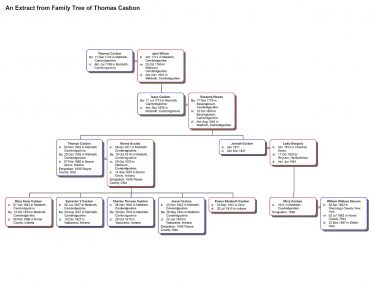 zoom
An extract from the family tree of Thomas Casbon 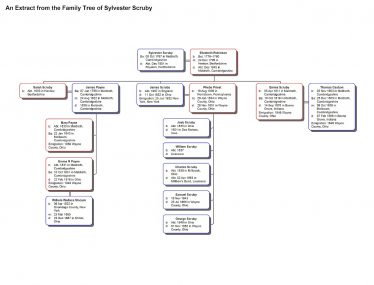 zoom
An extract from the family tree of Sylvester Scruby 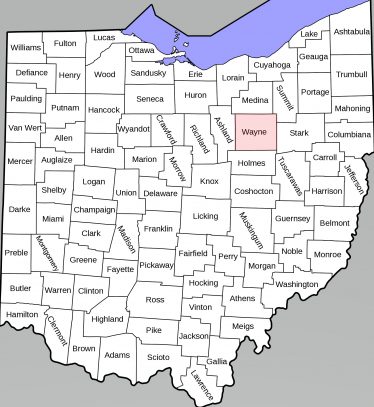 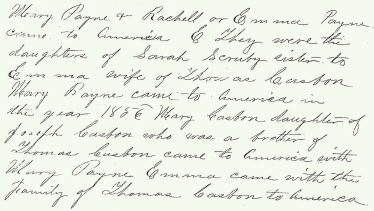 My third great grandfather, Thomas Casbon, emigrated to Wayne County, Ohio, in the United States from Meldreth, Cambridgeshire, in 1846. In the course of my research, I learned that Thomas was not the first person from Meldreth to migrate to that locale. In fact, I’ve discovered that members of at least four Meldreth families ended up in, or passed through, Wayne County in the first half of the 19th century. Besides Thomas Casbon, the other Meldreth surnames are Scruby, Payne (or Paine) and Wing. The story of the Meldreth–Wayne County connection will be of interest to family historians on both sides of the Atlantic, and demonstrates how family and possibly other connections influence migration patterns.

Thomas Casbon was the first son of Isaac and Susanna (Howes) Casbon. His birth on 3 November 1803 and baptism on Christmas Day of the same year are recorded in the Meldreth parish registers. [i] Thomas married Emma Scruby in Melbourn on 9 October 1830. [ii] Emma (born 6 April 1811) was the daughter of Sylvester (“Sell”) and Elizabeth (Robinson) Scruby. [iii] The 1841 England census for Meldreth shows Thomas, an agricultural labourer, with Emma and their three children: Mary Ann (born 1833), “Sell” (Sylvester, born 1837), and Charles (born 1840), all living on High Street. [iv] A fourth child, Jesse, was born in 1843.

I first learned details of Thomas’ voyage to America in a 1912 history of Porter County, Indiana (where Thomas moved in about 1865). Typical of such books, the story is somewhat romanticized. Thomas, described as “an English farmer”,

determined to share in the remarkable opportunities of the new world, and in that year embarked his family at Southampton on board the Canadian lumber boat Parkfield. … At that date one of the few passenger railroads in England was the line from London to Southampton, and many other remarkable changes have occurred in England since then. The streets of London which they passed over were paved with cobblestones, and the modern pavements and subways were undreamed of. … At Niagara the family made the transfer in the horse cars then in use, and all had time to enjoy the spectacle of the mighty falls. From Buffalo they took another boat to Cleveland, where they arrived in the month of May. Thomas Casbon, the father, moved to Wayne County, Ohio, and bought eighty acres of land near Wooster on the Columbus road at the edge of Eddyville, where the stages between Cleveland and Columbus then changed horses.[v]

I haven’t been able to locate the passenger manifest for the ship Parkfield, but we can be certain that it was the vessel taken by Thomas and his family based on the fact that Thomas’ oldest son, Sylvester (my second great-grandfather) named one of his sons Charles Parkfield Casbon. The voyage must have made quite an impression on eight-year-old Sylvester!

An advertisement for the Parkfield appeared in The Hampshire Advertiser on 28 March 1846 (above right).[vi]

This must be the very sailing taken by Thomas. He probably saw an advertisement similar to this before booking his passage.

The description of Thomas as a farmer belies the fact that he was an agricultural labourer, not a landowner. (One largely fictional account written in 1957 has Thomas selling his farm in Meldreth before booking passage on the Parkfield.[vii]) Despite the exaggeration, this account provides valuable information about his motivation to emigrate along with details of the journey. Of his motivation we are told that he was seeking the “opportunities of the new world.” This certainly makes sense. As an agricultural labourer it would have been difficult for him to attain a higher station in life. America, with its abundant cheap land, offered the possibility of financial independence and a better life for his family.

This was probably sufficient motivation to come to America, but the account above doesn’t say why he chose to come to Wayne County. The reason is given in another section of the same book, where we’re told that “James Scruby, a brother of his (Thomas’) wife and a farmer” lived in Wooster, Ohio.[viii] Reasons for migration can often be categorised by “three Fs”: family, friends, or finances. With the revelation that Thomas’ wife, Emma, had a brother in Wayne County, we now know why they chose that specific location.

With this discovery, I wanted to learn more about James Scruby. The Scruby surname appears frequently in Meldreth and Melbourn parish records. “James Scrubie minister” even presided over the parish of Melbourn during part of the 16th century.[ix]

I haven’t been able to locate a baptismal record from Emma’s brother James. He was probably born in about 1806 or 1807, based on the 1850 census and his grave marker.[x] He is probably the man listed as “James Scrubby,” age 26, on the passenger manifest of the ship Plato, which arrived in New York, 26 June 1832.[xi] His reasons for leaving England and coming to Wayne County are unknown.

He married Phebe Priest 29 January 1834 in Wayne County[xii] (Coincidentally, Phebe was probably the half-sister of Elijah Priest, who married Thomas Casbon’s daughter, Mary Ann, in 1853.[xiii]) James and Phebe, along with their sons Joab, William, Charles, Samuel and George are recorded in the 1850 U.S. census for Wayne County.[xiv] Phebe died 28 November 1851 and James followed less than a year later on 11 November 1852, leaving their five sons who ranged in age from three to sixteen years.[xv]

There is an interesting footnote to the story of James Scruby. The advertisement above right appeared in The Portage Sentinel of Ravenna, Ohio, on 29 December 1851.[xvi]

Abraham Dear was apparently the son of James Scruby’s sister, Mary, who lived in Arlesey, Bedfordshire. He arrived in New York aboard the ship Devonshire (from London) on 29 November 1851 (one day after the death of James’ wife Phebe).[xvii] I don’t know whether he found James or any of his children, nor whether he stayed in the United States or returned to England.

I discovered the third surname of the Meldreth–Wayne County connection, Payne, in a handwritten family history that begins with Thomas’ father, Isaac, and ends with Thomas’ grandchildren. I was given a photocopy of this document by an uncle. No one seems to know if or where the original exists, nor do we know who wrote it. Based on details contained in the manuscript, it can be dated to sometime between 1888 and 1892. Besides giving details about Thomas and his family, it refers to Emma and James Scruby, and their parents, Sylvester and Elizabeth Robinson.

The last two paragraphs (above right) introduce two Payne sisters as well as another Casbon relative.[xviii]

The sentence structure and lack of punctuation in this excerpt present a bit of a challenge, but here is the essential message. Two sisters, Mary and “Rachell or Emma” Payne, came to America. They were both daughters of Emma’s sister, Sarah (Scruby), who married James Payne in 1822.[xix] Mary came in 1856 and was accompanied by Mary Casbon, the daughter of Thomas’ brother, Joseph. Joseph died in 1847 and his widow, Lydia (Burgess), died in 1851, leaving Mary (born in 1841) an orphan. “Rachell or Emma” Payne had come to America with Thomas and his family in 1846.

The exact identity of “Rachell or Emma” is confusing. The account given above seems to be using both names for one person, but Meldreth baptismal records have adjacent entries for both Emma and Rachel on 10 October 1831, each listed as the daughter of “James and Sarah Pain.”[xx] Both names appear in different Ohio records, but appear to refer to the same person.

We find Rachel, age 20, listed in the 1850 U.S. census of Wayne County (see the image on the right), on the same page as Thomas Casbon, but living in the household of Emmet Eddy, possibly as a servant.[xxi] Rachel does not appear in the 1860 census, but instead we find Emma R Payne, age 29, as a servant in the household of Josiah B Myers.[xxii] Surely the middle initial “R” must stand for Rachel. Contained in James Scruby’s probate paperwork is a receipt of payment for housekeeping duties signed by “R. E. Payne.”[xxiii]

Another record is very unusual for both its content and style of writing. It is the short biography of a man named William Wallace Slocum, who

The odd spelling is explained by the author in his preface (or prefas), where he states that he has adopted the recommendations of the Simplified Spelling Board of New York as well as the “rulz rekomended bi the Filolojikal Sosieti ov Lundun. Ingland.”[xxv] These organisations sought to simplify and standardise the spelling of English words, in a popular but unsuccessful movement of the early twentieth century.

Spelling aside, the biography tells us that William Slocum married both Mary Casbon (the one who arrived in 1856), and later, Emma Payne. From the accurate description of the voyage from Southampton to Wooster, Ohio, it is clear that this is the same Emma (or Rachel) who arrived with Thomas and his family.

At first, I did not recognise the fourth Meldreth surname, Wing, as it appears in the 1850 U.S. census because it was both misspelled and mis-indexed. James Wing, age 26, birthplace England, was living in Thomas Casbon’s household in Wayne County, but the name appeared to be spelled as “Ning” and was indexed (in FamilySearch) as “Mrig”  (see census image above right).[xxviii]

James Wing was the son of Robert and Mary (Wakefield) Wing. James, age 15, is entered in the 1841 census of Melbourn with his parents, and siblings, Thomas, Elizabeth, William, Charles, Robert, Mary, John and Joseph.[xxxi] James does not appear in Meldreth or Melbourn baptismal records. Based on other records his birth date was probably between 1822 and 1824. There is no obvious reason why he came to Wayne County. Perhaps he was a friend of the Scruby or Casbon families in England and decided to follow or accompany them to Ohio.

Apparently, farming in Ohio did not suit James Wing, and he did not stay there for long. In 1860 we find him in the heart of gold country – El Dorado County, California.[xxxii] There he operated a toll road and later opened a store to supply the local miners. At some point in the early 1860s he was joined by his younger brother John, who married and established a family there. Sadly, James, then a “well-to-do rancher,” ended his own life 8 March 1870.[xxxiii]

For all except James Scruby, Wayne County, Ohio was more of a gateway than a final destination. The United States was expanding rapidly and drawing people westward, with the promise of abundant land or other riches. Thomas Casbon stayed in Ohio for almost twenty years, but eventually followed his sons to Indiana (which I thought of as the family home until I started investigating my family’s history).

For this small group of people, except perhaps James Wing, it seems that James Scruby was the catalyst who drew the others. I suspect there were similar catalysts and clusters, in other parts of the United States (and Canada and Australia), of people who left Meldreth to seek their fortunes in a new world.