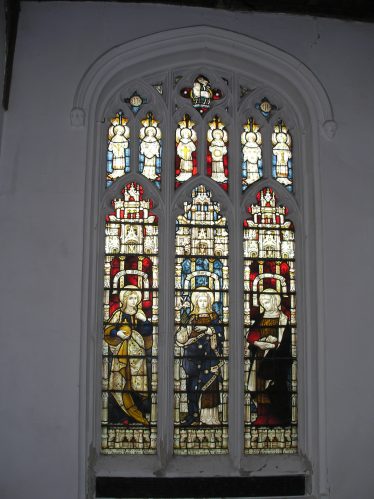 Three generations of Mortlocks are interred in Meldreth Holy Trinity Church.  Although there is a tomb in the churchyard dedicated to John Mortlock (1807 – 1888) and his family, in fact they are not buried there but rather they are interred in the Mortlock vault located within the church itself.  Unfortunately the exact location of this tomb is not known although it is said it is close to the location of the old Pike (Pyke) chapel (now demolished).  This chapel was in the corner where the Mortlock stained glass window is located (see below).  It is very probable that the stained glass window was located close to the vault.  The floor of the church has now been carpeted and in the absence of any plans or local knowledge we can only but speculate of the vault’s location at this time.

John George Mortlock was the last Mortlock to be interred in the vault in 1917.  The parish records have a note in the margin saying Vault opened. Now closed for good.  JG’s daughters Frances and Jacqueline who died after 1917 are buried in Shepreth churchyard as the Meldreth churchyard had been closed to new burials some years before.

The window depicts the three Marys at the tomb of Christ: Mary Magdellen, Mary mother of Jesus and Mary Cleophas (Salome, Jesus’ aunt).

The dedication in the glass reads:   To the Glory of God and in loving memory of Mary, wife of John Mortlock of Melbourne and also Frances and Mary Elizabeth wives of John George Mortlock of this place.

The brass plaque beneath the window reads:

Also located within the church is the Mortlock Tablet commemorating the memory of William Mortlock (1778 – 1833), his mother Elizabeth, wife Elizabeth, daughter Elizabeth and son Charles.  It is believed they are all interred with in the Mortlock Vault.