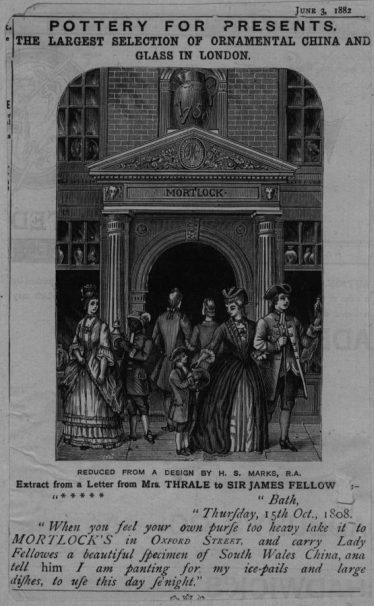 The Mortlock China Company was founded in Oxford Street, London in 1746 by John Mortlock of Sawston (1698 – 1758), the great, great grandfather of John George Mortlock.

John Mortlock was a deeply religious man who never married preferring instead to support charitable works.  Indeed, on his death in 1837, he gave away the then enormous sum of £200,000 to charity.  In February 1834 he gave away a house in London to be a ‘Female Servants Home’.

After parting company with his brother, William founded a new china business at 18 Regent Street (now a Pizza Hut!).  William’s son, also William (1801 – 1879) initially joined his Uncle John in Oxford Street but in 1832 he partnered his older brother John (1808 – 1888) at the Regents Street business.  Their father died in Meldreth in 1833.

In 1835 the younger John Mortlock took over the Oxford Street business when his Uncle retired where he entered into partnership with his cousin Simon Sturges.  This partnership lasted until 1841 whereupon John Mortlock continued alone.

By 1861 John’s son John George Mortlock was living at 204 Oxford Street and was working in the business as a china dealer manager.  By 1871 John had retired leaving John George to run the business.

John George’s uncle William (1801 – 1879) continued in the Regent Street business assisted by his two sons William and Frederick until the business was closed in 1896.

The Oxford Street business continued under the control of John George Mortlock and subsequently his children until the company ceased trading in 1930.

The above information has been distilled from the Mortlock Encyclopedia  written by RJH Griffiths, the world’s foremost expert on the Mortlock family.