Besides the rich and well known William, John and John George Mortlock there was also a second, less known, Mortlock family living in Meldreth headed successively by William of Royston, his son James (1759 – 1827) and James’ son Simeon, farmer and merchant who died in 1867.

William Mortlock of Royston was apprenticed to Matthew Prior, cordwainer of Meldreth in 1738. (A cordwainer is a shoemaker who worked with cordovan, a particularly fine Spanish leather).  Following Matthew’s death William was engaged to his wife, Rebecca, for a short while (the Banns were read on Oct 12 1755) but for some reason the marriage did not take place.  Instead William married Sarah Oliver of Shepreth.

William’s son James was born in 1759.  James was the cousin of the rich William Mortlock, father of John and grandfather of John George of Meldreth Court.  William was one of the executors of James’ will (see below).

James has been variously described as being a farmer, corn merchant and a rubble dealer(!).  He had three children, Simeon, Sarah (see ‘Simeon’s Famous Grandson’ below) and Elizabeth.  From his will (in Cambridge Record Office) we can see that Simeon inherited his stock in trade following James’ death in 1827.  Sarah, Elizabeth and James’ widow Susannah each inherited £5 with Susannah also receiving the furniture!!  She survived James by only one year dying the following year in 1828 aged 62.

Family Connection to The Warren, Meldreth

We know from the auction of William Mortlock’s considerable estate in 1833 that Simeon was living in Lot 5 ‘a pleasant cottage residence with four bedrooms with a stockyard, barn, granary, stable, piggeries and cattle sheds’.  From the map this residence corresponds to the site currently occupied by The Warren although the description of the cottage does not fit.  However, we do know that this residence was leased to Simeon and it is reasonable to suppose that this was also the residence of James and Susannah.  We also know that Simeon was fortunate enough to be able to buy this property in the 1833 auction (see auction detail).

Simeon married four times, firstly to Martha Batson whom he married in Shepreth in 1822 five months before the baptism of their first daughter.  Secondly he married Mary Ann Unwin of Meldreth in 1832 following Martha’s death in 1831 and thirdly Susannah Wing in Knaresborough following Mary Ann’s death in 1860.  Finally he married Sarah Wedd of Harston in Belthorn near Blackburn, Lancashire in 1863 where his brother-in-law was the vicar.  Of the four marriages only his second took place in Meldreth.  Simeon’s second and third wives plus his 19 year old son William are buried in Meldreth churchyard.

Simeon fathered a total of nine children , four with his first wife Martha and another five with his second, Mary Ann.  He died in 1867, aged 67, and is buried in Melbourn in the small cemetery on Meeting Lane by the United Reformed Church. (see photo of grave-stone at the bottom of this page).

Before we leave this Mortlock family special mention must be made of Simeon’s daughter Sarah Mortlock who married Mr George Palmer in Melbourn Congregational Church.  Of their four children, one of them, William, grew up to be William Mortlock Palmer MD FSA of Linton, the noted Cambridgeshire Antiquary and author of Monuments and Coats of Arms of Cambridgeshire as well as other learned tomes.  Dr Palmer produced his first antiquarian work whilst at sea as a ship’s surgeon on the India run.

More information on this branch of the Mortlock family can be found on the RJH Griffiths’ excellent and very comprehensive website on The Mortlocks of Meldreth and Melbourn. 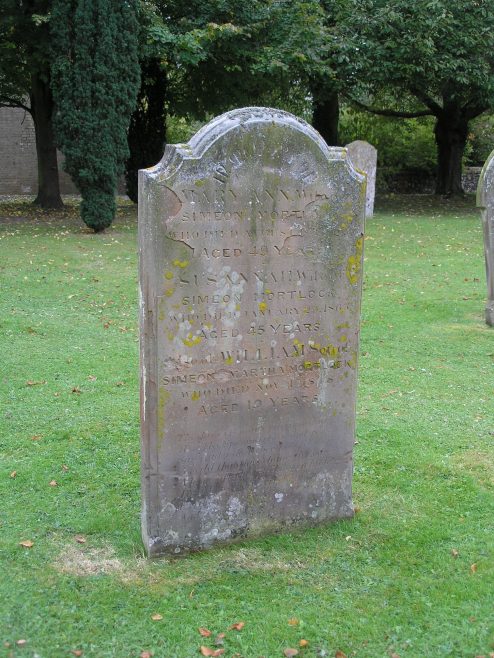 zoom
Grave of Mary Ann and Susannah Mortlock (Simeon's second and third wives), plus William, the son of Simeon and his first wife, Martha. The stone stands in front of Meldreth Church close to the path.
photo by Tim Gane