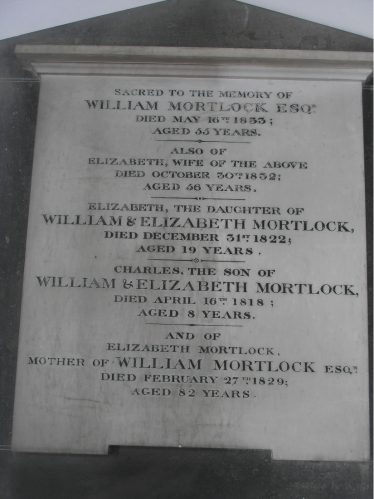 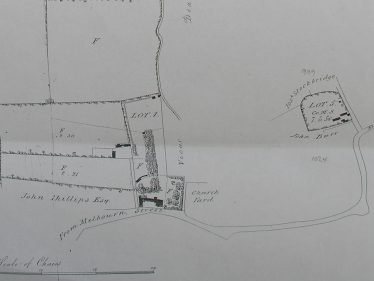 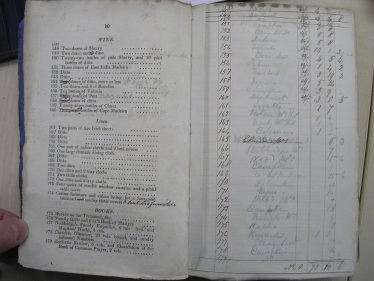 The story of the Mortlock family here in Meldreth begins with William Mortlock, the grandfather of Meldreth’s ‘famous son’, John George Mortlock.  William was born in 1778, the son of William Mortlock and Elizabeth White.

By 1802 William and his brother John were partners in the family china business but soon after their father’s death in 1807 the brothers dissolved their partnership leaving William to carry on the business alone.

William, in the meantime, married Elizabeth Evans in London in 1800 and in 1815, they moved down from St Marylebone in London to live in Manting House in Meldreth.  William and Elizabeth had ten children although only the last, Thomas Samuel, was actually born in Meldreth.

Elizabeth Mortlock passed away in 1832 aged 56. William died the very next year aged just 55 (note: the parish records show his age as 65 but this is incorrect).  Both are buried here in Meldreth Church in the Mortlock family vault.  There is a stone tablet on the wall in the Church commemorating the life of William Mortlock, his wife Elizabeth, their daughter Elizabeth (aged 19), son Charles (aged 8) and William’s mother, also Elizabeth, aged 82.

William Mortlock’s will instructed that all his manors, titles, farms, land etc. were to be auctioned.  This auction took place at The Bull Inn in Royston on July 17th and 18th 1833.

Displayed here is some of the auction detail.  Lot 1 is the present Manting House plus Brewery Farm and some 56 acres of land.  It was bought by William Burr for £4,599.

Lot 5 is the farm tenanted by William’s cousin Simeon Mortlock.    Simeon successfully purchased it at a cost of £210.  The Warren is presently situated on this land.

William obviously had a very well stocked wine cellar with a particular liking for Maderia as the detail of the sale catalogue shows 14 dozen bottles.  They fetched 3 shillings (15p) per bottle!