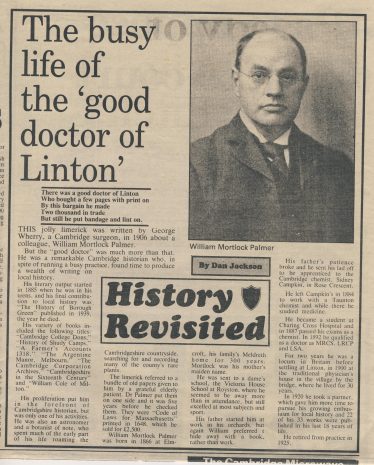 Simeon Mortlock’s daughter Sarah married Meldreth farmer George Palmer in Melbourn Congregational Church in 1861.  William was their second child, of five, born in 1866, in the family home of ‘Elmcroft’, now ‘Whitegates’ in the High Street.  William grew up in Meldreth and aspired first to become a chemist but finally studied medicine at Charing Cross Hospital.  William settled in the Cambridgeshire village of Linton as a GP.  Although an eminent doctor, William’s main passion was local history and he is best remembered for the many learned works he wrote and the lectures he delivered on the history of South Cambridgeshire.  Dr Palmer produced his first antiquarian work whilst at sea as a ship’s surgeon on the India run.

In 1893 Palmer gave a lecture in Melbourn on the subject of ‘Melbourn and Meldreth in the Olden Time’ which was attended by a large and attentive audience.

In 1896, Palmer wrote “Meldreth Parish Records” – an examination of some of the entries in the parish records that he found interesting.

On June 16th 1921 he gave a lecture to Meldreth Women’s Institute on Meldreth Church.

In 1923 he gave a lecture to the Young People’s Guild in the Old Chapel, Melbourn on ‘The Neighbourhood of Melbourn and Meldreth’, a copy of which can be seen by clicking on the document link at the bottom of this page.

William died on April 6th 1939 and is buried at Melbourn Congregational Church with the rest of his family.

George Palmer’s sister Mary married Edwin Meredith Hope of Hope’s Folly which stood in Whitecroft Road until it was demolished in 1967.