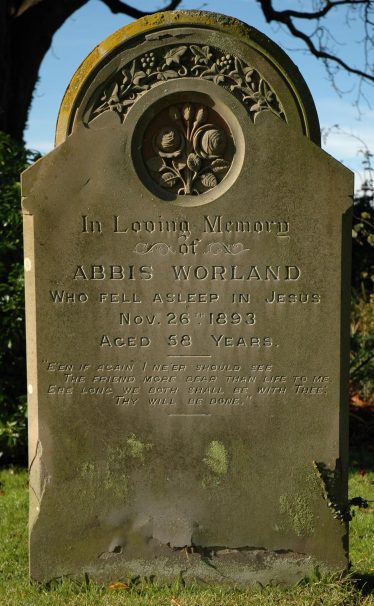 Abbis was born in Meldreth.  His parents were William Worland and Susan(nah) Worland (nee Chappell).  Abbis was baptised in Holy Trinity Church, Meldreth on 10th August 1834.

At the time of the 1841 census he was living in High Street, Meldreth with his parents and his four siblings.  We believe that his father was the publican of The Bell Public House.

Unfortunately, the family appear to have fallen on hard times and William Worland was unable to pay his rent.  A sale of the family’s furniture and effects was held at The Bell in the High Street, Meldreth on 28th December 1841.  The sale included the contents of the kitchen and cellar, tap room, club room, bedrooms and barn.  The lots ranged from “a stump sacking-bottom bedstead and straw mattress” to “four iron spittoons” to “cinder ashes, and dung in the yard”.  The sale raised a total of £22 3s 6d.

Ten years later, the family was still in Meldreth.  Abbis was 16 years old by this time and a scholar, living with his family and two younger siblings.

On 30th December 1860, William Abbis Worland Driver was baptised at Holy Trinity Church, Meldreth, “son of [blank] and Mary Anne”.  Given his name, it seems likely that he was the child of Abbis Worland and Mary Ann Driver, who would have been just 16 or 17 when her son was born.  William died at the age of 2 years and 8 months and was buried on 20th March 1863 at Holy Trinity Church.

In 1861, Abbis was still living with his parents in Meldreth.  Abbis and his father both gave their occupations as cow leech.

The couple had a son, William Arthur Worland, who was baptised at Holy Trinity Church, Meldreth on 9th October 1865.  Some time within the next two years, they moved to Ashwell in Hertfordshire where their two daughters were born, Lilla Susan in 1867 and Mary Ann in 1870.

Abbis’ occupation is given as Farrier in 1871 and as Veterinary Surgeon in 1881.

By 1891, the family had returned to Meldreth and were living in the High Street.

At the time of the 1901 census, his widow, Mary Ann, was living in Valley House [Valley Farm] Meldreth with three of her children, Lilla, Walter and Arthur Gerald.

The youngest three boys were all baptised on 1st March 1903 at Holy Trinity Church, Meldreth.