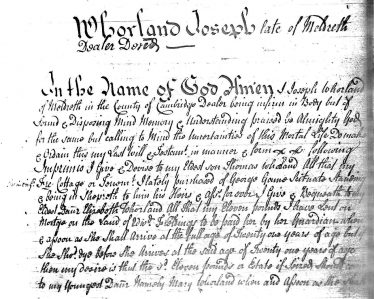 zoom
An extract from Joseph Worland's will
Courtesy of Walter Worland

Joseph was born on 11th April 1703 in Meldreth, to Elizabeth (nee Gore) and Thomas Worland.  He was baptised at Holy Trinity Church, Meldreth on 16th May 1703.

On 9th October 1737, he married Elizabeth Pike at Holy Trinity Church.  Meldreth Parish Registers record the baptisms of the following children who were born to the couple:

Joseph made a will in which is occupation is listed as dealer.  He died at the age of 58 and was buried in Holy Trinity churchyard on 26th November 1761.  In his will, “being infirm in body but of sound and disposing mind, memory and understanding” he left a cottage in Shepreth to his eldest son, Thomas.  He also appointed his “beloved wife Elizabeth” to be guardian to all his children during their minority and stipulated that they were “not to be charged anything for board during their minority”.  To view Joseph’s will, please click on the download link at the bottom of this page.