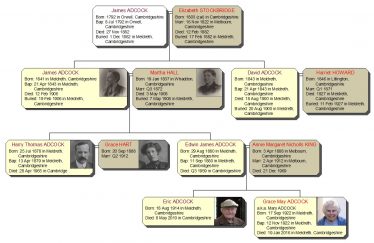 Members of the Adcock family lived in Meldreth for over 200 years and have links through marriage to many other Meldreth families. They were primarily employed in agriculture: their occupations included farmers, millers, agricultural labourers and bakers.

More information on the people shown on this family tree extract is given below. For a more detailed family tree, please click on the download link at the bottom of this page.

There are photographs of some of those listed on the family tree and there is also an Adcock Family Photograph Album on this site.

James was born and baptised in the neighbouring village of Orwell in 1792. He married Elizabeth Stockbridge in Melbourn in 1822 and settled in Meldreth, where they had six children including his youngest sons, James (b. 1841) and David (b. 1843) who are listed below. He died in 1882 and was buried in Holy Trinity churchyard, Meldreth.

In the 1871 Meldreth census, James was living with his parents and brother David. He and David both listed their occupation as miller.

James married Martha Hall from Whaddon in 1872 and they had five children:

In 1875 James took a lease to Topcliffe Mill which was owned by St. Thomas’s Hospital in London. The family continued to hold the lease of the mill until the 1940s, although they sublet the mill to the Peters family from Orwell from 1887 to 1897.

According to the 1881 census, James Adcock employed “one man and one boy” at the mill. His occupation is listed as farmer in 1891 and in 1901 as “miller and farmer”.

At the age of eighteen, David was employed as a journeyman baker in the nearby village of Litlington. Ten years later, he married Harriet Howard from Litlington and the couple moved to Meldreth, where David helped his brother run Topcliffe Mill.

By 1891 he had returned to his earlier occupation of baker, working in one of the bakehouses in Meldreth High Street.

According to Sara Butler in Meldreth Village, “Every household baked their own bread. My father made ours, I can picture him now, kneading the bread in a huge wooden trough. When the dough had risen, he would put it into pillow cases for us to wheel in our little handcart down to the bakers, who would make and bake the loaves for us. The baker would always cook our Sunday joint on special occasions when it was a large one.”

James Adcock’s son, Harry, married Grace Hart in 1912 and they lived in Geneva House (pictured right) near the Stocks.

Harry was the last miller to operate Topcliffe Mill, running it until it closed in 1942.

He was described as a “grand old man of Meldreth” in the report of his funeral that appeared in the Royston Crow in May 1965, which stated that “The death of Mr Harry Thomas Adcock has removed a well-known personality from Meldreth and one who was known and respected over a wide area of Cambridgeshire.”

Edwin was a miller and farmer, helping his family run Topcliffe Mill in North End. In 1914, Edwin’s son Eric (pictured below right with his sister Mary) was born in the cottage attached to the mill (see the photograph on the right). According to Mary Findlay (nee Adcock) the cottage was in a poor state by this time and rats could be heard running across the attic from the adjacent mill.

A few years later, in 1917, Edwin Adcock bought Court Lodge in the High Street from John George Mortlock and the family moved there.

Mary Findlay lived in Geneva House until her death in 2016. Her daughter Jane remained there, before leaving the village in 2018; thereby ending the long association that the Adcock family had with Meldreth.