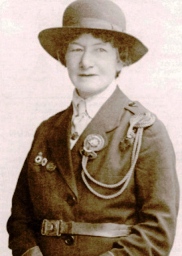 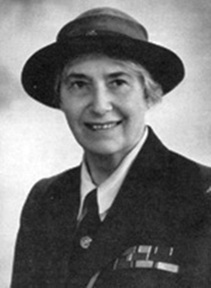 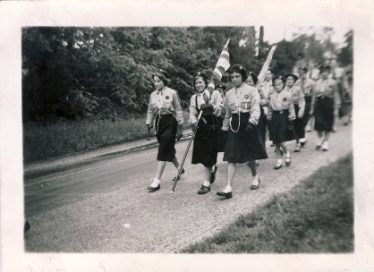 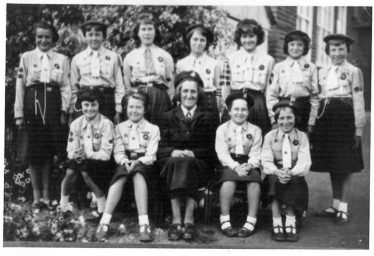 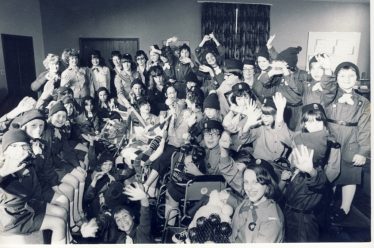 Robert Baden-Powell founded the Boy Scouts as an organisation in 1908, a few months after the first scout encampment at Brownsea Island Scout Camp in 1907. The idea came from his experiences with the British Army in South Africa. Girls also became interested and started forming their own groups and calling themselves ‘Girl Scouts’. Camping and hiking among girls was uncommon at the time, nevertheless Girl Scouts were registered at Scout Headquarters. In 1909 there was a Boy Scouts’ Rally at Crystal Palace in London. Among the thousands of Boy Scouts, at the rally were several hundred Girl Scouts who asked Baden-Powell if they could join in.  Following negative publicity in “The Spectator” magazine Baden-Powell decided that a separate single-sex group would be best so he asked his sister Agnes Baden-Powell to form a separate Girl Guides organisation and in 1910 The Girl Guides were officially formed in the United Kingdom. The first Guide Company to be registered was 1st Pinkneys Green Guides (Miss Baden-Powell’s own), who still exist in Pinkneys Green, Maidenhead, Berkshire. Many, though not all, Girl Guide and Girl Scout groups across the globe trace their roots back to this point.

Olave led the Guide Movement worldwide for forty years, travelling all over the globe helping to establish and to encourage the Guide Movements in other countries, and bringing membership to over six and a half million worldwide. At the age of 80 she was diagnosed with diabetes which eventually led to her death, aged 88 in 1977.

On enrolment, all Guides make the following promise:
“I promise that I will do my best, to be true to myself and develop my beliefs, to serve the Queen and my community, to help other people and to keep the Guide Law.”

The earliest record of a Guide Company in Meldreth is in 1955 when it was led by their Captain Mrs Carol Mead and her Assistant Mrs Audrey Hollamby. They were known as the 1st Meldreth Guides (Holy Trinity) as their colours had been blessed in Meldreth Holy Trinity Church. They held their meetings in Meldreth School. The Company was disbanded in 1963 and was not re-formed until 1973, when the 3rd Meldreth Guides was formed. In the meantime, there was a Guide company at Meldreth Manor School (see below).

The Captains and their Deputies were as follows: