You are here: HomenextPeoplenextIndividualsnextDennis and Dorothy Pepper 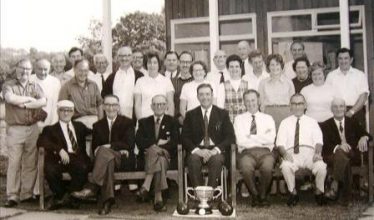 zoom
Meldreth Bowls Club pictured in 1972. Dennis centre of photo with Dorothy standing behind him.
Photo supplied by Alison Chalkley

The following article first appeared in the May 2008 issue of Meldreth Matters.

Friends and family of Dorothy and Dennis Pepper gathered at Meldreth Bowls Club on 14th May 2008 to celebrate the couple’s Diamond Wedding anniversary. Those present included daughter Sarah and son David, who had travelled from Paris and Moscow respectively, with their spouses Peter and Tatiana, for the occasion. The Bowls Club was a fitting venue, Dennis having been the club President in 1998 and Dorothy in both 2001 and 2006.

Dennis and Dorothy were married on 15th May 1948 at St. Stephens West Twickenham. They have spent most of their married life in Meldreth, Dennis being the third generation of the Pepper family to occupy Brewery Farm.

So how did a primary school teacher living and working in London meet a farmer in South Cambs? One of Dennis’s sisters, Christine (a nurse) was married to Alan (a surgeon) who happened to be a life-long friend of Edgar, who was married to Dorothy’s sister Kathleen. Edgar and Kathleen lived at Horningsea and when Christine and Alan came to Meldreth Dennis drove them over to visit. Dennis was invited to visit anytime, not just when he was bringing Christine and Alan. On one of his visits Dorothy was there. Kathleen had been matchmaking and invited her sister to meet the vicar of Horningsea, a bachelor. However they had run out of bread for tea so Kathleen sent Dennis to Fen Ditton to buy some and Dorothy went with him and the rest, as they say, is history.

We would like to wish Dorothy and Dennis many more happy years together in Meldreth.