You are here: HomenextPeoplenextIndividualsnextSarah Louise 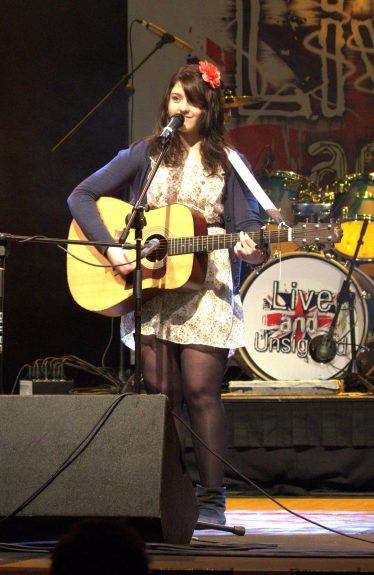 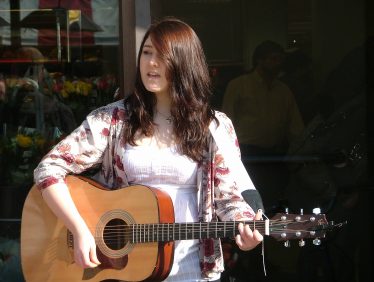 In February 2011, Meldreth resident Sarah Louise performed at Frollies, a village talent show, where she sang a few songs, accompanied on her guitar.

In May 2011, Sarah got through to the Midlands Area Final of Live and Unsigned, a national competition for original music artists which attracts around 10,000 entrants each year.  The Area Final was one of six across the UK, and took place in Bedford on Saturday 7th May 2011, with Sarah appearing in the lunchtime session.  Unfortunately, Sarah Louise was not one of the two acts chosen to go through to the live final at the O2 in London.

Sarah Louise has established herself as part of the vibrant music scene in Cambridge. She can often be seen and heard busking in Cambridge city centre, attending open mic nights and has appeared on local radio a number of times.  A video of her at the Cambridge Folk Club singing Silken Lace can be seen on youtube. She has also performed at local events in Meldreth, including at Meldreth Manor School.

The principal of Meldreth Manor, Roger Gale, commented:
“Sarah Louise was kind enough to perform at our Fete party in June and as soon as she began to sing my team and I realised that we were witnessing something special. Sarah is that rare thing – a special talent with no sense of just how good she is – I only hope she comes back to see us again next year.”

Nigel Pellatt – Event Organiser, added:
“I have followed Sarah Louise’s career since the area finals of the Live and Unsigned national talent competition and hearing her on BBC Radio Cambridgeshire – she has been kind enough to perform at functions I have organised over the past year and I look forward to working with her again, and again.

A great personality, a great voice and songs written and sung from the heart. Very easy to work with and clearly a new fresh talent – if you haven’t been smitten by her voice yet I suggest you get to see her before the prices go up!!!”

Sarah Louise released her debut album, Made in June 2012.