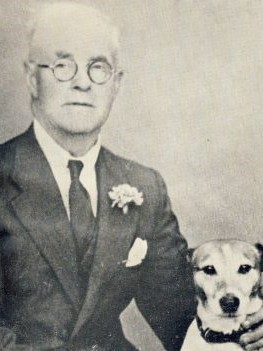 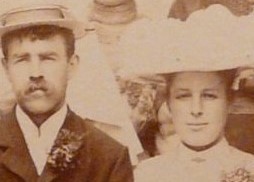 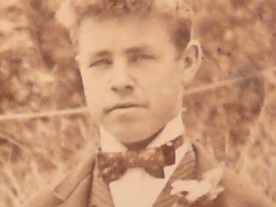 Arthur Pepper was the second child of agricultural worker Samuel Pepper and his wife Fanny (nee Hinkins). Whilst born in 1876, by 1881 he is shown on the census as living in Meldreth in a house called ‘White Croft’ at the northern end of Whitecroft Road. This rented house was owned by the Casbon family.

Later in life, Arthur wrote an account which describes his time as a boy in Meldreth and his period of WW1 service in the RAF. On the first page of his life story he says:

The idea of telling my life story is to show what a poor boy from a family of 12 can do without any education or being apprenticed to anything, so long as one takes notice as they go about and take an interest in all what they do.

I always took an interest in everything I saw and what people did, which helped me in later life, and I also tried to improve on everything, whether farming, carpentry etc as you will read from the interesting occupations I have been in during my 88 years. The facts are told in my own words as I remember them.

Some more extracts are given below and a link to the full document can be found at the bottom of this page.

Arthur went to school when he was five but had to frequently stay at home to look after all his siblings so he never completed his schooling. His father was summoned to the Magistrates Court because Arthur had such a poor attendance at school. However, there was no fine as the Magistrate was not there on the summons day to hear the case!  Arthur did go to the Council School in Melbourn for carpentry classes.

When he left school his first job at 12 years old was a hay and straw binder. He travelled all over the county, often walking 15 miles home at the end of the week. Later he worked on the fields with horses, sleeping in the harness room. A very hard life.

At the age of 14 he was gardening for Mr Mortlock at Meldreth Court and stayed for a few years. He remembers wheeling Mr Mortlock’s luggage to the station morning and evening, sometimes at 9pm at night. He had very little time to himself. Arthur spent a great deal of time watching people at work to learn different skills.

He moved on to Babraham Court, Cambridge as a journeyman gardener for one year. He returned to Meldreth Court for another few years as Head Greenhouse Gardener. In 1903 Arthur then applied for a head gardener’s job in Harston where he started his married life with his first wife Maud. At the same time he became involved in a cycle business in Meldreth called S. Pepper and Sons, with his brother Walter. Walter worked for the railway and it was against railway rules to have two jobs so Walter gave up the railway work and with the help of another Pepper brother, Albert, the three brothers started to expand their cycle business into Royston.

Arthur continued to work in Harston for the next ten years but also became involved with building work and designing some new technology of the time such as a carbide generator. He would win prizes at shows for his vegetables. He admits that he never got a pay rise from his employer during this ten-year period. When National Insurance came in during 1911, his employer deducted it from Arthur’s wage leaving him with a shortfall. This finally persuaded him to leave and go to a new job working in gardening for Dr Salaman at Homestall in Barley.

In 1914 WW1 began and Arthur continued doing jobs such as trench digging on the home front.

In May 1918 he was called up to the Air Service Unit of the RAF (the RFC was renamed the RAF in April 1918) to erect aerodromes and hangers. Arthur was sent overseas and initially his war story mainly describes the poor food. It appears that in true Arthur style he took over the cooking himself to achieve some improvement. He was moved to Maurai close to Cambrai. He speaks about Cambrai in detail:

I remember a church in Cambrai being blown to pieces and Christ on the Cross remained still standing as if nothing had happened. The Cambrai road was the first place they used Churchill tanks. I saw them knocked out. They only wanted the travelling gear hitting and then they were no use and I was told there were still men at the wheels of some of them.

Arthur stayed on into 1919, finally being demobbed and discharged from the RAF in 1920. His memories are given in full in the document attached below.

Arthur returned to Homestall, Barley in 1919 but found that his brother Albert, who farmed in Therfield had died, so he took over Albert’s rented farm. Arthur had also lost two other brothers, Ernest and Samuel Mark who died in conflict during the First World War.

During his time at Dane End on the farm he took an interest in poultry as he found good profit margins in that business. In 1925 he heard that his landlord was going to sell the farm so he bought a piece of land (29 acres) off the Newmarket Road, Royston, from another of his brothers. In those days you could just build a bungalow on your land without planning permission and that is what he did. Arthur worked hard and had 3000 birds laying 2000 eggs a day. He even designed and patented field bird houses and night arks, so he was certainly becoming a businessman and was proud of it. He ran the business all through the Second World War.

After Arthur lost his first wife, he had several housekeepers and married one of them, Miss Winifred Tremain in 1946 and once again enjoyed life to the full.

Carry on reading Arthur’s story in the booklet below. He had such a positive outlook on life as can be seen from his own words at the top of this article.