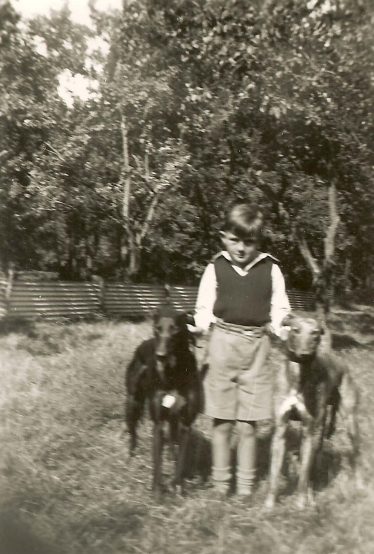 I was born in 1942 and lived at Westacre on Whitecroft Road.  At that time the property was surrounded by orchards.  The houses in Howard Road have since been built on one side.  The other side was owned by the Howard family and at the rear was another orchard where the bungalows by the recreation ground stand. Opposite my house was an open field where horses, owned by the Parker family from North End, grazed.

As a boy I remember Meldreth being full of orchards, which were mainly owned by the Howard and Palmer families.  I spent many happy days at Fenny Lane Farm with the Hart family and have remained very good friends with Roger Hart, who still lives in Fenny Lane.  Our mothers were great friends when we were young.

One of my earliest memories is the sound of the American Bombers coming back to Bassingbourn after bombing raids over Germany.  I could only have been two or three years old at the time but I will never forget it.

My father also trained greyhounds and when I was old enough I would walk them along Whitecroft Road, turn up Kneesworth Road, past Thurley’s sweet shop (the end house in West Way, which was known as Donkey Hall or New Russia) and walk up towards Mettle Hill where there would be bombs piled high beside the road.  Once I reached roughly where Mark Harrup had his orchard I would turn around and come back.  My other route was along Whaddon Road towards the Atlas Stone Company.

Occasionally the greyhounds would spy a cat along the road and try to chase it, but I held on with all my might and I do not remember any dogs getting away from me.  It was usually a peaceful walk and there was very little traffic in those days.  My father trained the Greyhound Derby winner Duleek Dandy in 1960.

I did not meet many people of my own age in the village because I was away at school, but I was friendly with Nigel Handscombe who lived in North End and I remember Brian Mayo, Alan Chamberlain and David and John Smith.  When the houses were built in Howard Road the families who lived in numbers 1 – 7 were Harry and Ivy Jude, Fred and Francis Sims, Reg and Ruby Rumble, and Basil Dash with his lodger Doug Starling.  Basil was a village character who played the mouth organ and liked to sing, especially after a glass or two of whiskey!

Growing up in Meldreth was very peaceful and pleasant.  The majority of families who lived in the village had some connection with working on the land or working at The Atlas Stone Company.

I was very interested in football and cricket and my father, who played football for Orwell, would take me to the Atlas Football ground in Melbourn for the Foster Cup Final.  A photographer, Herbert Chapman from Whaddon, would take the team photographs and he also covered the local weddings.

I remember Carol Mead organising a village celebration and my father lent a couple of his lorries to carry the floats.  I cannot remember the occasion for the celebration, perhaps it was the coronation in 1953, but I do remember some village girls, including Barbara Cox from Whitecroft Road, dancing the cancan!

I used to catch the 108 bus to school in Cambridge and more often than not, Dennis Watson was the driver and Ida Rosendale was the ticket collector.  Nearly every day I would see Len Hunt and Dora Jude delivering the milk by horse and cart. Other people I remember are Miss Marment, who lived at Hope Folly, Harry Hadcock, Dave Huggins, Mrs Dainty, Doctor Hall, Ethel Mead, the Sunday School teacher, Fred Chandler and Diana Burgess.

This article first appeared in Meldreth Matters in December 2006.