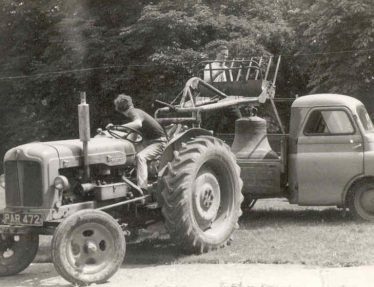 zoom
David Pepper on the tractor, with John Gipson behind
Photograph supplied by John Gipson 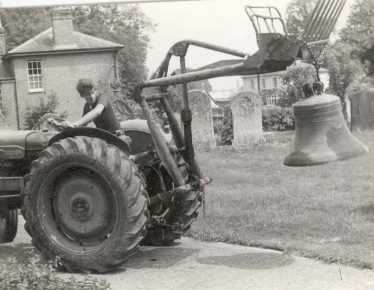 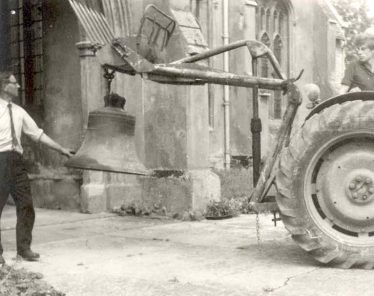 John Gipson taught me to ring at Meldreth in the early 1960’s.  My father, Dennis Pepper, was a long-time bell ringer and friend of John’s so I naturally followed in his footsteps. As a child I had accompanied my father on Ely Association ringing tours or “tower grabs” and also to ringing for evensong at Holy Trinity and All Saints.  In 1968 when John asked me to help him with the work on the bells I had already rung my first peal of Plain Bob Minor, I believe the last peal on the six before the work on the bells started.

The idea of augmentation of the peal of six to an eight began when John purchased a scrap bell from an old chapel. It was sold as being 6 cwt. But on weighing it was 11 cwt. so that helped towards the cost as bell metal is very expensive, being 77% copper and 23% tin. John had decided to remove all the bells from the tower except the tenor that would remain in place. The old fifth was a poor bell and not pre-reformation so it was going to be recast as was the old second; the old third and fourth were destined for tuning; the old treble was fine but was to be re-hung in a different place.

I helped John remove the bells from the frame and lower them down to the floor of the ringing chamber so that they could be taken out of the church. This was achieved using a collection of hand operated hoists, our four wheel hand cart from Brewery Farm and our old Fordson Major tractor with a rear loader which I drove (see photograph). The tractor just fitted inside the church porch so I could lift the bells off the handcart in the nave doorway and put them on Ralph Newell’s Bedford pickup for them to be taken to Whitechapel two at a time.

While the bells were away in London, John set about the necessary alterations in the belfry to accommodate the two new bells, being a new treble and second. The new second was hung above the old second (now the fourth) so I found myself hauling pieces of steel up the side of the tower onto the tower roof to be lowered down into the belfry and bolted in place. The old treble, now the third, was hung on an extension frame in the north facing window alcove in the belfry and bolted to the main frame. It was a very tight fit, necessitating removing the flight from the clapper so it could clear the frame when ringing (the new treble being hung in the main frame where the old treble had been). I duly ended up painting all the new steel frame additions in red oxide.

Friends and ringers helped with the project, Bill Newman of Litlington who was a regular Wednesday evening practice ringer and very good carpenter made the wheels for the two new trebles. One thing I remember about Bill was that he had a Vincent 1000 cc twin Black Shadow motorcycle which he used to ride to bell ringing practice in the summer months.  Another of John’s peal ringing friends nicknamed “Dumps”, who worked for Standen’s of Ely agricultural machinery manufacturers, supplied the ball bearings to mount the new trebles on the frame. So it was quite unusual that the eight bells ended up with the front three on ball bearing and the back five on plain bearings but it didn’t seem to make any difference ringing them, they went very well when all was finished.

We all went to see the new bells being cast at the Whitechapel foundry; that was a fascinating day. When you arrive at the foundry and walk through the front door the profile of Big Ben surrounds the door frame. (Whitechapel cast Big Ben.) Frank Harper, who regularly rang the tenor in the Melbourn Sunday service band, threw his war medals in as they were being cast to give them a “silvery tone” he said.

The new bells and the re-tuned bells all duly returned from Whitechapel and were installed in the belfry along with new bell ropes. I rang the first peal on the eight conducted by John being Plain Bob Major. There is a peal board in the tower marking this event.

Further information on the bells is available on the Holy Trinity Church website.