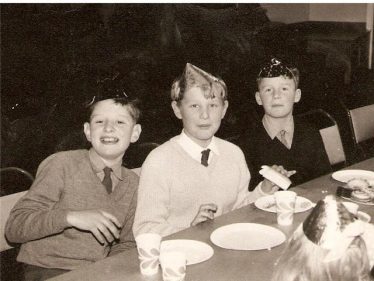 This memory was first published in Meldreth Matters in October 2008.


Seeing an old picture of myself with “Bish” and John Isles at the Eternit Christmas party, I wondered if you may be interested in the following story.

My eldest daughter is now eleven. What did she do over the summer holidays? Certainly she did not have the freedom I had at that age.

A typical summer’s day back then would begin about seven with a quick breakfast.  That complete, with a parting cry from my mother of, “don’t get into mischief” it would be away to meet up with about four friends who all lived fairly near to Chiswick End in Meldreth, where, almost at the far end, was our rented bungalow.

It was going to be hot again and the Green Plunge (in Royston) was to be our destination.  To us it was a marvellous place to spend the day.  Lying on the grass, swimming, diving and going to the café behind the fountains for a drink, something to eat or a game of pinball (if the older boys ever left an opening).

Everything was easier back then.  Common sense stopped people swimming under the diving boards and although lifeguards were in attendance the constant whistles of today were not heard and much fun was had. By comparison, the new pool is now a soulless, rather sterile place.

The next problem of course was money.  This was a problem easily overcome.  A walk across the fields to Bassingbourn and the pea fields only took about twenty minutes.  The proper “pickers” would have been picked up by the old, bull-nosed Pepper’s bus at around six and were already hard at it.  Full green bags of plump peas were already stacked, awaiting the lorry to take them off.  We never found out where, but used to tell people that they were the ones headed for the TV advert for Birdseye, and make popping sounds with a finger in the mouth.  A green, large, net bag was procured from the weighing man and we found a spot to start picking.  It took about an hour to fill a bag, have it weighed and to be passed the three shillings and fourpence (I think).  The professionals were in the field by five.  They professed that the dew on the early morning peas meant they picked less for a bag.

Money in pocket we were off and an hour later would be at the pool.  Sometimes we would buy some cheese and a drink first from Browns supermarket for a lunch break before entering the “Plunge”.  Late afternoon would be the walk home along the road as far as Melbourn Bury and then across the fields to Chiswick End.

Mum would be pleased to see us and would ask of our day.  We all had felt safe and she didn’t worry until after six, when the threat of being kept in for the following day would kick in.

Our days were always adventurous and varied.  The woods, making a raft for the river, avoiding the farmer (great sport) and making discrete camps amongst his bales, harvest time, fruit picking for Bill Dash from orchards now all grubbed up.

I doubt if my daughter will be allowed such freedom and find it a bit sad that she will miss out on the joys of such simple pleasures of finding a pheasant’s nest or walking to the Green Plunge.