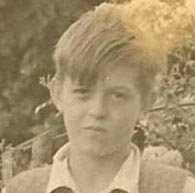 I was four years old when the war started and the following year I started school.  Meldreth School had an air raid shelter which was made from a galvanised tin shed half buried and then covered over with earth.  At home my father dug a large hole in the garden and used railway sleepers for a roof.  On a trial run I remember sitting in the school shelter and thinking, I don’t feel safe here, I would rather be outside in the open.

The air raid siren was sounded occasionally.  It was a very haunting sound that seemed to indicate something dreadful was about to happen.  On one occasion when walking home from school, it was just getting dark and starting to snow, when the air raid siren sounded.  I was opposite the thatched cottage by the track leading up to Mr Sheldrick’s/Flambards Farm and sheltered by the high wall with hazelnut trees overhanging. I remember vividly the haunting sound and the eerie quietness and unlike in the school air raid shelter I felt so safe and secure there. I stayed for a while in my cosy position but decided to go home because mum might get worried.  During the war a number of German aircraft were seen and bombs were dropped, as referred to in the extracts from my father’s diary.

Bombing missions were flown every day from Bassingbourn Air Force Base.  The planes circled over our house at the same time each afternoon, upon returning from Germany.  They would often have parts missing from their tails or wings and some had engines stopped or were minus their propellers.  We occasionally walked to the base to watch the planes landing.  We would go via the Atlas line to Kneesworth Road so as to miss the guard post at Donkey Hall (West Way).  Kneesworth Road was closed as it was used for storing bombs.

American servicemen were later stationed at Bassingbourn.  We did not get on too well with them: they did not understand football and their only interest was the local girls.  The girls seemed to like them.  The German prisoners of war were very different.  For some reason they were often at Meldreth Railway Station and would cheer us on when we were playing football on the Meads.  They would offer us biscuits from a small tin that they all had and ask our names.  I remember that they could never pronounce my name. It was always “Kennif”.  The Americans would ask the names of our sisters or the girls down the road!!

My Saturday morning job (I had to do one job each day that I didn’t like doing) was to go to the village shop to buy the week’s supplies and our ration of sweets.  I would have to wait my turn for Mrs Handscombe or Gordon to serve me.  Being small and hidden by the counter I would often miss my turn and be there for what seemed an age.  If Gordon served me, mum would always check his adding up as he often made a mistake.  Even if Gordon had under charged us I would still have to go back and sort it out.

I suppose we were fairly lucky as far as food was concerned as we kept chickens and rabbits and grew all our own vegetables.  Our breakfast every day was bread and milk except for Sundays when we had sausages boiled in gravy.  On Mondays we usually had tripe which we loved and on Fridays, herrings which I hated because of the bones.  Sunday tea was a real treat as we had spam sandwiches.  At school we had a spoonful of cod liver oil and malt each day (all of us from the same spoon!!) and a third of a pint of milk.  Some of the girls didn’t have theirs so us boys usually had two bottles, or even three.

Towards the end of the war we, and I suppose many others, would write ” V…- ” (dot dot dot dash) for Victory on the road or a wall or fence to support our soldiers and airmen.  I do not remember VE day.  I don’t think too much went on in the villages.  We probably had a day off school.