You are here: HomenextPeoplenextObituariesnextJoan Gipson (1929-2015)

Joan Gipson Remembers Her Time in The Good Companions Club 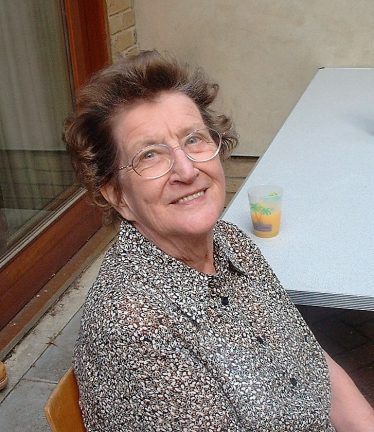 Joan was born in 1929 in Longstanton the only daughter of Charles and Ida Cook. The family moved to Newton where Joan’s brother Albert was born in 1930. Joan’s father, Charles, worked as a signalman at both Harston and Foxton stations.

Joan attended Newton village school and then in 1939 went to the Cambridge and County High School for girls. She was one of the first girls to go to the new school in Long Road – now Long Road Sixth Form College.

Only last summer Joan and her lifelong friend Joyce Carter spent time with Hilary Roadley from Harston Local History Group reminiscing about their youth. Joan delivered the post in the school holidays, picking up the mail from Harston Post Office where Joyce worked and then cycling back to Newton to deliver it. Joan recalled that she always had to deliver to Lord Walston at Newton Hall first.

After the war Joan trained as a teacher at Stockwell College in Kent and then went on to teach at the Brunswick school in Cambridge. During the war years she had also taught at Hinxton School.

Joan’s father Charles was a well-known bell ringer and friend of a young man called John Gipson. John called frequently to take Charles to ringing practice.  Joan and John were married in St Margaret’s Church, Newton on Boxing Day 1953 by Rev Sibson – Derek Sibson’s father. The bell ringing connection goes on and on!!!

Joan and John made their home in Meldreth. They moved into grandfather’s dilapidated cottages on the High Street next to Miss Hunter. Their cottage had been modernised: well, it had an inside tap and an Elsan loo! Their neighbours were Ann and Len Saunders.

In July 1954 Joan’s brother Albert was killed in an air accident. He worked for Handley Page the aircraft manufacturers and was an observer in a V bomber which crashed near Cranfield in Bedfordshire killing all the crew.  Joan was given much love and support from the village community and John’s sisters Muriel and Sylvia. Later, Joan cared for her parents who subsequently moved to a new bungalow in Elin way in the 1960’s.

If I said Joan became an active member of the community that might be an understatement! She was a member of the WI for over 50 years and served as its president during the 1980s. Joan was an accomplished needle woman and knitter and enjoyed drawn thread work and embroidery. Her hooded cardigans for babies were legendary in our family. She won many prizes at WI competitions for dressed dolls, embroidered dolly bags and drawn thread work tablecloths. She attended Mrs Jude’s famous embroidery classes for many years which she loved. Joan was also a loyal and dedicated member of the Mother’s Union from 1956. She was a Branch Leader and Deanery Leader.

Holy Trinity Church was the centre of Joan’s life. She ran the Sunday School for many years and organised trips and outings. She also started a Sunday school at Meldreth Manor School. She organised the church cleaning and flower rotas, often filling in when people had forgotten. She made coffee, she made cakes, she made jam. She was on the organising committee for the Church Fete and the Christmas Tree Festival.

Joan loved decorating the church at Easter and Christmas and for Harvest Festival and also took great pride in arranging wedding flowers.

The list of Joan’s roles within the Church is endless and included the following:

And in her spare time, Joan bought up three very different and at times very challenging daughters.

Joan and John were married for almost 62 years. They lived many of these years at 63 High Street which was always a hive of activity with something in or on the AGA, the telephone ringing and callers at the door.

Joan supported John not only with his garage business but also his many roles in the village and of course his bell ringing, organising ringers’ teas and supper on New Year’s Eve. Joan also cared for John’s sisters and brother in their later years.

Her eight grandchildren gave her endless happiness and her five great grandchildren brought a new meaning to her last few years. It was lovely that only five days before she died the youngest, Albert, named in memory of her brother, was born and we were able to share photographs of Albie with her.

Since Joan died, we have had wonderful messages from so many people both locally, nationally and as far away as Canada and the Far East. Joan was a constant in an ever changing world and she has touched so many people’s lives. All of our family would like to thank everyone from the church, local community and friends far and near who have supported Joan in her last years of incapacity.

I’d like to end with this thought: just being born is a miracle, to grow and make a difference in this wonderful world is grace indeed, but to live a life that touches others is amazing beyond compare.

[Terry’s words are shown in parenthesis].

And then I got involved with the Over Sixties or the Good Companions.  [Just tell me the difference between the Over Sixties and the Good Companions]. They’re the same group. They were called the Good Companions, but they are basically an over Sixties Club. [What was your role in that organisation?]. Well, it was started by Mrs Powell in 1959 and it celebrates their 50th anniversary this year. That’s right isn’t it? And Miss Bowen was involved in that and I’m not quite sure how I got roped in, but I did and I was involved in it for a long, long time and in the end I got fed up with it and I haven’t been involved for some 10 or 15 years now I suppose. [So, what did they do?  Did they have lunches and outings?] To start with they had about 70 members. They had a waiting list. You had to go on a waiting list. They used to have fortnightly meetings. They met in the Congregational Chapel. In the summer, every fortnight, they had an outing of some sort. We went to all kinds of places, stately homes, exhibitions, shopping trips, the seaside. You name it, they did it. I mean, it was remarkable really when you think of what a job it is to cart a load of old people. I was much younger then. [So did everyone pay a subscription?] 2/6 (12.5p) it was.

[So, were you the secretary when it started?], No, I think Mrs Adams, who lived in Whitecroft Road, I think, she was the secretary for a long time and Ethel Adcock, she was also very much involved and Rose Farnham, who was Jack Farnham’s mother, I think she was the treasurer. Of course, Mrs Powell and Maud Bowen.

But these outings were a nightmare, they really were [Tell me about them]. Well, the outings to the seaside. You wouldn’t believe this, but we used to take a complete picnic lunch. It was all loaded up into the back of the coach.  When I say a picnic lunch, I mean it was a ham salad, apple tarts and things. I can remember cooking 80 hard boiled eggs on one occasion. We usually went to Hunstanton, half way there the coach driver would pull off the road somewhere and everybody would get out and we’d get all this stuff out of the back and they’d have this picnic lunch and then it was all put back and off we’d go to Hunstanton.  And then, do you remember that there was a restaurant called the Kit-Kat at Hunstanton [Yes, I remember it] and we always had a fish and chip tea at the end. It was an absolute nightmare with all these old dears. Well, I say, I’m old myself now, but I wasn’t old then. [Would they all sort of wander off ?] Yes! And often they would be taken ill – I can remember going to a Butterfly Farm somewhere in Suffolk and one old lady was taken ill and was carted off to Bury St Edmunds Hospital and muggins went with her.   I had visions of getting stuck in Bury St Edmunds, but anyway, fortunately, she was alright, she came round and we were able to come back on the coach. [I see. So, what was the coach, a 30 seater?]. Probably bigger than that,  50 I should think. [Really?  ‘course,  you said you had 70 members at that time]. Yes, I had to draw lots to see who was going to go. I can’t remember how much they paid, about 7/6 (37.5p) I suppose, or something like that and they used to moan like anything that it was expensive!