Mary Findlay's Memories of The Red Cross and Wartime Concerts in the Village School (2min 15secs)
A transcription of this audio file can be found at the bottom of this page. 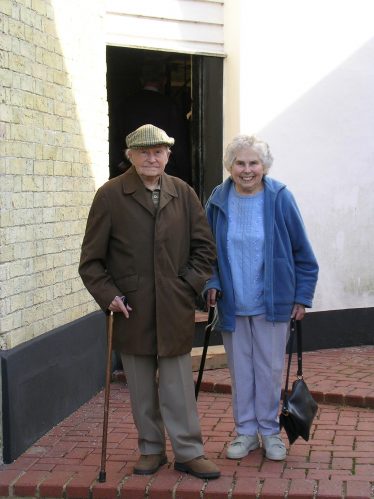 zoom
Mary with her brother Eric, pictured on a visit to Topcliffe Mill in 2007
Photograph by Kathryn Betts 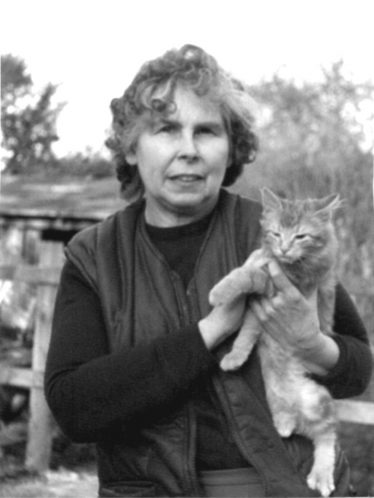 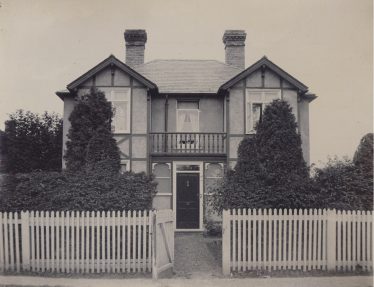 Grace Mary Findlay, always known as Mary, was born at Court Lodge in High Street, Meldreth, the youngest child of Edwin and Margaret Adcock; her father being the miller at Topcliffe’s meant a lot of her time was split between the two places, playing at the mill with her sister Gwen and brother Eric.

She attended St. Mary Convent in Royston and was very sad to see it pulled down in later years.

Many of her friends in the village, Mary Dainty, Gordon Handscombe, Den Pepper and Raymond Course, all grew up together and remained friends over the decades.

After taking shorthand and typing courses in Cambridge she assumed that a quiet office life would be in order, but on joining the Wrens as a writer she was sent to Norfolk House in London to work on Operation Overlord under Admiral Ramsey; meeting Monty and Eisenhower on several occasions. She went to Germany as part of the Allied Expeditionary Forces and ended up in Paris on VE Day. Life back in Meldreth after that must have seemed very quiet! She worked in Banham’s Solicitors and then moved to work with her sister Gwen at Kennedy’s Auctioneers, a job that would last almost 50 years on and off.

Mary met Don Findlay when he moved from London to lodge at Mrs Jude’s in Whitecroft Road whilst learning to be a draughtsman in Cambridge, introduced by Gordon Handscombe as they fettled their motorcycles.

Mary was married to Don in 1952 and they lived at Lodore Cottage in North End; eldest daughter Jane was born there and, when the council built houses on the meadow next to Court Lodge, they moved to 5 Bell Close; where Elizabeth and Alistair were born. In 1965 Mary’s aunt Grace decided Geneva House, opposite the stocks, was too big for her alone, so the family moved in.

Over the years it proved big enough for many animals and birds that all made their way to the front door for help and assistance; Mary always found time and space for them. I think 36 was the record at one point so all the family had endless feeding, exercising, etc. chores to do before we were fed!

After Don died several years ago, the house and garden were Mary’s hobby and joy and she vowed never to leave it, unless in a “box”. She got her wish aged 93 years, when she died peacefully in her sleep just a week after a tea party for friends to celebrate Raymond Course’s 92nd birthday.

In the Red Cross we used to do quite a lot because we were under Bassingbourn and if anything happened there we would have to go over there.  I remember one of the RAF officers coming and telling us that if we had to get people out of a plane where the best part was on the plane to get the people out quick, but thank God we never had to go because they never got it as bad as Duxford. I don’t know whether we were supposed to go to Duxford or not, but we were at Bassingbourn. You know, we used to have exercises at night and I can always remember going down there to pick up Mr Hale, the blacksmith. Now he was quite a thick set man and quite heavy, and I always remember there was Mrs Dainty, Hazel Simms and Mary and I and we had to carry him up on the stretcher from that meadow behind the Town House up to the school.  We were nearly on our knees! We had to bandage him up in the field. It was the hospital up at the school. We had to carry him up to the school. Yes, we had quite a few evenings out you know doing different things like that, which kept me going.

We used to have concerts. Mrs Lloyd who used to live at Orchard Dene, she was something to do with the theatre in London; she used to put these concerts on. What were they called, the ‘Meldreth Lovies’ I think I’ve got a thing in there about one of them.  Gordon used to play the accordion. [Terry asks if they were held in the house or grounds.] No in the school they used to hold them, the evening performances and that. And then we had the Services came down one day like George Black and his soldiers that acted in the War and that, and they came and put on a show down there with us and it was quite good – yes.   We used to do quite a lot of different things like that.