You are here: HomenextPeoplenextObituariesnextAlec Yates 1922-2012

Click on the play button to hear Joyce and Alec talking about Cam Cottages during an interview with Terry Dash in June 2009. (52 seconds)
A transcription of the clip can be read at the bottom of this page.
Tim Gane 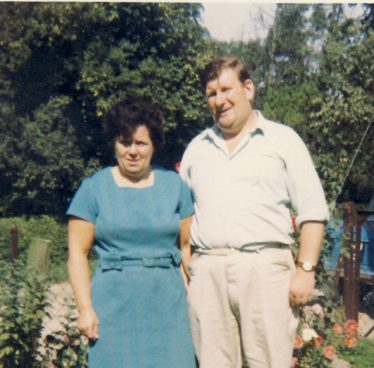 Alec and Joyce were married in 1944 and moved to Cam Cottages where they raised six children, five girls and a boy.  Alec worked at the Whiting Company in Water Lane, Melbourn, before joining the Atlas Stone Company on the loading gang.  He also drove a 10 ton Bedford lorry delivering asbestos all over the country, including many trips to Wales.  Alex said the best thing about going to Wales was the M4 which took him away from there!

Alec was a keen gardener and had an allotment in Malton Lane.  His close friend was Tommy Jude and Alec recalled happy days ferreting for rabbits at Cam Farm pits.  They used to cycle to Cambridge to watch Cambridge City play football at Milton Road.  Alec and the family used to take regular holidays in Devon which Alec enjoyed as he was a Devon man, having been brought up in Budleigh Salterton.  Alec was a keen fisherman and he also enjoyed going on coach outings with Joyce.  These were organised for the villagers by Ethel Adcock.

In June 2009 I interviewed Alec for Meldreth Local History Group and he told me that retirement came hard for him as he missed his workmates.  He took gardening jobs to keep himself busy, and he and Joyce moved to a bungalow in Bramley Avenue, Melbourn, although their hearts remained in Meldreth.

Alec was a wonderful family man and he had an abundance of funny stories to tell, some of which he recounted in his interview with me.  I will remember him with affection.

You can hear Joyce and Alec reminiscing about Cam Cottages in the audio clip on the top of this page.  A transcription of the clip is given below:

There were four cottages when we moved in but they knocked two into one for us. We had two bedrooms, one big one and one small one at the top of the stairs.  We had an outside toilet and we had to go down to Courses’ down the road to get the water.  We’d got no running water and no electric not at the time, we had paraffin lamps. “Oh dear oh dear!”.  The lamps’ glass would break if you opened the door and a cold wind come in. (Laughter)