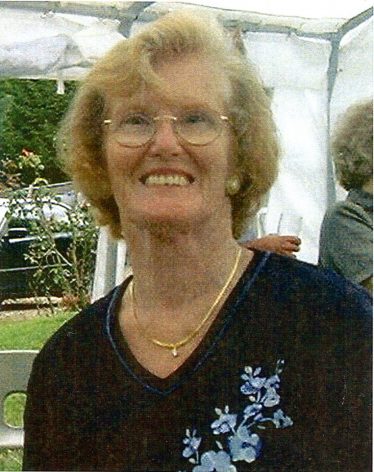 The following obituary appeared in the February 2006 issue of Meldreth Matters.

Pat’s links to Melbourn were forged during her secondary education at Hawnes Boarding School in Bedfordshire, by her friendship with Jill Elbourn.  This eventually led to her marriage to Jill’s brother Robert in 1957.  Married life started in Whitecroft Road where a bungalow was built in one of the orchards belonging to Robert’s family.  She was actively involved in the fruit-growing business and a driving force behind the Elbourn Apples farm shop in Whitecroft Road, which was one of the first in Cambridgeshire.

Pat and her mother Betty were founder members of the Royston R.N.L.I. branch during the 1960’s and Pat was actively involved with it until her death.  During the 1990s she worked as Secretary for the Cambridgeshire Society for the Blind and the Guide Dogs Association.  This led to voluntary work with blind people at a local level in Meldreth and Melbourn and the visually impaired craft club in Cambridge.  She was also involved with the Triggs Trust, Meldreth Mobile Warden Scheme, the Village Hall Committee and several years on the Parish Council.  Pat was also a committee member for Cambridge Council for Voluntary Services and the Care Network which help to co-ordinate a range of local charities.

Pat died peacefully in the early morning of 12th January.  She leaves her husband Robert, sons Chris and Tim, daughter Kate and eight grandchildren.  She will be sorely missed by both family and friends.