You are here: HomenextPeoplenextObituariesnextAnne Saunders 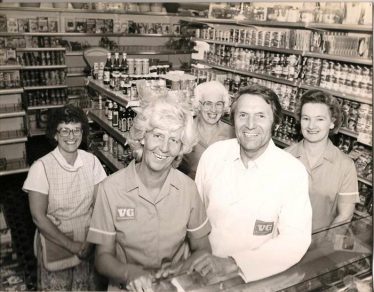 zoom
Mr and Mrs Hardwick and staff at the opening of VG Stores in 1975. Anne is on the right of the picture.
Photograph supplied by Ann Handscombe

The following appeared in the May 2007 issue of Meldreth Matters.

It was with much sadness that we heard of the death in early April of Anne Saunders.  Anne had worked in the village shop for nearly 30 years.  She was a friendly, kind and helpful lady who will be missed by us all.  We wish to extend our sincere sympathy to her husband Len, her son, daughters, grandchildren and the other members of her family.

I first met Anne during the summer of 1955 when she came to live in Meldreth following her marriage to Len.

Anne came from Yorkshire, the second child of a family of seven children.  She and Len had met during his time stationed in Ripon while serving his two years National Service between 1949 and 1951.  After being demobbed Len found employment as a motor mechanic and in June 1955 came to work at the Melbourn’s South Cambs Motors garage then owned by Bill Dash.

Len and Anne were to marry in August of that year and needed to find accommodation.  Housing at that time was extremely difficult. Only a few couples could afford to buy.  The only other option was to rent or stay living with parents until they qualified to be housed by the Council.  By chance Len had the opportunity to rent a cottage in the High Street near to the Primary School; it was one in a row of four terraced cottages. Having been used to ‘mod cons’ at her family home I wonder what Anne thought when she first saw her new home.  The landlord had wired the cottage for electricity prior to their arrival and water was available – a cold tap outside! To dispose of household water, Len tells me, buckets were necessary.

The following year Keith was born, and I also had a new daughter, Julie.  We lived nearly opposite, next door to the Old Post Office. Anne and Len’s next door neighbours on one side were Joan and John Gipson who also had a daughter.  Other neighbours were Mr Wright, father of Dorothy Pepper and Mr & Mrs Farnham, grandparents of Jack.  Of course there was no nursery or pre-school provision but we would occasionally meet socially with other young mothers or attend village functions together, including Sunday School on Sunday afternoons.  Anne soon made friends.  Jennifer was born in 1959, and in 1960 Anne and Len were delighted to be allocated a house in Kneesworth Road (now known as West Way).  In 1961 Linda arrived to complete the family of which Anne was justifiably proud.

To boost the family income while the children were young Anne began fruit picking and she asked me if I would like to join her at “The Mash” near the stocks in the centre of the village, which at that time was one of the large orchards of mixed fruit trees in the area.  Anne showed me the ladder, gave me a basket with a hook, and said we were on piece work!  I gradually climbed up after checking the ladder was secure and began picking apples.  Anne soon showed she was an expert and very quickly filled and emptied her baskets into the boxes provided.  When she had filled about ten I was only on my third!  While Anne was using both hands to pick the fruit I was only using one – the other was holding tight to the ladder!  No Health & Safety Officer or ladder licence in those days!

As the orchards disappeared and their children grew older Anne was employed in the local shop and very quickly gained the respect of her employers.  She was always reliable, very hard working, had a keen sense of humour, took an interest in the customers and became very knowledgeable about the retail trade. When Anne was serving you knew you would always get a friendly greeting and excellent service.

As I share Anne’s Christian name, whenever we met the greeting was like an echo, as we said “Hello Anne” to each other.  The last time I saw her, which happened to be on the last morning she served in the shop, although feeling very unwell, the greeting was still cheerful and as I left we both said “Goodbye Anne” to each other.  We will all miss her friendliness and I will always remember her with affection.