You are here: HomenextPeoplenextObituariesnextBill Wing 1922 - 2010 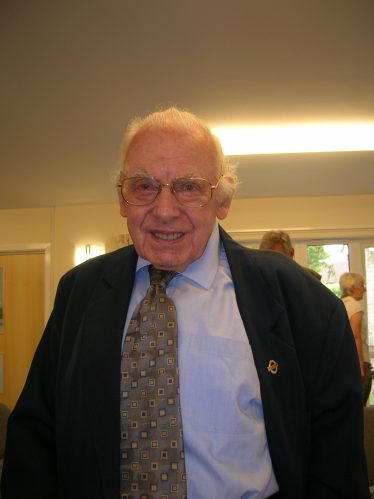 This is an edited version of the obituary that appeared in the November 2010 issue of Meldreth Matters.

Bill was born in a small cottage in Rose Lane, Melbourn on 30th January 1922. He lived there for several years with his parents and his two sisters, Violet and Joan, before the family moved to a small cottage at Valley Farm, Meldreth where his father worked as a cowman for Abbis Worland. A third sister, Jean, was born in 1933.  (Jill died in 1969, aged 36.) In the early 1930s, the family moved to the new council houses in West Way.

From January 1929, Bill attended Meldreth Primary School (having previously attended school in Melbourn). When he was thirteen, he worked for Vernie Hart each Saturday and would take a herd of Jersey cows along the Kneesworth Road for grazing before returning them later in the day. Bill left school in April 1936, at the age of 14, and began work for the Atlas Stone Company.

One morning, when Bill was cycling to work in 1939, fighter planes flew overhead and some spent cartridge cases dropped onto the road. At 9.00 am that day, without a word to anyone, he left work and cycled to Cambridge where he joined the army. He was 17½ years old. That evening, he broke the news to his mother that he would be going to Ipswich for training the following morning.

It was in 1941, whilst he was stationed at Wattisham Aerodrome, that Bill met Joyce and they began courting. Bill would think nothing of walking the seven mile round trip to Joyce’s house several times a week. Later, the couple regularly cycled on a tandem from Stowmarket to visit Bill’s family in Meldreth. The journey used to take them about 4½ hours.

Joyce and Bill married in 1943, but spent some time apart due to Bill’s army service. He served in the Royal Tank Regiment and spent time in England, Italy and Greece before being demobbed at the end of 1946. In 1955 Joyce and Bill left their one-up, one-down cottage in Suffolk and moved to live in a newly-built council house in Bell Close, Meldreth with their two young sons, Brian and Kenneth. They remained in the same house until earlier this year. Bill returned to work at the Atlas, where he worked on the loading gang, the maintenance gang, in the drying shed and, for 19 years, as a fork lift truck driver. He retired in 1984 and then gardened for Keith and Tessa Humphreys at College Farm for the next 20 years.

In recent years, Bill always made a point of attending the Meldreth Local History Group coffee mornings, which he loved. It was a chance for him to socialise with old friends and provided an opportunity for those of us who are relatively new to the village to meet Bill and to listen to and learn from his memories and experiences. He was a loyal supporter of the History Group and always willing to help us with material if he could.

In 1993, at the age of 99, Bill’s father, “Old Bill” was interviewed about his life and his memories of Meldreth. In 2007, Bill himself followed suit when Joan Gane and Terry Dash interviewed him and his wife Joyce as part of Meldreth Local History Group’s oral history program. The resulting recording of that interview lasts for over two hours and in it, Bill talks of his life and his memories of the village. He speaks of his exploits as a child when he should have been at school (best not repeated here!), his army service, his time working for the Atlas Stone Company, and his courtship and subsequent marriage to Joyce. It is a wonderful, and at times very amusing, record of his life.

With his death, Meldreth has lost one of its real characters. But thankfully, Bill’s story and memories have been preserved for generations to come.

Our thoughts are with Joyce, Kenneth and his family at this time.