You are here: HomenextPeoplenextObituariesnextDorothy Brown 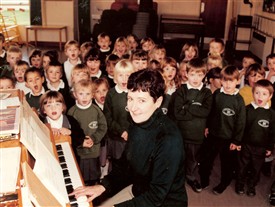 The following obituary first appeared in the June 2012 edition of Meldreth Matters.

We have been greatly saddened by the news of the death of Dorothy Brown who was head teacher at the school from 1988 to 2000.  Dorothy died on Saturday  5 May after a period of ill health and will be very fondly remembered by all who worked with her, as well as those children who attended the school during her tenure and their parents.

Dorothy was a passionate educationalist who always wanted absolutely the very best for and from the children of Meldreth.  She led the school during a period of much change and upheaval in educational policy in Britain, and implemented the new literacy and numeracy strategies in school.  But Dorothy was predominantly driven by the children themselves, determined that all would succeed in whatever area their interest of skills lay. Her overriding passion was for music and she oversaw a golden age for music at the school, leading a large and enthusiastic choir, an equally extensive and diverse recorder group and an orchestra incorporating strings, brass, woodwind and percussion – no mean feat for a small village school.

In 1997 she played the piano for seven hours in a sponsored piano play, raising £1,600 for school funds.  Children went in between lessons to sing along.

Dorothy led the school into the new millennium, the same year that the school celebrated its 90th birthday; before retiring in July 2000.  Her final entry in the school log book reflects her unswerving affection for the school:

“As I take my retirement from Meldreth School after twelve years and a term, I feel both overwhelmed and humbled by the kindness and generosity shown to me.  This has been a turbulent time in education but I have been privileged to work with some dedicated professionals and excellent support staff.  The school has enjoyed wonderful support from the governors and PTA over the years.

Meldreth will always have a special place in my heart and I leave with very best wishes to everyone concerned for the future success of the school.”

Our thoughts are very much with Dorothy’s husband, Michael, their sons and grandchildren, at this time.