You are here: HomenextPeoplenextObituariesnextFred Dye 1931 - 2013 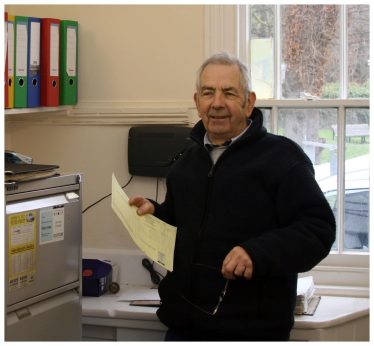 The following obituary first appeared in the November 2013 issue of Meldreth Matters.

Fred was born in Lincoln in 1931, brought up in a horse racing family and was astride racehorses when he was twelve years old. He worked as a secretary to the trainer Tom Waugh in Newmarket where he met Dawn who was riding out for Ryan Jarvis. They married in 1960 and moved to Chiswick End, Meldreth in 1967.

Fred was an active sportsman and liked to play tennis, go swimming and roller-skating. He was also a keen gardener. However, his main interest in life revolved around horses. He took part in show jumping, competing against such luminaries as David Broome and Harvey Smith, three day eventing, point to point and dressage. Fred was an excellent judge of a horse and helped many young riders in their careers. One of Fred’s horses went to France in 1998 as part of the British Team. Closer to home Fred helped to teach the Cambridgeshire Pony Club riders at Meldreth Manor School in the late nineties.

Fred was a familiar sight on horseback around the Meldreth/Melbourn area and also on his favourite beach at Holme-next-the-Sea in Norfolk. This ended in 2011 when he was thrown off his horse George and the headlines in the local paper read, “Elderly gentleman airlifted to Queen Elizabeth Hospital.” Needless to say Fred was back to work, on crutches, in three weeks. Fred always said most of the bones in his body had been broken or cracked at some time in his career but it was all part of the game. He once set off the alarm at Tesco’s with all his metal pins! On his eightieth birthday Fred went gliding at Gransden airfield and took over the controls for nearly an hour.

Fred worked in the office at South Cambs Motors in Melbourn (now no longer in existence), which was owned by the Dash family, for 46 years. He was renowned for his meticulous bookkeeping and his willingness to chat to customers, especially if they were interested in horses. One of his favourite expressions to customers as they handed over their money for their bill was, “That’s your pocket money gone for the week.”

We will all have personal memories of Fred, mine is that he was a master horseman.

Dawn would like to thank everyone, especially the people in Chiswick End, for their sympathy cards and kind words.