You are here: HomenextPeoplenextObituariesnextJackie Gelling 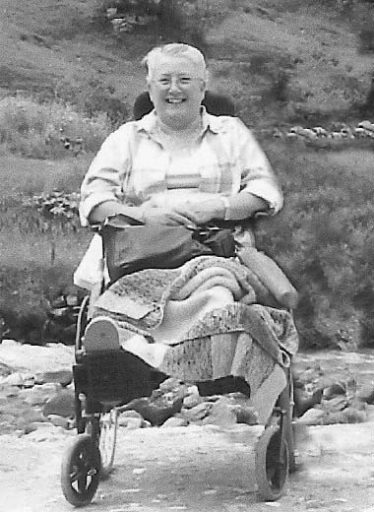 The following obituary first appeared in the September 2007 issue of Meldreth Matters.

The Meldreth Matters team was deeply saddened to hear of the passing of Jackie Gelling on 24th July. As a tireless member of the Meldreth Matters team, Jackie Gelling was a woman of substance. Jackie demonstrated on a daily basis that it is your state of mind and not your circumstances that determine your happiness. Jackie was dealt a difficult hand in life, but she rose above this to make her mark in the village.

Throughout her life, Jackie was committed to providing a service to others in many different ways. She was particularly devoted to causes helping others in her situation.

Jackie was a trained nurse and was involved in training nurse cadets when her husband, Joe, was posted to Singapore. On their return to England she ran a Cub Scout pack at the church hall in Royston, until ill health prevented her from continuing. She then served on the Community Health Council, where she did a lot of work for the Disability Group. Jackie was for many years on the committee for Crossroads Care and right up to the last weeks of her life she was fundraising for ACROSS, an organisation that would take her to Lourdes, which she loved. Sadly Jackie was booked to go this month and wasn’t able to make that final journey.

Jackie and Joe first joined the Meldreth Matters team in 1995. As important members of the team they provided a reliable and quality service for many years. With Joe as the Editor, Jackie took care of the layout and was a positive influence on the magazine, being a key player in ensuring its continued expansion and progress. Over the years we have all experienced the improvements that Jackie made. The magazine tripled in size, the preparation methods were changed to encompass the advances available in publication and the layout enhanced; all to the greater benefit of the village. All this was done selflessly as a service and consideration to her fellow villagers; the only reward being the knowledge of a job well done.

In later years Jackie started to experience greater difficulty, as dialysis took its toll, and sadly in 2004 had to make the heart-breaking decision to relinquish her duties with Meldreth Matters. The rest of the Meldreth Matters team then experienced the enormity of the task of preparing the magazine for publication. This made the exemplary effort that Jackie put forth, each and every month for many years, all the clearer to us.

Our thoughts are with Joe and his family at this sad time. Jackie will be much missed but we must continue to remember the life and presence that she brought to the world and recognise the courage and determination she put forth to provide a dedicated service to the cause of her community.

Jackie has gone from our physical lives but she will always remain in our hearts and minds as a part of the history and life of Meldreth Matters and of Meldreth itself.