You are here: HomenextPeoplenextObituariesnextJo Rathbone 1916 - 2007 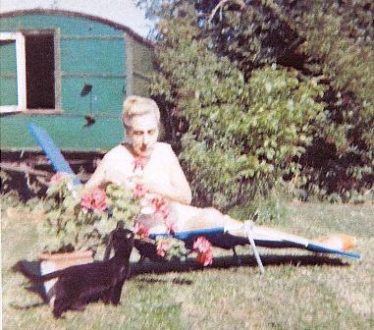 The following obituary first appeared in the July 2007 issue of Meldreth Matters.

Our mother was born Josephine Edith Erica Minette in Leicester in 1916.

As a very young child she had to face the death of her mother and found solace visiting her grandparents’ farm in Gloucestershire, where she developed a lifelong passion for animals. Her formidable will was demonstrated by repeating, “I want a dog, I want a dog”, every day until her father gave her one.

She attended the Leicester Collegiate School for Girls, where she excelled, discovering a love of Shakespeare, the theatre and poetry.

At the University of Liverpool she gained a first class Honours degree in English and met the man she was to marry. Then war broke out and Ronald joined the Royal Engineers. As she could not take up the research bursary that was offered, her life took her to Farnborough to teach in a convent, which she left to have her first child Nikola.

When Ronald was demobbed the family moved first to Cardiff and then to Royston, when her husband took up a post at Cambridge University. Her second daughter, Hilary, was born, and in 1955 they moved to Meldreth where they bought and renovated an abandoned farmhouse.

When our mother’s marriage failed she had to overcome huge difficulties and support her children on her own. This led her to teaching at Meldreth Primary School from about 1957 to 1964, where she touched the lives of many children; her inspiration gaining her great respect.

She then taught at Meldreth Manor School, from when it opened in around 1964. It was the first school of its kind and Jo specialised in working in the field of visual impairment, with sometimes amazing results.

After her retirement she took up voluntary work as a guide at Wimpole Hall, which gave her a lot of pleasure.

Fiercely independent, she lived on her own for many years, until she moved to live with her daughter Nikola in Birmingham. Increasing frailty brought her to live at Neville Williams House, a nursing home nearby.

Josephine’s extraordinary talents will long be remembered. Formidable in adversity, pure devotion to those less fortunate and a presence which eclipsed others, she will remain in our hearts and minds as a person of amazing strength and courage.