You are here: HomenextPeoplenextObituariesnextJohn Chalkley 1932 - 2012 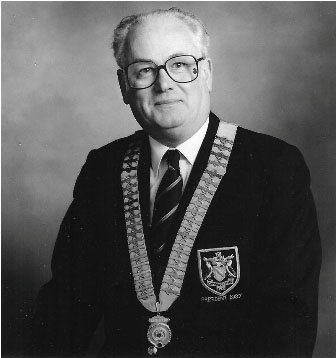 The following obituary first appeared in the April 2012 issue of Meldreth Matters.

John was born in Winchmore Hill into a family who had been bakers for over 200 years.  He attended Southgate County Grammar School and Borough Polytechnic Bakery College and having joined the Scout Movement, became a Rover Scout.

John’s first job was with the Unilever Research Bakery.  National Service intervened.  His background resulted in him becoming his Station Commander’s personal cook, described by John as a ‘cushy number’.  Romance was in the air and having met Barbara at the local church youth club they were married in 1955.  Two years later daughter Alison was born.

At a well attended Thanksgiving Service held in Holy Trinity Church, conducted by Mrs Marion Long, the eulogy was presented by Mr Roger Murphy.  He told the congregation that he first met John when they were 13 years of age and recounted daily cycle journeys to school with his ‘quick witted amusing friend’, characteristics which had remained with John throughout his life.  Mr Murphy also recalled his delight when he was asked to be best man at Barbara and John’s wedding.

The Chalkley family moved to Meldreth in 1962 and initially lived in The Grange before moving to North End, not far from the bowls club which was to become an important part of John’s life.  In addition to spells as President of Meldreth Bowls Club, in 1987 John brought honour to the Meldreth Club when he was elected President of Cambs. County Bowling Association.  But he also found time to take part in other village activities including leading the village Cub Scouts.

After a serious heart attack in 1989 John underwent a triple heart by-pass operation in Papworth Hospital.  It was while recovering at Papworth that John became aware of the Zippers Association, a group of people who qualified for membership by sporting a zip like scar on their chests, resulting from the surgery which they had undergone.  Subsequently, in 1996 the Zippers Bowling Association was formed.  John was its first national secretary and was instrumental in writing the club’s constitution.  The objective of the club was to raise money and donate it to coronary care units as a way of saying ‘thank you’ for being given a ‘second chance’.  The money is raised by Zippers bowlers playing charity matches at clubs throughout the country:  to date a sum in excess of £150,000 has been raised.