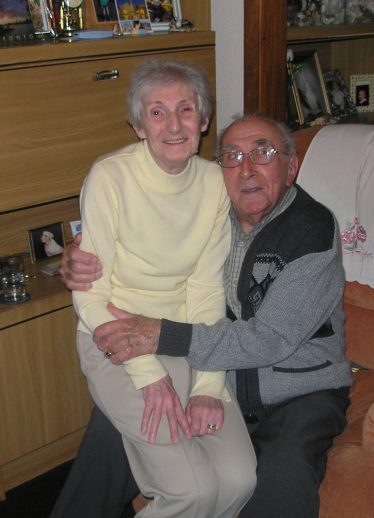 zoom
Joyce and Eric pictured in 2008 when they were interviewed by Meldreth Local History Group.
Photo supplied by Joan Gane

The following obituary first appeared in the July 2012 edition of Meldreth Matters.

Tributes to Joyce and Eric Walbey

Joyce Walbey died on 16th May, Eric, her husband of almost 65 years, died just two weeks later on 30th May, the day after Joyce’s funeral.

My first memories of Joyce are of her bustling between the tables as a waitress at the Flint Cross Restaurant.  Years later when we worked together at Owen North’s bakers shop in Melbourn she told me of the many jockeys and trainers that came to eat at the restaurant as they passed through to Newmarket.  Joyce even named one of her cats, JoJo, after a jockey.

Joyce was never happier than when she was serving the public.  Whilst we worked together the bypass was being constructed and we were really busy with the workmen coming in for their breakfast and lunch.  Joyce would banter with them and laugh and joke.  One day though, one of the girls in the shop turned up in a really short mini dress.  Joyce turned to me and said “Linda you are going to have to send her home to change, I can’t work with that all day, it’s making me feel sick.”  Needless to say I did as Joyce asked.  I would rather have upset the girl than Joyce.

I have known Joyce for about 40 years and my mum knew Joyce for nearly 70.  Joyce went to mum’s wedding reception at the Rose Pub in Melbourn in 1944 and they worked together at the Atlas Stone Company.

Joyce’s great love was animals.  There was a litter of four kittens in Melbourn and so we each took two home.

Joyce would never forget a birthday or anniversary, sending cards to my daughters, all the grandchildren and to me.

When my husband had his accident Joyce and Eric were soon round to offer words of comfort and Eric would cut my grass for me.

Last year in March Joyce fell and broke her hip.  She was never the same again.  After spending two weeks in hospital Eric looked after her at home with nurses coming in at a later stage.

I miss you Joyce but I hope you are now at peace with your brother George.

I never dreamt I would be writing this so soon after Joyce passed away.

I remember Eric driving his burgundy coloured lorry for Bill Dash with his dog sitting upright beside him..  Eric recently told me that this was Ted who he had found wandering at the Flint Cross.  He took him home and Ted became a faithful companion, travelling many miles with Eric.

After Joyce went into hospital with her broken hip I became very close to Eric, giving him a bit of support when he needed it.  They were both proud and very independent.

Eric was a placid, inoffensive and trusting man and when he was conned out of several hundred pounds on two occasions last year I was devastated for both him and Joyce.  I clearly remember Eric’s words, “there’s no fool like an old fool” saying also that the conman was bigger than him and frightened him.

Eric looked after Joyce at home for 13 months when she came out of hospital.  He coped really well until recently when it got too much for him.  He was becoming frail.

He drove his little car up until a few weeks before he passed away – only to go to the shop though.

Eric wrote poetry.  Every year he would write a verse in Mrs Dash’s birthday card.  I have also got one that Eric wrote to me about bowls, it is very witty and funny.

Sadly Eric never got to his 90th birthday in August.  Joyce and Eric would have been married 65 years in September.

Eric was a true gentleman and I will never forget him.

I have known Eric for most of my life as he started work for my father in 1949 when I was seven years old and continued to do so until his retirement.

Eric had two brothers, Albert and Arthur and three sisters, Ethel, Violet and Alice and they lived in a cottage next to Valley Farm.  They stayed there for nine years before moving to 7 Kneesworth Road (now West Way).  Eric spent all his school years at Meldreth School where Grace Butler was his head teacher.  Around this time he became great friends with Gordon Handscombe and they became inseparable.  They both shared a love of music and motorbikes.  Eric learnt to play the mouth organ, the accordion and finally the saxophone, all self-taught.  Eric left school in 1936 and worked at the Atlas Stone Company before joining the Army in 1942 where he served in Italy.

Back in Meldreth after the War, Eric joined the Church choir under Mr Dainty and became a member of Gordon Handscombe’s band which was much in demand at village dances.  He met Joyce at a dance in Arrington and they married in 1947 and lived in Wimpole Park until they moved to Howard Road in 1952.  Eric was a keen footballer and played in Meldreth.  Among his team mates were Harry Jude, Rodney Plumb, Mervyn Carnell-Thurley, Don Chinnery, John and Bernard Howell and Ken Waldock.  When Eric was 39 Joyce put his boots in the dustbin to stop him playing but Eric retrieved them and played another season!  Eric and Joyce became avid Tottenham Hotspur supporters with Danny Blanchflower being a particular favourite player.  In later years Joyce surprisingly changed her allegiance to Crystal Palace, much to Eric’s dismay.

Eric worked for 38 years as a lorry driver, mainly delivering fertiliser to farms.  He was a loyal and considerate man who always gave of his best.  On retirement he helped out at Westacre and after the death of my father, became a great friend and support to Vickie Dash.  They shared a common love of animals, football and a strange game called rummy cup.  Eric had a natural gift for writing poetry, although being the modest man he was, he never mentioned it.

I will remember Eric and Joyce with great affection.  They were always there, mostly in the background, but you could always count on them for help or information.  They were good friends of the Dash family and many others in Meldreth.

You can hear Eric speaking about his memories of Meldreth School on this website.

Below is a poem Eric wrote for Mrs Dash, for whom he worked for many years.

To all God’s creatures you are kind

Happiness with you they find

Never do you turn away

Anything that is a stray

Food and shelter you provide

Your door is always open wide

Fur or feather, strong or weak

Westacre is the place they seek