You are here: HomenextPeoplenextObituariesnextMary Course 1927-2007 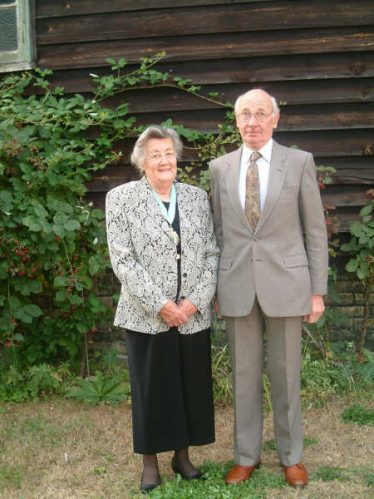 Mary Course died suddenly on 18th January 2007.  The Service of Thanksgiving held in Holy Trinity Church, Meldreth on Monday 29th January 2007 was attended by approximately 350 people: a testament to the high regard in which Mary was held.

The following tributes to Mary appeared in the March 2007 issue of Meldreth Matters.

She also represented the Council on the Cambridge and County Folk Museum and the Farmland Museum at Denny Abbey.  I’m told she used to arrive at meetings with a large brown paper bag from which she would draw an object, a mystery object, and say, “Now what do you think that is?”  The one occasion that stuck in the minds of my informants was the time she produced from that bag a chastity belt!

Mary was a good councillor, conscientious and thorough in what she did.  She took a motherly interest in new and younger members helping them find their feet, but even the young could not persuade her to use a computer.  It was not wise to mention the word “email” in her company.  She knew that the best way to communicate was face to face and not at the click of a button. She could be cross, yes, but it was only for things that needed being cross about and all was done with courtesy and consideration.

I am so glad she lived to see the opening of the new sports facilities at Melbourn.  She had worked so hard to achieve them in the face of delays and lack of money.  She didn’t give up. She gave the push and kept on pushing.  She had been involved with McSplash right from the very start as a foundation trustee.  All those Melbourn facilities will be a fitting memorial to her.

But it was Meldreth that came first. There are many people in Meldreth who owe her a great deal. Mary was a good lady who is fondly remembered at the District Council. She will be greatly missed.

Many of us have been fortunate enough to have worked alongside Mary and gained much from her wisdom, humour, historical knowledge, and understanding of how things ‘ticked’ in village life.  A few years ago someone said to me “this village owes so much to Mary – much of what she does is carried out quietly and behind the scenes”.   I am glad I was afforded the opportunity to repeat this sentiment to her just a few weeks before she died.

Resistant to modern forms of communication, especially emails(!), Mary’s philosophy was “you need to talk to people” and this she did, speaking out knowing that others may not necessarily be receptive to her views but at the same time respecting the opinion of others.

To Raymond and the family: Mary will always be remembered for her support and commitment to the village over many years.

Mary was the kind of councillor who kept an eye out for literally everyone who lived in the village.

She would keep track of ‘For Sale’ and ‘Sold’ signs and be there on moving day to greet the new resident, armed with sheets of useful information all designed to give the newcomer a head start at getting settled in a new community.  That is how I met her, twelve years ago, on my first day in Meldreth, a village where there is no such thing as waiting thirty years to be accepted as a local.

While Mary appeared to be out and about in the village doing things for other people all the time, she was first and foremost devoted to her family.  She worried about the world being a good place for her grandchildren to grow up in.  It was obvious to the outsider that her family in turn worshipped her.  It was not uncommon to witness her husband Raymond get a good scolding from Mary, and it was always the kind of affectionate scolding that had something to do with his wellbeing.

Mary refused to join the IT age and eventually was one of the few district councillors to do her job without a computer.  She used to shudder at the word ‘email’.  This I’m sure was one of her secrets of success, and a reason why she managed to be one of this council’s longest serving members – a record of which she was very proud.

I always noticed with Mary, that for all the ways in which we were different, it was the commonalities that seemed to stand out, and that she drew out.  She was a great talker, but also a listener.  I was amazed to learn after knowing her for a long time that we had both spent parts of our childhood in Egypt – she for six years as the daughter of an RAF man.  Characteristically, her reminiscences were affectionate, and even so many decades later marked by detail and a feeling for the place and the people who lived there.

Mary had a style all her own and shoes that couldn’t possibly be filled: her amazing reservoir of local knowledge, her awareness of people in all corners of the village with particular needs that she made sure to see to, and her total dedication to service.  She once told me that it was no accident that her initials were MPC, which also stood for Meldreth Parish Council.  She said, “You see, we were destined for each other!”

Mary followed her heart in everything she did, and I count myself as one of the many people lucky enough to have known her.

Mary was a committed member of Meldreth WI for more than forty years.  She had a love of life and was always ready to take part and “have a go” at all the WI could offer.  She made many friends throughout the County and beyond.  Her knowledge of the WI, her good humour, her friendship and her valued opinions were well respected.

Her passion was her needlecraft.  Over the years Mary had produced some beautiful pieces of Blackwork, one of which hangs in the Cambridge room at Denman College.  Mary served on our committee for more than thirty years and will leave a great void. We will miss her very much.

When Mary died suddenly and unexpectedly on 18th January, seven months before her 80th birthday, Meldreth lost a person who will be impossible to replace.  Her devotion to, and love of this village was apparent in her tireless work on behalf of us all. She was a typical example of ‘if you want something done, ask a busy person’.  Her knowledge of Meldreth and its history was invaluable.  The answer to most questions was simple: ‘Ask Mary’.  And what Mary didn’t know, she knew how to find out and did so with much energy and enthusiasm.  She never minded ruffling feathers, which illustrated her independence and determination to do what was best for the village and the people that live in it, rather than for self-recognition.

When standing as an Independent candidate in the District Council elections, she said, ‘I stand for people not politics’.  This statement was borne out by many acts of kindness, most of which went unrecorded.  Few will realise the extent of all that she did for Meldreth, the people of Meldreth and for every organisation she supported.  It was often said that we would not know all that she had done until she was no longer there to do it.

I first met Mary when I became Parish Clerk in the mid 1980s.  I am glad to have had the privilege of knowing this lady who was kind, generous with her time, capable, gifted with her hands (she stitched and embroidered with great skill) and who had become a very good friend.  Her husband Raymond, daughter Cilla, son Ian, grandsons Edward and William, brothers David and Peter and the other members of the family she leaves behind can surely take comfort from the fact that she has left an indelible mark on this village and she will not be forgotten.