You are here: HomenextPeoplenextObituariesnextTom Jude 1914 - 2007 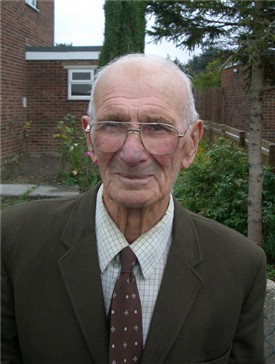 The following obituary first appeared in the January 2008 issue of Meldreth Matters.

Many readers will be aware that, very sadly, Tom Jude died on 12th December.

Tom was born in Orwell in 1914 and attended the village school. There has always been some confusion about Tom’s christian name. He was christened Arthur Herbert Frank. His mother always called him Frank to avoid confusion with other family members. However, after service in the army he was called ‘Tommy’ Jude.

After leaving school Tom worked at Saints Garage in Cambridge, making the return journey by bicycle from Orwell, before commencing work for Bill Dash as a lorry driver.

In 1938 Tom married Dorothea, who came from Arrington, and they started their married life in a cottage at Cam Farm. John Gipson recalls first meeting Tom in 1939 and has memories of a wiry young man who appeared to be capable of achieving any physical task. An example of this had occurred on Tom’s wedding day. On the previous day his employer told Tom that the next day a load of beans had to be collected from a farm in Orwell and delivered to Biggleswade. Tom reminded Bill Dash that he was getting married on that day and would prefer it if someone else did the job. But nobody else was available, so Tom did the job in the morning and was married to Dorothea in the afternoon. In those days beans were transported in 4 bushel sacks which weighed 19 stones!

Tom joined the Army, where he drove tank transporters in France and Germany. After the war Tom resumed his employment with Bill Dash. In 1957 Tom and his family moved to Whitecroft Road, where he lived for the rest of his life.

In 1979 Tom retired, aged 65, and started a new career as a jobbing gardener. His clients included Mr and Mrs Braggins, whose garden he tended for nearly 30 years. Mrs Braggins recalls how upset Tom was when they decided to stop growing vegetables. Until recently he was still regularly visiting the garden to check that standards were being maintained!

As a young man Tom was a well known local footballer. Later in life he became a prominent member of Meldreth Bowls Club, where when over 90 years of age he could be found carrying out day to day maintenance work. In recognition of his services to the Club, Tom was made an Honorary Life Member. He was very proud to have his name displayed on the club honours board. Although admitting to the club Captain that he was ‘probably past his best’, he played his last match for Meldreth against Saffron Walden on 30th September 2007, aged 93!

Tom was a village character who will be sorely missed by the many people who knew and loved him. The Meldreth Matters Team extend their sympathy to Tom’s wife Dorothea, daughter Trudy, and other members of his family.

This tribute first appeared in the February 2008 issue of Meldreth Matters.

We were very pleased that you included an article on Tom Jude, known to us as Frank, in the January edition of Meldreth Matters as indeed he was a person who mattered to all who knew him.

We were all very sad when he died so tragically. Frank to us was a devoted husband who visited his wife Dorothea several times a week in Maycroft. Frank cycled with a carrier bag in his basket containing fruit and chocolate for Dorothea. No matter what the weather, Frank would visit. Sometimes he would comment on how windy it was and admitted he had to get off his bike and push it. Sometimes he arrived looking worn out and we would ask, “When are you giving that old bike up?” Frank would say, “If my old legs would let me walk this far I would.” Sadly, for some time Dorothea was unable to have a conversation with Frank, but her face lit up each time he came, which said it all. He would sit and hold her hand and feed her chocolate and chat to her. Frank enjoyed his visit to Maycroft where, apart from seeing Dorothea, he would look forward to his cup of tea and a chat with the staff.

This year Frank and Dorothea would have been married for seventy years. I asked him quite recently what had been the secret to such a long marriage, and he replied, “Keep the wife in her place and me in mine and you’ll never have a reason to fall out.”

Whilst we continue to love and watch over Dorothea, we know who is now watching over Frank. May he rest in peace.

Ken McLean and including a tribute by Joan Ogden, Manager of Maycroft Residential Home