You are here: HomenextPeoplenextObituariesnextMary Hoy 1925 - 2011

When mains water came to Meldreth (1min 31 secs)
A transcription of this audio clip can be found at the bottom of this page. 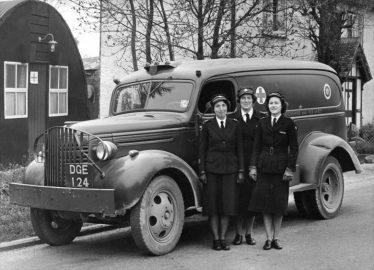 Mary, who died on 20 April aged 86, grew up in Meldreth at Belmington House in North End, where she lived with her parents and brothers Norman and Ralph.  Her mother, Daisy Dainty, was well known through her work in the Red Cross and her participation in the village life of Meldreth.

Mary enjoyed horse riding and swimming in the chalk pits at the Cam Lias Cement Works.  She was also a keen tennis player.  She was very friendly with Mary Findlay and Daphne Farnham.   She also spent time with Raymond Course, Peter Marr and Peter Ward.

During the war she was stationed in Barking and Walthamstow on radar duty.  In 1947 she married Tony Hoy who farmed on Newmarket Road and they lived at Hyde Hall Farm.  Mary had two sons, Will who was well known in the motor racing world, and James.

Mary lived life to the full.  She loved the countryside and animals.  In the fifties she and Tony could be seen in the company of Michael and John Walford and Gordon Handscombe on Meldreth tennis courts.  Mary was also a keen bridge player.

I interviewed Mary for Meldreth Local History Group in 2008 and it was a very enjoyable occasion with a lot of laughter.  During the interview Mary expressed a wish to make a visit to her old home in Meldreth and this took place in 2009.  Mary made an appearance at Michael Walford’s 90th birthday party in January of this year.

Click on the audio bar at the top of this page to hear Mary’s recollections of living in Belmington House, Meldreth.

Mains water was laid on just about the beginning of the war [WWII], I think, and before that, people who hadn’t got a well had to go and carry it in water carriers.   Our gardener, Whiting, where he got it from, was down North End, just a little way past the Church.  He had a water cart and I don’t know how many times a day he had to go down there.  The [mains] water when it first came to Meldreth, probably you’ve been told this before, well, the smell was terrible apparently.  Why I don’t know.

[Terry: Do you remember Mr Whiting’s Christian name?] George Albert.  He came from Lincolnshire and he was very bad tempered.  He loved my mother, and he quite liked me, but he hated my father.  I think my father tried to sort him out and he didn’t want any sorting out!

[Terry: Where did Mr Whiting live?]  He lived down the North End cottages, the Council Houses.  His wife used to take in washing.  Well, I don’t know whether she did, or perhaps it was just for us she did it.  They had a copper, [Terry: Yes, an old fashioned copper] Well, there was one of those at Belmington, I can just remember that, in the scullery.